FBI Analysis of ‘Rust’ Shooting Says Alec Baldwin’s Gun ‘Could Not Have Been Fired Without Pulling the Trigger’ or Striking the Hammer: Report 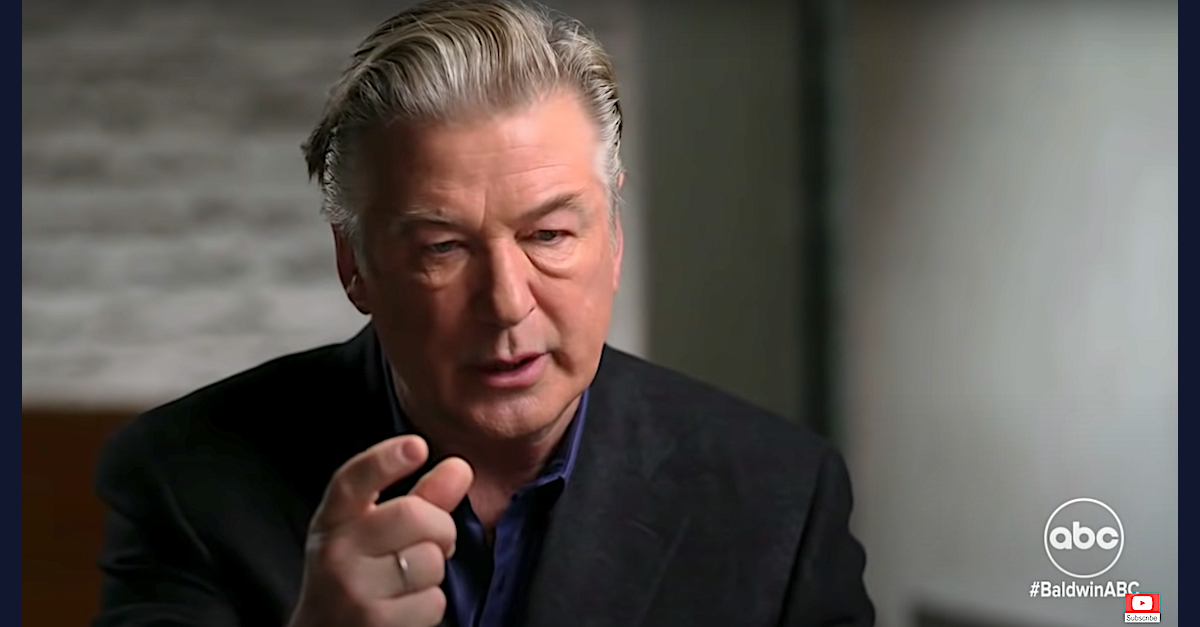 Alec Baldwin claimed in a December 2021 ABC News interview that he did not pull the trigger of a gun which fired a “lead projectile” and killed cinematographer Halyna Hutchins.

The FBI has completed a probe into the gun Alec Baldwin held when a so-called “lead projectile” killed cinematographer Halyna Hutchins on a New Mexico film set last year, according to a Friday night ABC News report.

The multi-byline story says an FBI accidental discharge analysis concluded that the “the firearm used in the shooting” on Oct. 21, 2021 “could not have been fired without pulling the trigger” — to borrow ABC’s paraphrasing of what it claims the law enforcement document asserts.

Hutchins was shot and killed while lining up what has been described as an “impromptu” scene for the since-scuttled low-budget Western movie “Rust.”

The FBI report further found that if the gun’s chamber was loaded and the hammer was not cocked, the hammer could fire a bullet “without a pull of the trigger when the hammer was struck directly.” Such an outcome was “normal for this type of revolver,” ABC said, again citing the FBI analysis.

Among the many questions surrounding the fatal shooting were whether the gun was somehow defective or whether its mechanisms were worn out and could have been set off without a precise pull of the trigger.

Baldwin told ABC News back in December that “the trigger wasn’t pulled” when Hutchins was shot.

“I didn’t pull the trigger,” he clarified. 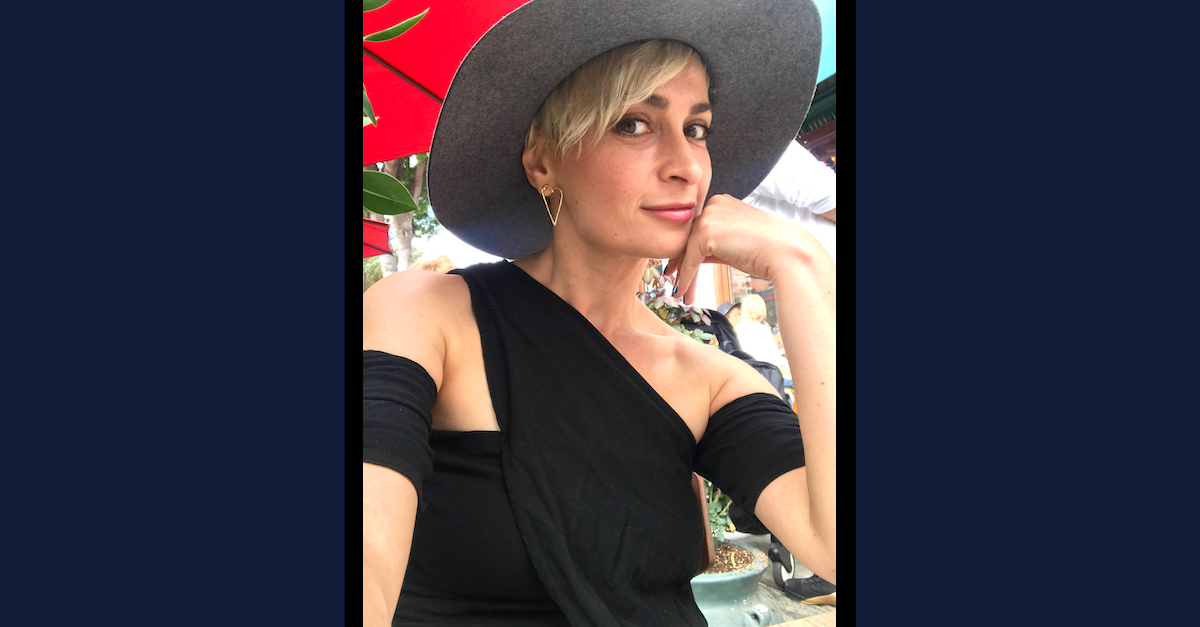 Halyna Hutchins appears in a photo released by her family’s attorneys.

The gun in question is a F.lli Pietta single-action revolver that fires .45 Long Colt cartridges.

ABC’s report on the document did not indicate whether the FBI analyzed the weight necessary to pull the trigger.  Many new guns will not fire unless at least approximately four pounds of weight is applied to the trigger; some guns require more weight — perhaps six pounds — to fire.  Some guns, called “heavy” guns, might require even more.  Some shooters change the springs in their trigger mechanisms to make them “lighter,” or easier to fire using less weight.  A “lighter” gun is generally considered by shooters to be more accurate for sport shooting.

A “light, 2-pound trigger is probably not the best idea for a defensive pistol,” one gun website attests.  “In the case of self-defense, you want to be certain and deliberate, so many gun owners will choose a handgun with somewhere around 5 to 8 pounds of trigger-pull weight.”

It is unclear from the ABC report how much weight was necessary to successfully pull the trigger of the the weapon Baldwin held — or whether the gun was a “light” gun with a hair trigger. 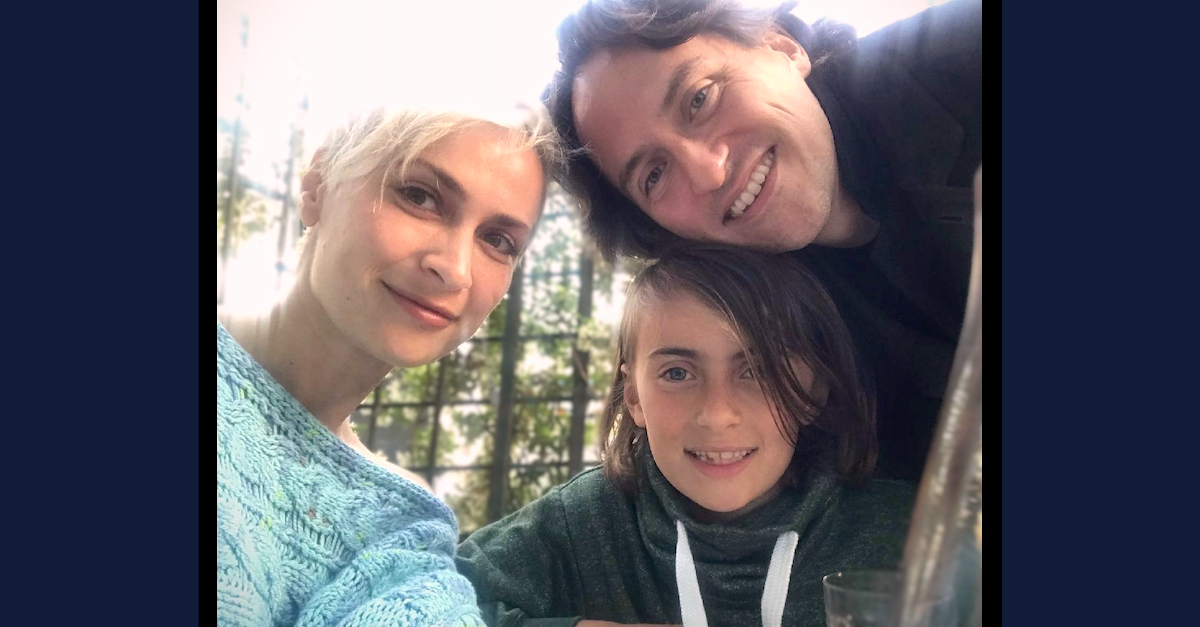 The Santa Fe County Sheriff’s Office told ABC that it received the FBI report referenced by the network and other documents as part of its investigation into the shooting.

The local prosecutor’s office has not decided whether to file charges in the case, according to ABC, because authorities in the Land of Enchantment are still waiting to receive all of Baldwin’s phone records.

Baldwin said he gave his phone to the authorities for their investigation in mid-January.  His attorneys said it contains “no answers,” Law&Crime has previously reported.

First Judicial District Attorney Mary Carmack-Altwies explained on Aug. 3 that her office would employ a “screening process” once it assembled all of the necessary paperwork:

To date, my office has received portions of the Rust investigation from SFSO but is still awaiting the balance of supplemental reports including, but not limited to, the following: FBI firearm and tool mark analyses, forensic testing on the firearm itself, the forensic download from Suffolk County PD of Mr. Baldwin’s phone, and the pathology report from the New Mexico Office of the Medical Investigator. Once SFSO receives those—and any other outstanding items—and completes its supplemental reports, the screening process will begin, and my team and I will make a charging decision.

“Death was caused by a gunshot wound of the chest,” read a medical examiner’s report obtained by the network.  “Review of available law enforcement reports showed no compelling demonstration that the firearm was intentionally loaded with live ammunition on set.”

“Based on all available information, including the absence of obvious intent to cause harm or death, the manner of death is best classified as accident,” the medical examiner reportedly concluded. 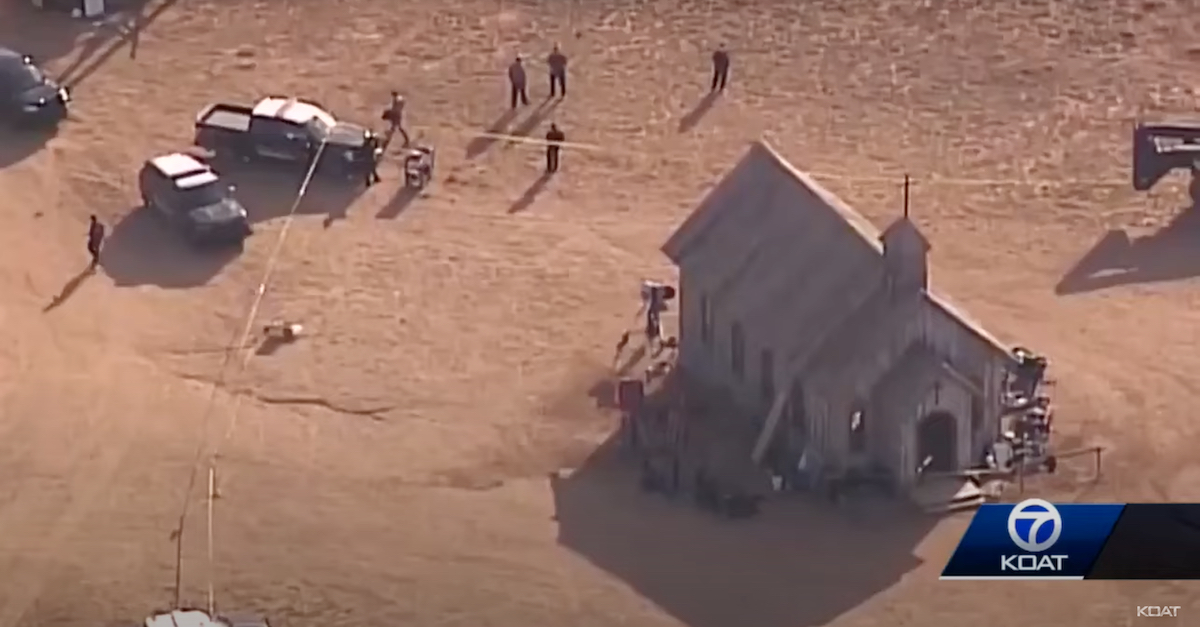 A KOAT-TV screengrab shows police activity at the Bonanza Creek Ranch near Santa Fe, N.M., after a deadly shooting on the set of the film “Rust” on Oct. 21, 2021.

A civil lawsuit filed by Hutchins’ family (and previously reported by Law&Crime) characterized the shooting in these terms:

The film’s armorer filed a separate civil lawsuit which alleges that a supplier provided reloaded ammunition — bullets which contained a propellant but which looked like “dummy rounds” — for the production of “Rust.”  Dummy rounds look like real bullets but contain no gunpowder or propellant.  They are not supposed to fire and are generally manufactured with holes in their sides to prove that no propellant is contained within them.  Blanks contain a propellant but no projectile; they can make a sound and emit smoke but are not supposed to expel anything lethal.

“Rust” was supposed to have been supplied only with dummies and blanks; no live ammo was to be used, the lawsuit says.  The armorer’s lawsuit says she loaded Baldwin’s gun with what she believed were six dummy rounds.  Apparently, the lawsuit says, at least one of the dummy rounds had been reloaded to function as a real bullet.

The lawsuit says an accidental discharge of a gun occurred on the “Rust” movie set on Oct. 16 — five days before Hutchins died.  In that incident, a blank was fired toward the ground, court documents indicate.

Baldwin’s representatives reportedly did not respond to requests for comment from ABC News or Variety.