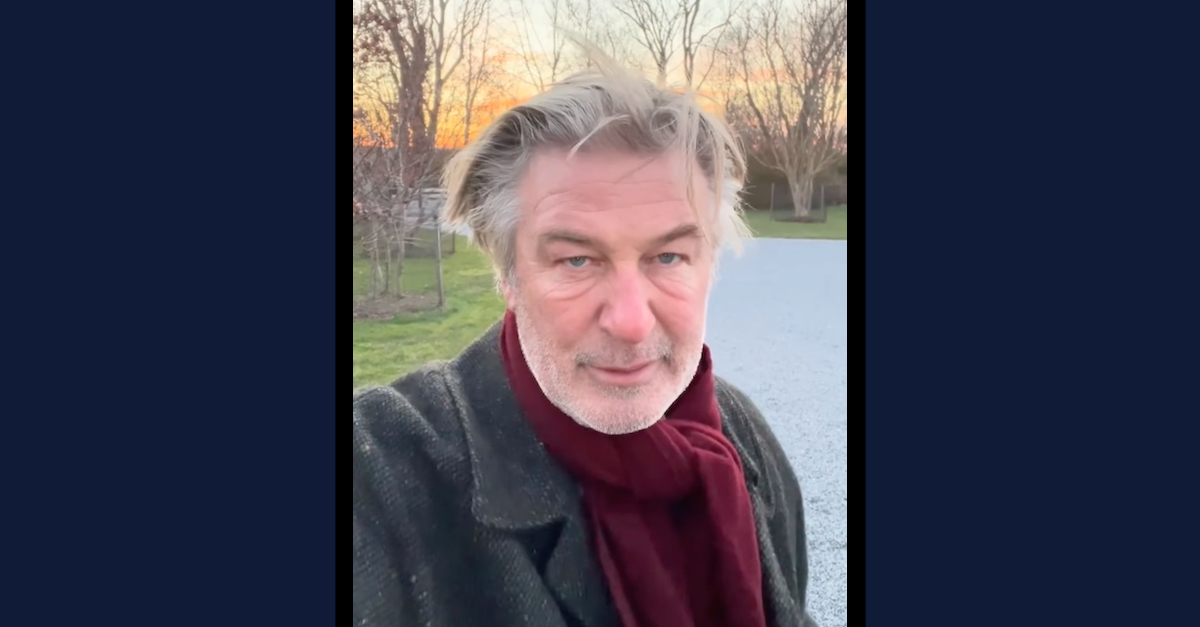 Alec Baldwin appears in a social media screengrab from a December 2021 holiday message he recorded for supports and fans.

Actor Alec Baldwin has turned his cellular telephone over to the authorities in connection with the deadly shooting of cinematographer Halyna Hutchins and the wounding of director Joel Souza on the set of the film “Rust.”

“The Baldwin cell phone was been turned over to Suffolk County law enforcement authorities,” Public Information Officer Juan Rios of the Santa Fe County Sheriff’s Office told Law&Crime’s Angenette Levy on Friday — presumably with reference to Suffolk County, N.Y. “They will gather information off the phone and provide the Santa Fe County Sheriff’s Office with the evidence gathered.”

“The Santa Fe County Sheriff’s Office does not yet have physical possession of the data to be retrieved off the Baldwin phone,” Rios continued. “This is in process.”

Baldwin’s attorneys, however, rubbished the notion that anything of evidentiary significance would be located on the mobile device.

“Alec voluntarily provided his phone to the authorities this morning so they can finish their investigation,” said Baldwin civil attorney Aaron Dyer. “But this matter isn’t about his phone, and there are no answers on his phone.”

“Alec did nothing wrong,” Dyer continues. “It is clear that he was told it was a cold gun, and was following instructions when this tragic accident occurred. The real question that needs to be answered is how live rounds got on the set in the first place.”

The transfer of the phone occurred one day after the Santa Fe County Sheriff’s Office issued a scathing press release which bemoaned its lack of possession of the long-sought cellphone.

The press release reminded the world that the sheriff’s office applied for a search warrant back on Dec. 16, 2021, and that the warrant was approved on that same date by a Sante Fe County Magistrate Judge.

The statement continues by saying jurisdictional issues quickly got in the way:

On December 20, 2021, the Santa Fe County Sheriff’s Office was advised that the Santa Fe District Attorney was in negotiations with Mr. Baldwin’s attorney to obtain consent to retrieve the phone and its contents. To date, the cell phone has not been turned over to authorities.

That apparently changed the day after the press release was issued.

According to the original Dec. 16 search warrant, investigators believe Baldwin’s cell phone is an Apple iPhone registered to Verizon.

The warrant says the sheriff’s office is seeking a “forensic download” of the Baldwin phone — which would include:

The warrant also seeks “[a]ll contacts, including names, phone numbers, addresses, and all other information included with the contact.

Officers are specifically after “all information and data from the cellular phone in relation to the production of Rust, and any member working on the production.”

However, “no information will be collected that is unrelated to the objective of the investigation,” the warrant notes.  The entire list of information sought from the phone is a page long.

Earlier this week, Hannah Gutierrez Reed, the armorer on “Rust,” filed a civil lawsuit against the prop supply house that allegedly provided the ammunition for the ill-fated film. Those court papers accuse Seth Kenney and his business PDQ Arm and Prop, LLC, of taking reloaded ammunition from a film set staffed by Gutierrez Reed’s father Thell Reed and supplying them to “Rust.” Law&Crime’s coverage of that lawsuit is here.

Read the warrant below: