Alec Baldwin Fired a ‘Lead Projectile’ from a .45 Revolver During Deadly Film Rehearsal; No Charges Filed Yet: Sheriff 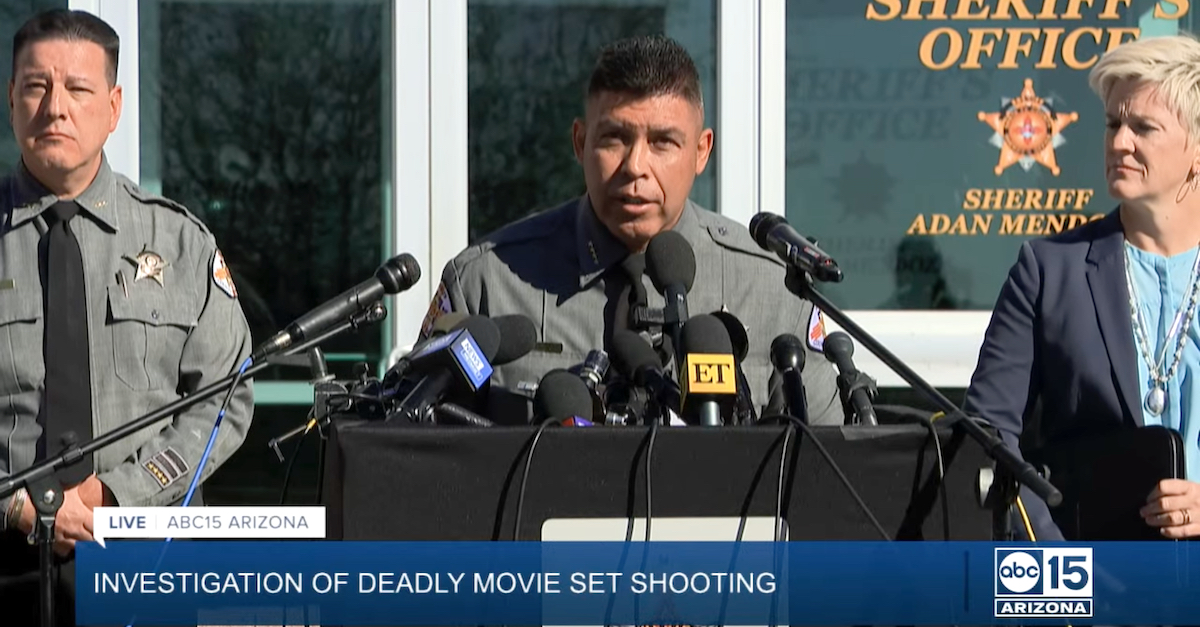 Speaking for the first time publicly, New Mexico authorities bemoaned “safety issues” and a feeling of “complacency” on an Alec Baldwin movie set where a cinematographer was shot and killed and a director was shot and injured last week. However, criminal charges have not been filed in the case, local law enforcement officials said Wednesday.

“There were a limited amount of movie set staff present” in the area where the shooting occurred, Santa Fe County Sheriff Adan Mendoza said at news conference at 10:00 a.m. local time in New Mexico.

The sheriff said his deputies collected 600 items of evidence, including three firearms, 500 rounds of ammunition, clothing, and accessories. The 500 rounds included blank rounds (which create noise and a muzzle flash but do not expel a projectile), dummy rounds (which look like real bullets but are not packed with any propellant and are therefore inert), and what appear to have been live rounds. However, the Mendoza said the suspected live rounds had been sent to the FBI for testing and analysis to ascertain a precise count.

“We’re going to determine how those got there and why they were there,” Mendoza said of what his office suspected to be live rounds. He agreed generally that live rounds “shouldn’t be” present on a movie set for safety reasons.

Two of the three guns recovered from the “Rust” set were non-functioning prop weapons, the sheriff said. The third, used by actor Alec Baldwin to rehearse a scene when the shooting occurred, was a fully functioning .45 revolver.

The sheriff said the bullet recovered from Souza’s shoulder by medical personnel was best described as a “suspected live round,” though at times he spoke as if that conclusion had already been made. At one point, he said the round was a “lead projectile.” The sheriff added that his office suspected that a single so-called “projectile” entered and exited Hutchins before becoming lodged in Souza’s body but that a medical examiner’s report would provide a definitive answer about how many shots were fired.

“It’s too early right now in the investigation to comment on charges at this point,” the sheriff said.

District Attorney Mary Carmack-Altwies said her office was “not at that juncture” of determining whether the facts would lead to criminal charges under New Mexico law.

“I am a prosecutor that was elected in part because I do not make rash decisions and I do not rush to judgment,” Carmack-Altwies said. She demurred yet again when asked about the possibility of criminal negligence charges.

“All options are on the table at this point,” Carmack-Altwies said when asked if film star Alec Baldwin could hypothetically be charged. “No one has been ruled out.”

“He is an active part of this investigation,” the sheriff said in response to questions about Baldwin. “He has been cooperative,” he later added several times.

When asked how two people managed to inspect the gun and to not determine it was loaded with a “live round,” the sheriff said additional interviews were necessary.

The sheriff wouldn’t comment on how suspected live rounds ended up on the set. He called for others — including anyone who previously lodged complaints about safety practices on the set — to contact his office. He said he was aware of “rumors” of labor unrest during the production that required further investigation.

The sheriff said his office had not sought additional search warrants for locations other than the movie set. He said approximately 100 people were on set but that only a small number of people were present in the immediate area where the shooting occurred.  Though the thought remained unstated at the press conference, it was left to the imagination that the investigation is therefore sprawling in scope given the number of individuals with potential access to the scene and the generally transient nature of the work.

The sheriff said he was unsure if Baldwin remained in New Mexico or had traveled elsewhere.

“Any time firearms are involved, safety is paramount,” the sheriff said when asked to clarify his comments about “complacency” on the set. The prosecutor said allegations of complacency did not automatically mean criminal negligence occurred.

According to search warrants, assistant director Dave Halls handed the gun to Baldwin. Hannah Gutierrez–Reed, the film’s armorer, had prepared a cart of guns before Halls removed one of the weapons for Baldwin’s use last Thursday when the shooting occurred. The sheriff confirmed both Halls and Gutierrez-Reed had been interviewed by law enforcement.

The search warrants strongly suggest that Gutierrez and Halls prepared the scene before the entire crew broke for lunch.  They then returned to recommence filming.  Souza told law enforcement he was “not sure if the firearm was checked again” after lunch — raising questions about the chain of custody of the weapons and ammunition that thus far remain unanswered.

Souza said filming “was taking longer than usual” last Thursday when the shooting occurred because one crew walked off the set.  Souza said a replacement crew was located but that “everyone was getting along” and that “there were no altercations that took place to his knowledge.”  Still, the production was down to just one camera, the warrants indicate.

Watch the press conference below via NBC News:

[Editor’s note:  this report has been updated with additional details since its initial publication.]