Cops Seize Bucket of ‘Ammunition’ from Alec Baldwin Movie Set; Armorer Claims to Have ‘No Idea’ Where Live Rounds Came from 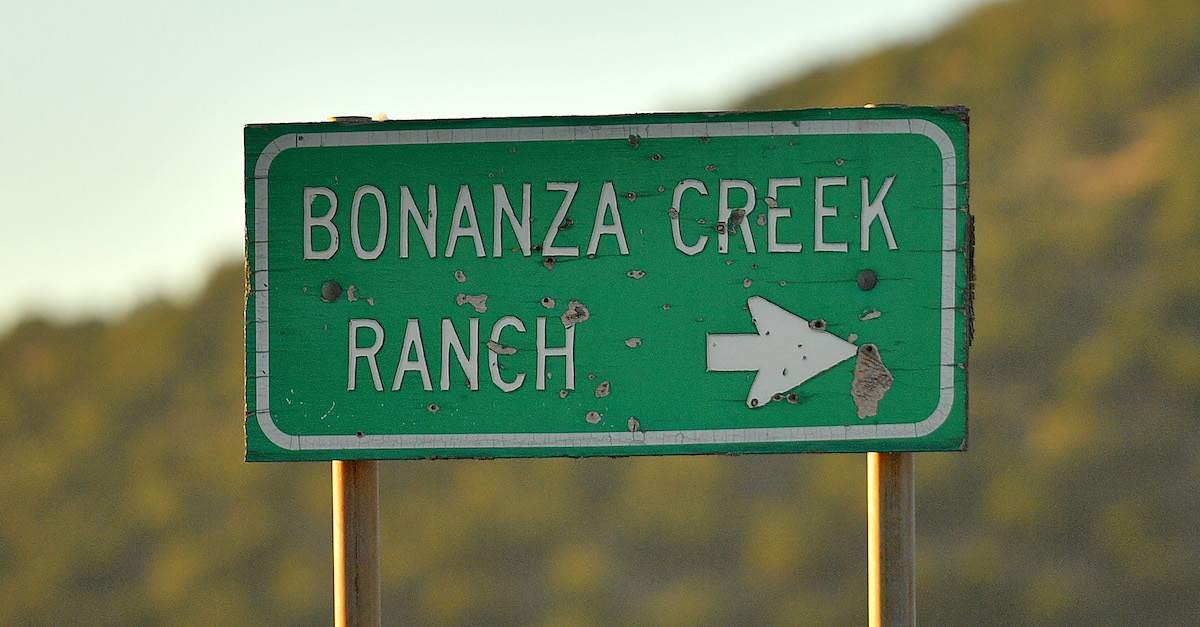 A sign points to the direction of the Bonanza Creek Ranch where a fatal shooting occurred on a movie set on October 22, 2021 in Santa Fe, New Mexico. Director of Photography Halyna Hutchins was killed and director Joel Souza was injured on set while filming the movie “Rust” with actor and producer Alec Baldwin.

Investigators have seized cardboard boxes, black bags, and buckets containing ammunition from a prop truck used on the set of the Alec Baldwin movie “Rust.” That’s according to a court document filed Friday in Santa Fe County, New Mexico. The seizures were catalogued as the film’s armorer released a statement through her attorneys that said she “has no idea where the live rounds came from.”

The court document, a standard warrant return, is a catalog of items collected by sheriff’s office investigators pursuant to a search warrant issued Wed., Oct. 27. The warrant return states that authorities seized a bandolier with miscellaneous ammo, cardboard boxes with miscellaneous ammo, several black bags containing ammunition (one of which also contained a replica rubber revolver), an “empty ammo box,” and miscellaneous ammunition from a bucket. Also seized were a round from a Colt .45, gun tags, a spent blank, and five revolvers.

The warrant return is unclear as to the nature of the ammunition seized this week from the prop truck. Santa Fe County Sheriff Adan Mendoza said earlier in the week that any ammunition seized would be tested by the FBI to determine its precise nature and character. Movie sets generally employ “blanks” (which generally contain gunpowder and which create a flash, smoke, and a loud noise) and “dummy” rounds (which are designed to look a lot like real bullets but which contain no propellant and are totally inert).

Affidavits submitted pursuant to the warrant explained that armorer Hannah Gutierrez and assistant director David Halls checked the gun Baldwin was to use. The gun was locked in a safe inside a truck while the crew broke for lunch. Prop master Sarah Zachary retrieved the weapon and brought it to the chapel on set where a rehearsal with Baldwin was to occur. Director Joel Souza said he was not sure if the gun was checked again before he and Halyna Hutchins were shot after lunch. Hutchins died.

It was unclear from the original warrant who locked the the gun in the safe. Gutierrez said Zachary gave the gun to her after retrieving it. Gutierrez said she provided the weapon to both Halls and Baldwin during the post-lunch rehearsal.

According to the original paperwork filed Wednesday, Halls said “he could only remember seeing three rounds” in the gun “before continuing rehearsal” — presumably after lunch and presumably after checking the gun again at that time.

Halls admitted “he should have checked all of them, but didn’t,” the documents says with reference to the rounds in the gun prior to the shooting. Halls also said he “couldn’t recall if she [Gutierrez] spun the drum” so he could see the entire array of ammunition inside the revolver.

However, after the shooting, Halls said “he could only remember seeing at least four ‘dummy’ casings with the hole on the side, and one without the hole.” That suggests five rounds were in the gun after the shot rang out.

“He advised this round did not have the ‘cap’ on it and was just the casing,” the affidavit continued with reference to the apparent fifth round.

When an investigator “asked about live ammo on set, Hannah responded no live-ammo is ever kept on set,” the warrant affidavit states. Souza said live ammunition should “never” be “near or around the scene.”

Attorneys for Gutierrez on Friday released a statement that said “untruths that have been told to the media” involving their client — statements “which have falsely portrayed her and slandered her.” The statement reads, in part:

Safety is Hannah’s number one priority on set. Ultimately this set would never have been compromised if live ammo were not introduced. Hannah has no idea where the live rounds came from. Hannah and the prop master gained control over the guns and she never witnessed anyone shoot live rounds with these guns and nor would she permit that. They were locked up every night and at lunch and there’s no way a single one of them was unaccounted for or being shot by crew members. Hannah still, to this day, has never had an accidental discharge. The first one on this set was the prop master and the second was a stunt man after Hannah informed him his gun was hot with blanks.

It continues by saying Gutierrez was working at an extreme pace to keep up with the demands of her superiors:

Hannah was hired on two positions on this film, which made it extremely difficult to focus on her job as an armorer. She fought for training, days to maintain weapons, and proper time to prepare for gunfire but ultimately was overruled by production and her department. The whole production set became unsafe due to various factors, including lack of safety meetings. This was not the fault of Hannah.

Read the full statement and the warrant return below: