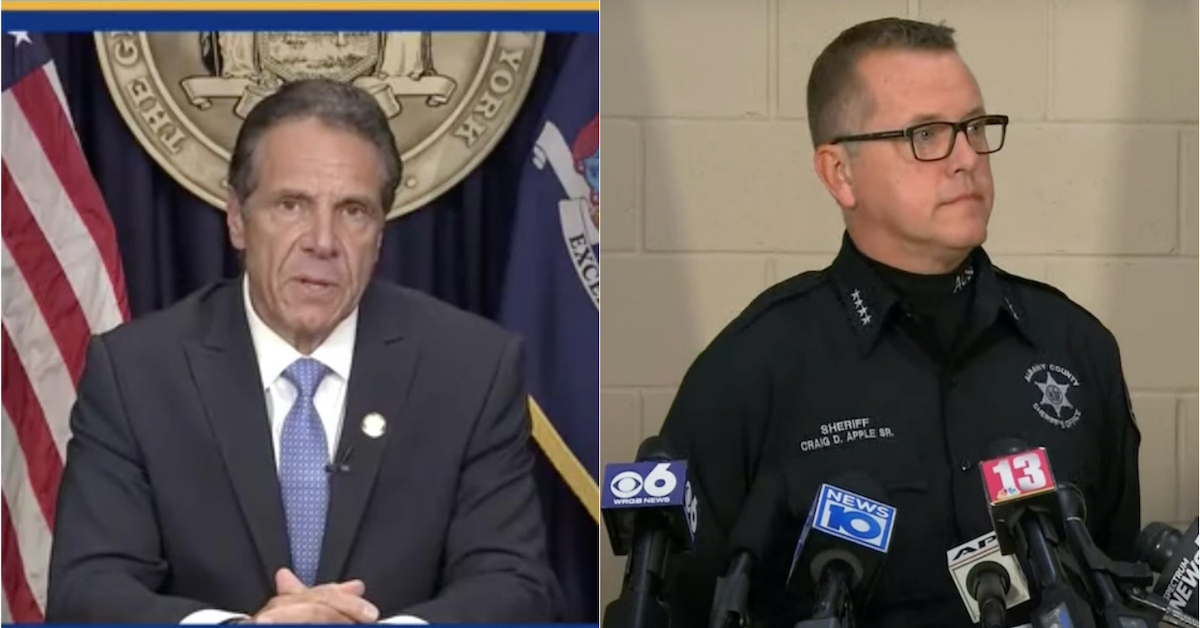 One day after the release of a criminal complaint against former New York Gov. Andrew Cuomo (D) appeared to have blindsided prosecutors and the alleged victim, an Albany sheriff defended his handling of the case — and asserted that charging papers were disclosed prematurely.

“I think we have an overwhelming amount of evidence,” Albany Sheriff Craig Apple (D) told reporters at a press conference on Friday afternoon. “We have, the victim’s been cooperating fully every day, every step of the way.”

On Thursday, the disclosure of a misdemeanor complaint accusing Cuomo of “forcible touching” under Section 130.52 of the New York State Penal Law surprised many.

Cuomo stands accused of groping the breast of a woman — redacted in the complaint but believed to be his former executive assistant Brittany Commisso — on the second floor of the governor’s mansion between 3:51 p.m. and 4:07 p.m. on Dec. 7, 2020.

When asked by reporters about the mixed signals, Apple professed to have been taken aback, too. The sheriff claimed that a court review of their papers usually takes time, and he said his office planned to convene with the relevant parties — namely the district attorney and the victim — before their time schedule unexpectedly shifted.

“This was this came back at a relatively accelerated rate kind of caught us by surprise, as well,” Apple said. “And needless to say, the document was released to the media and posted online.”

Though the sheriff attributed the reports to a “leak,” criminal complaints are public records under New York law.  Summonses — orders for defendants to appear in court and to face charges — are issued by the court and can take time.  Apple appeared to be conflating the two and was not pressed as to the differences by any of the reporters present.

Shortly before Cuomo’s abrupt resignation on Aug. 10, Apple held an extraordinary press conference on Aug. 7, where he declared of the ex-governor’s accuser: “She is, in fact, a victim.”

In the past, Cuomo’s attorney Rita Glavin highlighted the remark as evidence that law enforcement convicted her client in advance of an investigation, but Apple said he kept his promise at the time to conduct a “very comprehensive and methodical investigation.”

“We were not going to be rushed and we would not be delayed,” Apple said. “So over the course of the nearly four months to follow that, we have done just that—a very methodical investigation. Our investigators have sifted through hundreds of documents, if not thousands, executed several search warrants and interviewed numerous witnesses.”

Throughout the allegations of sexual harassment and assault, Cuomo’s defense team has accused law enforcement of political motivations. Apple denied those allegations.

“That is ridiculous,” the sheriff asserted. “We are an apolitical organization.  Maybe you folks aren’t from the area, but the people in the area — they’re pretty sure that it’s not a hit job.  We do our investigations.  We’re a very professional agency.  And I took an oath, and we took a complaint.  And we followed through with it and we did like every police department and sheriff’s office should have done.”

(Screenshots of Cuomo from NY.gov and of Apple from Global News/YouTube)