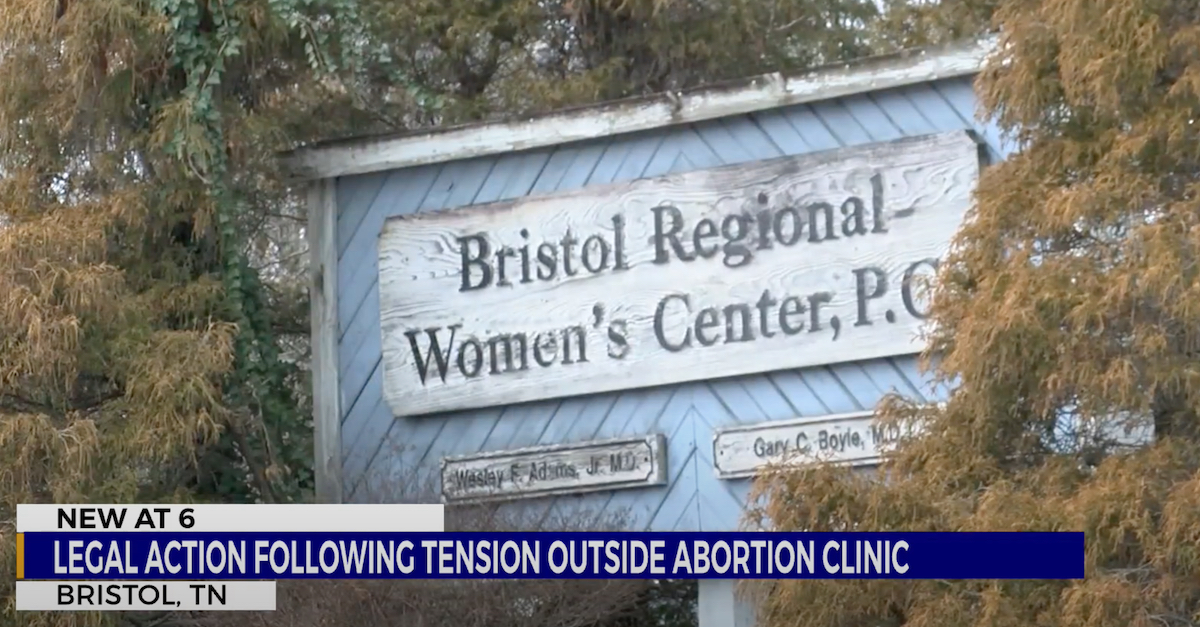 A video screengrab from WJHL-TV shows the sign to the Bristol Regional Women’s Center.

The Sixth Circuit Court of Appeals on Thursday upheld a 2015 Tennessee law which requires women to attend two separate in-person sessions with a doctor at least 48 hours apart before they are able to legally obtain an abortion. In so holding, the court rationed that the waiting period was not a “substantial obstacle” which posed an “undue burden” to women seeking to terminate their pregnancies prior to viability — the point when a fetus is able to live outside the womb.

The case, styled as Bristol Regional Women’s Center v. Slatery, is an en banc opinion, meaning every available judge on the 16-person circuit heard the matter. The final vote was 9-7, and it flipped a previous 136-page opinion by lower federal district court in just 13 tidy pages of facts and analysis.

Before making life’s big decisions, it is often wise to take time to reflect. The people of Tennessee believed that having an abortion was one of those decisions. So they passed a law requiring a waiting period of 48 hours. Although the Supreme Court upheld a similar 24-hour waiting period in Planned Parenthood v. Casey, the district court said that Tennessee’s waiting period violates a woman’s right to have an abortion. We disagree and reverse.

The Sixth Circuit Court of Appeals, based in Cincinnati, Ohio, was appointed almost entirely by Republican presidents. Presidents Trump and George W. Bush appointed six and five judges respectively; Bill Clinton and Barack Obama appointed three and two judges respectively. But the vote was not a straight so-called party-line affair: while every Trump and Bush judge and voted to uphold the state restrictions, two Bush judges joined every Clinton and Obama judge on the dissent.

The 13-page majority opinion recapped Tennessee’s attempts to enact the 48-hour waiting period dating back to 1978 — some five years after Roe v. Wade but well before the 1992 decision of Planned Parenthood v. Casey. Casey held that a 24-hour waiting period was constitutional; Tennessee and other advocates who supported the 48-hour ban said the difference was legally immaterial.

Citing itself in a previous case, the Sixth Circuit articulated the proper legal standard through which to examine the law as follows:

A law regulating abortion is facially valid if it meets two requirements: (1) the law is “reasonably related to a legitimate state interest,” and (2) the law does not place a “substantial obstacle” in the path of a large fraction of women “seeking an abortion of a nonviable fetus.”

As to the first prong of the analysis, the opinion held that the courts have little power to second-guess state legislatures — at least in the area of abortion (citations omitted):

If this standard appears “highly deferential,” that’s because it is. The rule is designed to respect the constitutional prerogatives of democratically accountable legislatures and executives. So under rational basis scrutiny, an act remains constitutional even if—to the judge’s eye—it seems to offer “little if any benefit.” All that matters is whether the state conceivably had a rational basis to enact the regulation at issue, judged under the standards of “traditional rational-basis review.”

In Casey, the Supreme Court held that abortion waiting periods are rationally related to at least two legitimate state interests. First, they are “a reasonable measure to implement the State’s interest in protecting the life of the unborn.” Casey, 505 U.S. at 885 (joint opinion). And second, they are a reasonable way to ensure that a woman’s consent is “informed and deliberate.” Id. Just as these rationales justified Pennsylvania’s 24-hour waiting period, so too do they justify Tennessee’s 48-hour waiting period. Thus, Tennessee had (as a matter of law) a rational basis for enacting its waiting period.

Here, the Supreme Court has already told us that abortion waiting periods clear this very low bar. “The idea that important decisions will be more informed and deliberate if they follow some period of reflection [is not] unreasonable, particularly where the statute directs that important information become part of the background of the decision.” Casey, 505 U.S. at 885 (joint opinion); see also EMW Women’s Surgical Ctr., P.S.C. v. Beshear, 920 F.3d 421, 436–37 (6th Cir. 2019) (noting that informed consent is generally an important prerequisite to performing a medical procedure). And a legislature could conclude that some women, even if the number is small, will opt not to have an abortion after this period of reflection. Given Tennessee’s strong “interest in protecting the life of the unborn,” this sort of rational speculation is sufficient. Casey, 505 U.S. at 873, 885 (joint opinion). For these reasons, the Tennessee legislature had a rational basis to enact a 48-hour waiting period.

Later, the panel again hooked its decision to Casey by describing exactly the types of burdens the Supreme Court in 1992 held were permissible:

Precedent compels this result. In Casey, the Supreme Court held that Pennsylvania’s 24-hour abortion waiting period was not an undue burden. In doing so, the Court recognized that the law (1) would often cause delays of “much more than a day” given the need to schedule two appointments; (2) would be “particularly burdensome” for “those women who have the fewest financial resources, those who must travel long distances, and those who have difficulty explaining their whereabouts to husbands, employers, or others”; (3) might lead to women experiencing additional “harassment” or “hostility”; and (4) would have “the effect of increasing the cost and risk of delay of abortions.” Casey, 505 U.S. at 886 (joint opinion) (cleaned up). Still, the Court held that these findings were not enough to “demonstrate that the waiting period constitutes an undue burden.” Id. This was true even for the women most affected by the law, such as those with low incomes. Id. at 886–87.

Among the court’s findings was that “women in Tennessee continued to obtain abortions in large numbers after the waiting period took effect.”

Tennessee’s 48-hour abortion waiting period is facially constitutional. The law is supported by a rational basis, and it is not a substantial obstacle to abortion for a large fraction of women seeking previability abortions in Tennessee. And the plaintiffs failed to present any specific evidence to sustain their as-applied challenge. We thus reverse the district court’s decision and remand for entry of judgment in Tennessee’s favor on these claims. 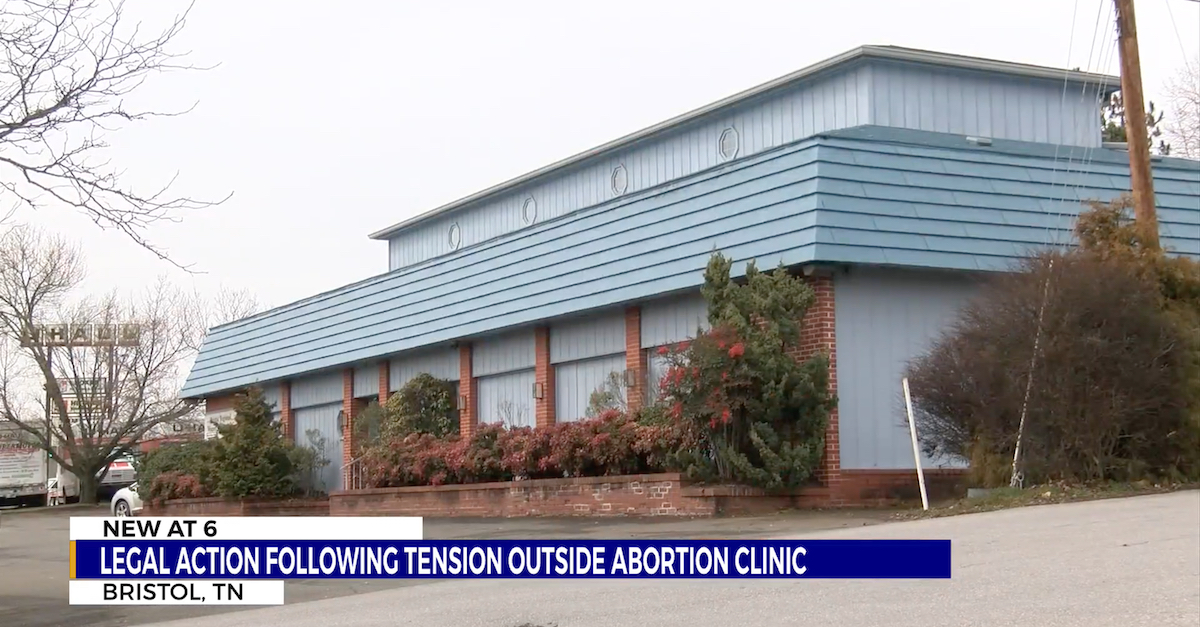 The exterior of the Bristol Regional Women’s Center is seen in an unrelated WJHL-TV story.  The organization was one of several plaintiffs in the action.

Circuit Judge John K. Bush, who was joined by Judge Richard Allen Griffin, “concur[red] fully” with the majority but wrote separately to bemoan that the courts have viewed abortion under unique legal standards separate from other areas of law.  Bush’s three-page concurrence latched in part onto Justice Clarence Thomas‘s dissent in Whole Woman’s Health v. Hellerstedt, a 2016 abortion case before the U.S. Supreme Court.

Judge Karen Moore Nelson joined six other colleagues to pen a 39-page dissent which easily outflanked the 16 pages of majority opinion and its concurrence.  The dissent accused the majority merely “dips a toe and recoils” when presented with the factual findings of the 136-page lower district court opinion.  Specifically (citations omitted):

“[T]he majority improvises a sanitized account of the record free of uncomfortable realities,” Nelson continued in dissent. “In whitewashing the record, the majority has crystalized what has been clear at least since it agreed to hear this case initially en banc without a principled basis: this case was dead on arrival.”

“An honest look at the record compels but one conclusion: a law that peddles in stigma, forces women into unnecessary and invasive surgical procedures, and forces low-income women to sacrifice basic necessities for themselves and their families in order to obtain an abortion is nothing if not an undue burden,” Nelson concluded.

Judge Julia Smith Gibbons penned a paragraph-long dissent to round out the case file.

Read the majority, the concurrence, and the dissents below:

[images via screengrab from WJHL-TV/YouTube]