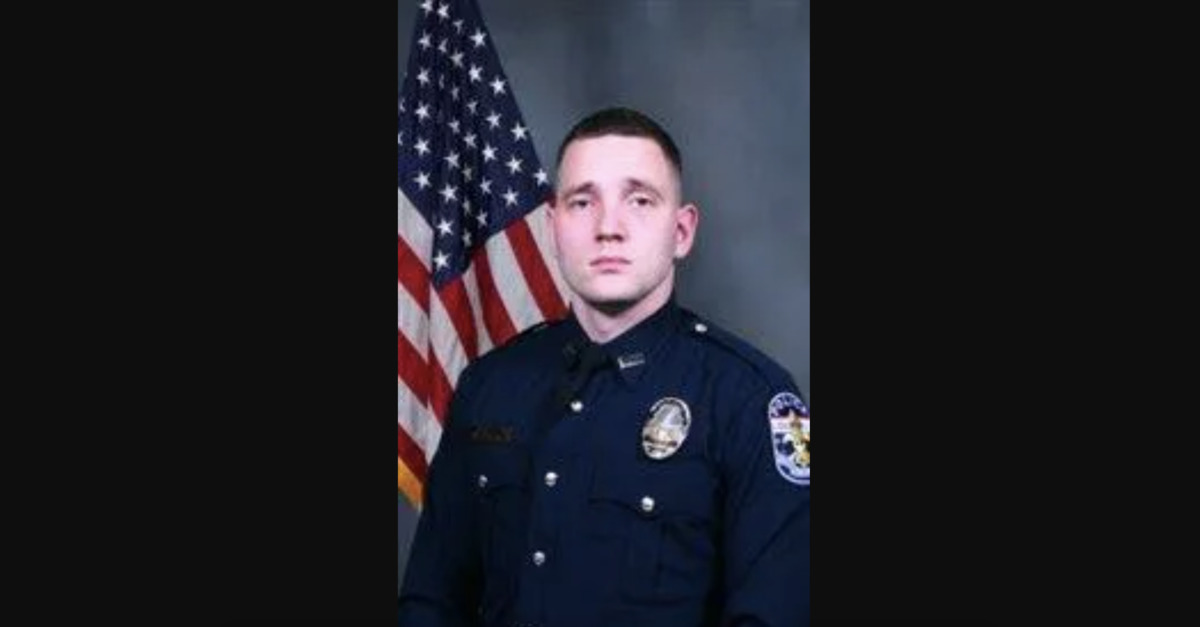 A former Louisville Metro Police officer pleaded guilty in federal court on Wednesday to hitting an already-detained protester on the back of the head with a “riot stick” during a Black Lives Matter demonstration in support of Breonna Taylor in late May 2020.

According to the U.S. Department of Justice, ex-officer Cory P. Evans, 33—who hails from Sellersburg, Indiana—was arraigned and pleaded guilty to one charge of deprivation of rights under color of law in the U.S. District Court for the Western District of Kentucky. Court records identify the injured protester only as “M.C.”

“[W]hile acting under color of law, [Evans] willfully deprived arrestee M.C. of the right, secured and protected by the Constitution and laws of the United States, to be free of an unreasonable seizure, which includes the right to be free from the use of unreasonable force by a law enforcement officer,” a criminal information states. “Specifically, the defendant, Cory P. Evans, in his capacity as an officer for the Louisville Metro Police Department, struck M.C. in the back of the head with a riot stick while M.C. was kneeling with hands in the air, surrendering for arrest. The offense resulted in bodily injury to M.C.”

“One of our most cherished fundamental rights in the United States is the right to peacefully protest against the government,” Clarke, a former civil rights attorney who currently heads the DOJ’s Civil Rights Division, said in a press release. “An officer’s use of excessive force to interfere with the right to protest is particularly damaging to our democracy, and the Department of Justice will continue to investigate and prosecute these cases to the fullest extent of the law.”

Details about the attack on the protester are scarce, but court records reviewed by Law&Crime show that Evans obtained a defense attorney the day after he was charged. Little happened in the case for over a month.

In the interim, the government and defense came to an agreement, which Judge Rebecca Grady Jennings agreed to on July 20.

Here’s how the DOJ characterized the incident:

During the plea hearing in federal court, Evans admitted that on May 31, while he was working as a part of the Louisville Metro Police Department Special Response Team, he followed a group of individuals around downtown Louisville to execute arrests for unlawful assembly and violations of curfew. Around the intersection of Brook and Broadway, the victim surrendered for arrest by getting on his knees and placing his hands in the air. While the victim was kneeling in this position, the defendant struck the victim in the back of the head with a riot stick, which created a wound on the back of the victim’s head. The victim fell forward and was taken into custody by other officers.

Evans now faces a maximum sentence of 10 years in prison and up to a $250,000 fine. His sentencing is currently slated for Nov. 23.

“Every citizen has the right to expect law enforcement officers to act in accordance with the laws they have sworn to uphold,” FBI Acting Special Agent in Charge Edward J. Gray said in a statement. “We entrust law enforcement officers with great power and authority, which we, as a community, expect them to wield with the utmost integrity. This case provides another example that abusing that power and authority will not be tolerated in Louisville.”

According to the Courier-Journal, Evans was put on leave shortly after the incident and he was fired from his job shortly after being indicted.

“The chief’s office immediately referred these allegations to federal authorities when they came to light,” the department said in a statement released on June 9. “Internal investigations were stayed in deference of the federal investigations, and Officer Evans was placed on administrative reassignment. The federal investigations resulted in Evans’ indictment yesterday. Officer Cory Evans was served with pre-termination paperwork today. Beyond that, we would refer you to the U.S. Attorney for details.”

Evans had been accused of abusive policing before his criminal prosecution.

In 2018, bystanders taped Evans—flanked by two other officers—repeatedly punching a Black man during a traffic stop.

The alleged victim, Jarrus Ransom, sued the City of Louisville and Evans along with two other officers in a lawsuit accusing them of a “vicious assault” and trying to “conceal the truth.” His mugshot from the arrest showed that he suffered a black eye and had to be outfitted with a neck brace.

While the city was removed as a defendant, the civil lawsuit is still pending in the same federal court system against all three officers.

In December 2019, the department cleared Evans of any wrongdoing in the Ransom attack and did not discipline him. Evans’s attack on the protester occurred some six months later.