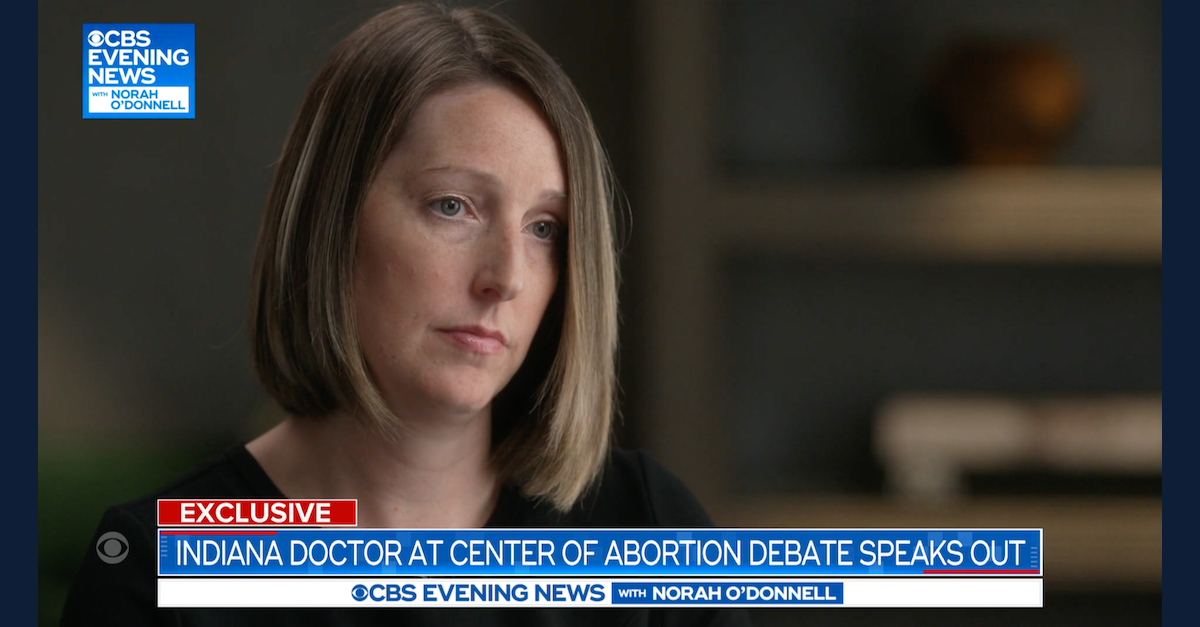 Indiana Attorney General Todd Rokita (R) on Wednesday filed an administrative law complaint against Dr. Caitlin Bernard, a doctor who performed an abortion on a 10-year-old rape victim from Ohio over the summer.

The girl’s case gained national attention in the wake of the U.S. Supreme Court’s decision in Dobbs v. Jackson Women’s Health Organization to leave abortion regulations up to the states. Ohio’s laws prevented the girl from terminating the pregnancy there, and Bernard’s provision of a legal abortion in Indiana led to immediate criticism from the attorney general of her state — and to an investigation that Rokita vociferously announced on FOX News Channel.

Rokita’s Wednesday filing argues that Bernard violated patient privacy laws by repeating the basic outlines of the girl’s story to the press — albeit without naming or otherwise identifying the patient specifically. It also alleges that Bernard violated Indiana law by failing to report the incident as a case of child abuse to Indiana authorities.

The document asserts four counts connected to alleged violations of state or federal statutes or regulations and one count for an alleged failure to “keep abreast of current professional theory and practice.” It concludes that Bernard is subject to professional discipline by a state licensing board and should be forced to pay “all costs incurred” by the case against her.

In a statement, Rokita accused Bernard of “fail[ing] to uphold legal and Hippocratic responsibilities by exploiting a 10-year-old little girl’s traumatic medical story to the press for her own interests.”

Rokita said Bernard’s concealment of the girl’s name while telling her store still “falls far short of her legal and ethical duties.” Or, in other words, even though Bernard kept clues surrounding the girl’s precise identity secret, Rokita says Bernard still revealed too much.

“Second,” Rokita continued in the document, “she failed to immediately report the abuse and rape of a child to Indiana authorities. This is required under Indiana law. Here, only Indiana authorities could have possibly stopped this little girl from being sent home to endure possible future harm by her alleged rapist.” 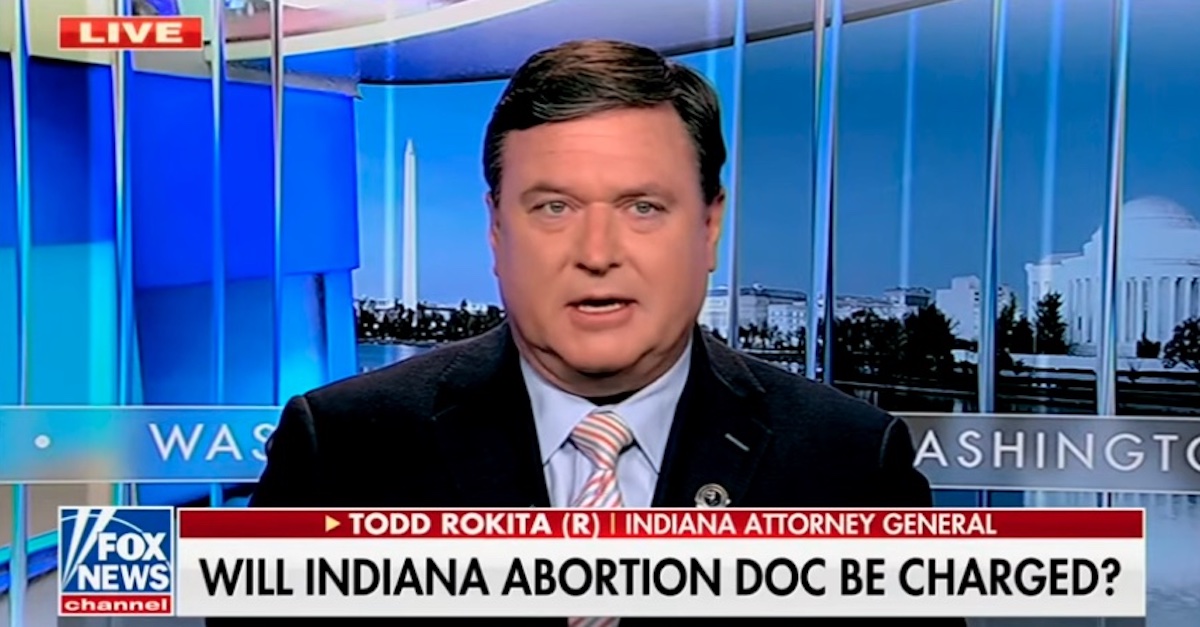 Rokita’s asserted interpretation of the relevant statute that might be problematic going forward.

As Law&Crime pointed out in July, the girl’s case was known to Ohio authorities, and Indiana’s law does not unambiguously state that an Indiana report must be generated if an out-of-state case of abuse becomes known to an Indiana doctor. Rather, the law excuses an Indiana individual from reporting child abuse if “a report has already been made to the best of the individual’s belief.”

Bernard testified last week that she had confirmed that child abuse authorities in Ohio were actively investigating the case before the girl arrived in Indiana for the abortion.  Bernard’s attorney has suggested that Bernard’s knowledge of — and participation in — the Ohio investigation is enough to satisfy the requirements of Indiana’s law.

“The Administrative Action filed today by Mr. Rokita is clearly a last-ditch effort to intimidate Dr. Bernard and other providers of abortion care,” said Bernard’s attorney Kathleen DeLaney. “The evidence and testimony from last week’s hearing confirmed that Dr. Bernard complied with all reporting requirements, cooperated with law enforcement officials, and discussed a case example only in a de-identified way, within the bounds of applicable privacy laws.”

“Mr. Rokita is doubling down on the frivolous consumer complaints by referring them to the licensing authorities,” DeLaney continued.  “Though I am disappointed he has put my client in this position, we are not surprised given Mr. Rokita’s consistent efforts to use his office to seek to punish those with whom he disagrees at the expense of Indiana taxpayers.”

Indiana’s core mandatory reporting statute for hospital staff members — one of the two aforementioned gravamen of Rokita’s action — doesn’t explain which “local” authorities need to be notified when a case of child abuse presents itself. The statute applicable to hospital staffers merely reads as follows:

(c) An individual notified under subsection (b) shall immediately report or cause a report to be made to:

The statutes don’t explicitly state that the authority to be notified must be an Indiana authority, but Rokita is alleging that Indiana authorities should have been notified nonetheless. His complaint notes that Bernard “submitted a terminated pregnancy report” and emailed the department of child services in Indiana that the “case was already reported through DCS in Ohio.”

“At no time prior to the 3:59pm email on July 2, 2022, did Respondent [Bernard] notify local law enforcement in Indiana or DCS concerning the possible child abuse she learned of on or before June 27, 2022,” the complaint alleges.  “After the child left the care of Respondent, she returned to Ohio, and upon information and belief, resided in the same home as her alleged rapist.”

Rokita’s complaint says Bernard testified that she was “unsure” whether her hospital’s social workers reported the case to Indiana authorities.

The document also maintains that Indiana authorities could have legally swooped in and assumed custody of the 10-year-old girl in question despite her status as an out-of-state resident and as a victim of what by all accounts is an out-of-state crime. It alleges a child abuse report should have been made to authorities in Indiana within four hours of her presentment to Indiana doctors and that “swift action” could have been taken by Indiana authorities “to protect the child from being returned to a potentially dangerous situation.” Specifically, citing Indiana law, Rokita’s complaint says “the hospital may not release the child to the child’s parent, guardian, custodian, or to a court approved placement until the hospital receives authorization or a copy of a court order from the department [of child services] indicating that the child may be released.” Rokita’s office also cited the 2018 case of a traveler from New Jersey whose child was taken by Indiana authorities at a bus station; that case, the AG’s office suggested, is an example of how the process should have worked here.  The possible effects of such a move on the Ohio cases, which had already commenced, were not laid clear in the Indiana AG’s document.

Generally, as the above-referenced statute notes, it is the job of a team of social workers in an institutional health care setting to make the required reports of child abuse; each individual staffer, including each individual doctor, generally don’t make the reports directly. Such an institutional response is contemplated under Indiana law, but Rokita’s complaint seeks to hold Bernard to a different statute that creates a personal duty to report for every Indiana resident generally speaking.

It is unclear from the complaint whether or how the conflict between the general personal duty to report and the institutional procedures laid out for hospitals and doctors might be rationalized toward an outcome in this case.

And, here, the institutional reporting procedures were set in motion. Deputy Attorney General Mary Hutchison, whose signature appears under Rokita’s on Wednesday’s complaint, conceded on the stand in separate proceedings last week that Dr. Bernard properly and timely reported the case to social workers within the hospital.

Rokita’s complaint also notes that Bernard did, indeed, report the abortion itself within the three-day window contemplated for such reports under state law. Those reports are separate from actual child abuse reports under Indiana’s mandatory reporting law. Rokita initially alleged last summer that Bernard had not filed that report; that claim turned out to be incorrect.

He now claims his actions against Bernard are not about abortion.

“This case is not about whether an abortion was performed. It also is not about the Office exposing anyone’s medical file,” Rokita asserted in a Wednesday press release. “Those were arguments designed to thwart our investigation into the physician’s behavior.”

Any action against Bernard now rests with the state’s medical licensing board.

Gerson Fuentes, of Ohio, is charged in that state with raping the unnamed 10-year-old patient in question. Rokita’s Wednesday filing says Ohio authorities traveled to Indiana and obtained DNA samples that linked Fuentes to the 10-year-old victim. A criminal case against Funetes in Ohio has not yet been adjudicated.