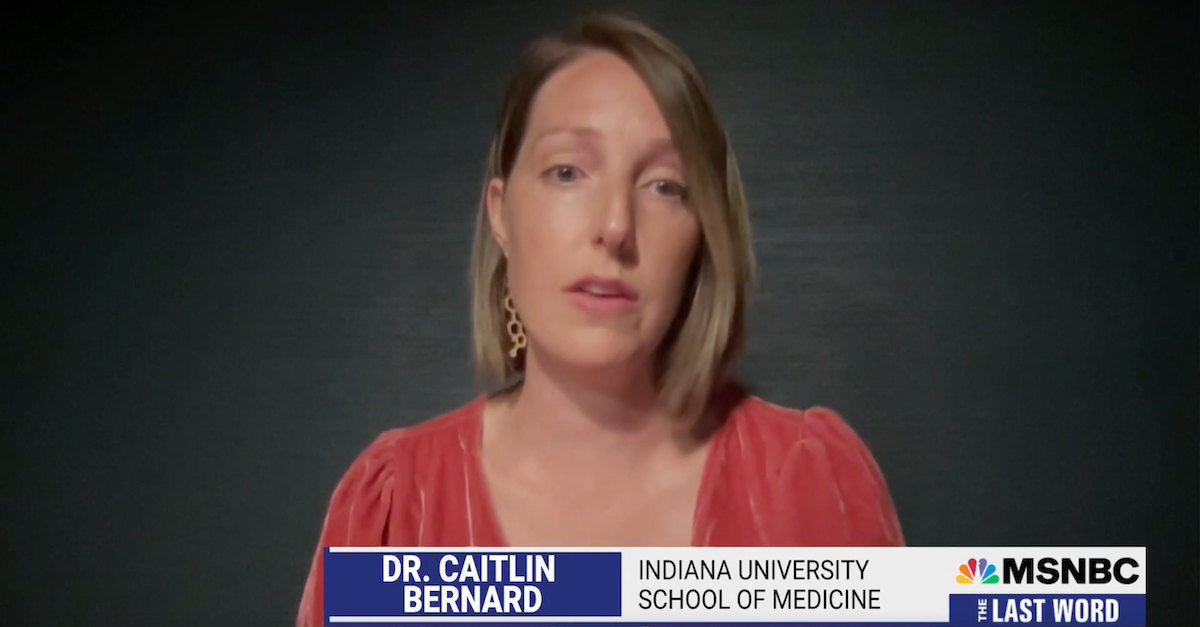 The Indiana doctor who became the target of right-wing ire after providing abortion care to a 10-year-old rape victim has signaled her intention to file a defamation claim against the Indiana Attorney General over statements he made about her on Fox News.

On Tuesday, representatives for Dr. Caitlin Bernard announced that they have filed a tort claim notice on behalf of their client, who they say was wrongly targeted by Indiana Attorney General Todd Rokita‘s comments to Fox News’ Jesse Watters during a segment about the story.

The girl’s ordeal gained national attention after a mention by President Joe Biden.

“Mr. Rokita’s false and misleading statements about alleged misconduct by Dr. Bernard in her profession constitute defamation per se,” the announcement, penned by Bernard’s lawyer Kathleen DeLaney, says. “The statements have been and continue to be published by or on behalf of Mr. Rokita and the Office of the Attorney General. To the extent that these statements exceed the general scope of Mr. Rokita’s authority as Indiana’s Attorney General, the statement forms the basis of an actionable defamation claim against Mr. Rokita individually.”

Bernard’s attorneys characterized the notice as the first step toward filing a possible lawsuit.

According to an Indianapolis Star report, the 10-year-old girl was forced to travel to Indiana in order to obtain an abortion because, at just over six weeks pregnant, she was outside the time limit during which Ohio law allows the procedure.

Media outlets and pundits on the political right doubted the veracity of the story; once it turned out to be true, they set their signs on the doctor who cared for the child.

“And then we have this abortion activist acting as a doctor with a history of failing to report,” Rokita told Watters during the July 13 show. “We’re gathering the evidence as we speak, and we’re going to fight this to the end, including looking at her licensure. If she failed to report it in Indiana, it’s a crime for – to not report, to intentionally not report.”

On July 14, Rokita issued a statement that he was investigating whether Bernard had reported the abortion, as required by Indiana law, as well as whether she violated federal privacy laws.

That statement, as of press time, is still on the website of the attorney general’s office.

However, also on July 14, media outlets published the state-mandated Terminated Pregnancy Report that Bernard had issued, showing that she had complied with state law. The documents had been obtained through public records requests.

And on July 15, Indiana University Health issued a statement confirming that Bernard had not violated privacy laws in her treatment of the girl.

DeLaney says the fact that the statement is still on Rokita’s website only adds to her client’s claim.

“The dollar amount of the loss is not ascertainable at this time, as the harm is ongoing,” DeLaney’s letter says. “Claimant intends to seek damages for security costs, legal fees, reputational harm, and emotional distress,” the letter says. “At this time, damages are undetermined.”

DeLaney says that the damage to her client could have been easily avoided, making Rokita’s alleged defamation even more apparent.

Statements that Dr. Bernard has a “history of failing to report,” which Mr. Rokita indicated would constitute a crime, made in the absence of reasonable investigation, serve no legitimate law enforcement purpose. Given the current political atmosphere in the United States, Mr. Rokita’s comments were intended to heighten public condemnation of Dr. Bernard, who legally provided legitimate medical care.

According to the notice, Indiana law required that people claiming to have been harmed by the state of Indiana, its agencies, or its officials, must file a Notice of Tort Claim within a certain time after the alleged act. After that, the state has 90 days to investigate or settle the claim, at which point Bernard can then file a lawsuit, according to DeLaney’s letter.

“Attorney General Rokita and the Office of Attorney General are leaders in the pro-life movement,” Kelly Stevenson, a spokesperson for Rokita’s office, told Law&Crime in an emailed statement. “His historic work has further distinguished Indiana as a protector of unborn life and women. This is part of a divisive narrative and an attempt to distract from the important work of the office, including the duty to determine whether practitioners have violated the standards of practice in his or her profession, as well as federal and state laws. We will defend against baseless claims.”

Editor’s note: This story has been updated with a statement from Rokita’s office.