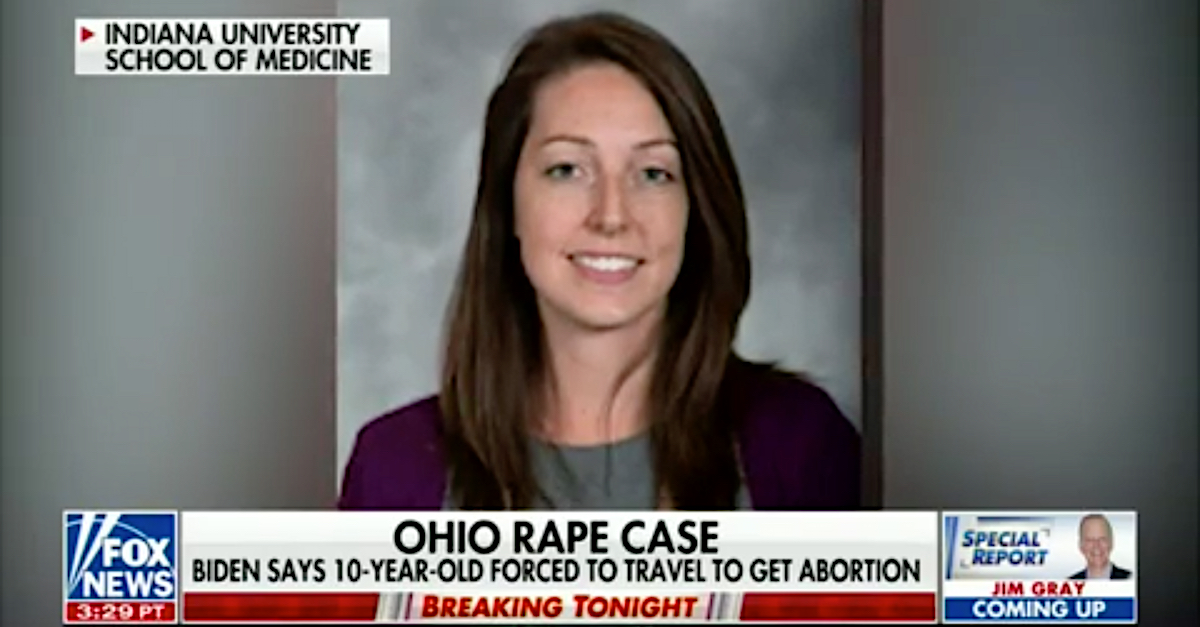 The Indiana doctor who provided an abortion to a 10-year-old girl from Ohio who had been sexually assaulted did not commit any violations of federal privacy law, the doctor’s employer has announced.

Dr. Caitlin Bernard, of Indiana University Health, was launched into the national spotlight following reports on Fox News. She provided the 10-year-old Ohio girl with a medical abortion on June 30. The girl had reportedly sought treatment in Indiana because Ohio bans abortions after six weeks; according to Bernard, who spoke to the Indianapolis Star for a July 1 story, the girl was six weeks and three days pregnant.

On Wednesday, Fox News had reported that Bernard was under investigation for violating the young girl’s privacy in contravention of HIPAA, the federal privacy law.

On Friday, IU Health issued an unambiguous vindication of the doctor.

“As part of IU Health’s commitment to patient privacy and compliance with privacy laws, IU Health routinely initiates reviews, including the matters in the news concerning Dr. Caitlin Bernard,” the emailed statement said. “Pursuant to its policy, IU Health conducted an investigation with the full cooperation of Dr. Bernard and other IU Health team members. IU Health’s investigation found Dr. Bernard in compliance with privacy laws.”

Indiana’s Republican attorney general, Todd Rokita, told Fox News’ Jesse Watters that his office was investigating whether Bernard violated any reporting laws. Indiana law requires any adult who believes that child abuse is taking place report the alleged abuse to either law enforcement or child services. State law also requires that doctors report every abortion that is provided in the state within 30 days of the procedure, and within three days if the patient is under 16 years old.

On Thursday, local Fox affiliate WXIN reported that it had obtained Bernard’s Termination of Pregnancy Report (TPR) through a public records request. The TPR showed that Bernard filed her reports on July 2, two days after the June 30 abortion.

Rokita’s office had sent a letter that same day to Gov. Eric Holcomb (R) asking the governor to order the Indiana Department of Health (IDOH) to comply with Rokita’s request for the TPR. In that letter, Rokita said the IDOH had not responded to his request, which is office made on July 11.

Other right-wing pundits and conservative media had been questioning the veracity of Bernard’s story for days, following a Washington Post effort to fact-check the details of the Indianapolis Star story.

Ohio Attorney General Dave Yost told Fox News on July 12 that there had been “not a whisper” of evidence to back up the story of the 10-year-old girl.

However, as the Columbus Dispatch reported on Wednesday, a police report about the rape was generated by Ohio police on June 22 following a referral from the victim’s mother. Gerson Fuentes, 27, has been charged with the assault.

On Friday, a woman identifying herself as the victim’s mother expressed support for Gerson, according to WXIN, citing a Telemundo report.

“Everything they are saying against him is a lie,” she reportedly said. Gerson, a Guatemalan national allegedly in the U.S. illegally, is being held on $2 million bond.

On Thursday, legal experts who examined relevant facts and law told Law&Crime that they saw no evidence of crime by Bernard — but they did see evidence of a “political witch hunt” by the attorney general.

Representatives for Rokita and Bernard did not immediately respond to Law&Crime’s requests for comment.