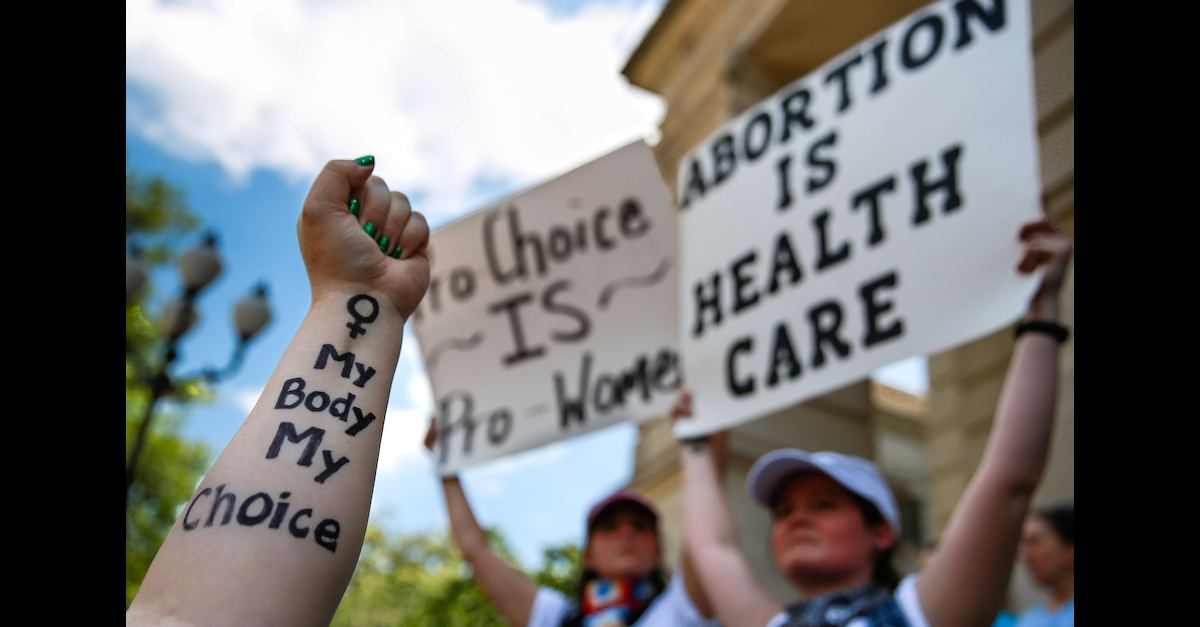 Women from hold signs during a protest against recently passed abortion bans at the Georgia State Capitol building on May 21, 2019 in Atlanta.

A federal district court judge in Arizona on Tuesday evening partially blocked a statewide abortion ban. The ban, known by its legislative moniker Senate Bill 1457, was due to take effect Wednesday. The bill sought to ban abortions which resulted from “a genetic abnormality of the child.” It created felony-level criminal penalties for people who perform, solicit, or in some cases fail to report the termination of a pregnancy for genetic reasons.

Judge Douglas L. Rayes, a Barack Obama appointee, legally agreed with two abortion doctors who sued on behalf of their patients for a preliminary injunction against the Arizona law. The ACLU, the National Organization for Women, and other plaintiffs and legal advocates were attached to the doctors’ case. The lead defendant is Arizona Attorney General Mark Brnovich.

Judge Rayes recapped some of the most critical language of S.B. 1457:

The judge scuttled a portion of S.B. 1457 which he referred to as “reason regulations.” Those are the regulations which ban abortions for certain reasons, e.g., genetic abnormalities. The judge said the other sections of the law, which he referred to as the “criminal liability, affidavit, and reporting provisions,” created an unconstitutional “undue burden” under Planned Parenthood v. Casey on the right for patients to “exercise their rights to terminate pre-viability pregnancies.”

The judge jettisoned some of the state’s legal logic in a footnote. He said the State of Arizona claimed that it was constitutionally “free to prohibit women from terminating a pregnancy” for what the state considered to be “discriminatory reasons” against a fetus likely to be born with a genetic disease. However, the judge said the state’s “position is incompatible with existing Supreme Court and Ninth Circuit precedent.”

“Arizona has chosen is not designed to encourage women choose childbirth; it is designed to thwart them from making any other choice,” the judge said at one point in a 30-page analysis which at times skewered the Supreme Court of the United States for injecting uncertainty into the law surrounding abortion in two recent decisions: Whole Woman’s Health v. Hellerstedt (2016) and June Medical Services LLC v. Russo (2020). In one section of his opinion, Judge Rayes employed two analyses he considered legally distinct — even though the parties didn’t brief those analyses — because he found the Supreme Court’s analytical framework on the issue to be incongruent. Either way, Judge Rayes said the analysis allowed him to reach the “same result.”

Among the judge’s myriad concerns were a “squishy” and “expansive” sections of Arizona state law which could impute broad standards of mens rea and scienter — the criminal and civil concepts of “knowledge” — upon doctors who performed abortions on fetuses with genetic abnormalities. The judge ruled that the law was simply too vague to withstand constitutional scrutiny because it allowed prosecuting authorities to basically guess whether a doctor was knowingly being called to abort a fetus with a genetic abnormality:

Arizona law defines “knowingly” to mean “that a person is aware or believes that the person’s conduct is of that nature or that the circumstance exists.” A.R.S. § 13-105(10)(b). It is unclear at what point in the multidimensional screening and diagnostic process a doctor can be deemed to be “aware” or “believe” that a fetal genetic abnormality exists. More troubling, however, is that “the distinct wording of this law requires that a doctor know the motivations underlying the action of another person to avoid prosecution, while simultaneously evaluating whether the decision is because of that subjective knowledge.”

“Arizona’s definition of ‘genetic abnormality’ does not amount to an objective criterion, and the ‘knowingly’ mens rea injects an extra dose of vagueness because it applies to the subjective motivations of another individual, even if not directly expressed,” the judge ruled. He continued to unpack the reasons why the law wouldn’t stand:

This problem is exacerbated by the reality that the decision to terminate a pregnancy is a complex one, and often is motivated by a variety of considerations, some of which are inextricably intertwined with the detection of a fetal genetic abnormality. For example, patients sometimes report that they are terminating a pregnancy because they lack the financial, emotional, family, or community support to raise a child with special and sometimes challenging needs. Can a doctor faced with such information truthfully execute the affidavit that § 10 of the Act requires? If a doctor accepts money to finance such an abortion, as both Drs. Isaacson and Reuss do, can that doctor face felony prosecution or a civil lawsuit?

The questions allowed the judge to explain why he found the law to be vague.

The judge also rubbished an argument from the state that a patient could simply find another doctor if the patient’s doctor learns or comes to suspect that the patient is trying to abort a fetus due to a genetic abnormality. The judge declared the state’s legislative goals would result in “doctor shopping” that would “be easier said than done.”

The judge left in place a so-called “interpretation policy” contained within Arizona’s S.B. 1457. That language gave any “unborn child at every stage of development” full legal rights:

A. The laws of this state shall be interpreted and construed to acknowledge, on behalf of an unborn child at every stage of development, all rights, privileges and immunities available to other persons, citizens and residents of this state, subject only to the constitution of the United States and decisional interpretations thereof by the United States [S]upreme [C]ourt.

B. This section does not create a cause of action against:

1. A person who performs in vitro fertilization procedures as authorized under the laws of this state.

2. A woman for indirectly harming her unborn child by failing to properly care for herself or by failing to follow any particular program of prenatal care.

C. For the purposes of this section, “unborn child” has the same meaning prescribed in section 36-2151.

As part of the analysis, the judge dropped another interesting footnote about terminology:

Plaintiffs refer to those who are pregnant as “pregnant people.” This gender-neutral term reflects the reality that not all people who become pregnant, seek abortion care, or have children identify as women. Arizona’s statutes and the judicial decisions that the Court will be discussing in this order refer to pregnant people as women and use feminine pronouns. To avoid confusion, the Court will do the same in this order. The Court’s intent, however, is not to ignore or write off trans and non-binary people who experience pregnancy.

Editor’s note: legal citations have been omitted from some quotes in this piece to make it easier to read. The full citations are available in the document embedded above.