Swing States Trump Lost Respond to Texas Lawsuit at SCOTUS: This Is a ‘Seditious Abuse of the Judicial Process’ That Should Never Happen Again 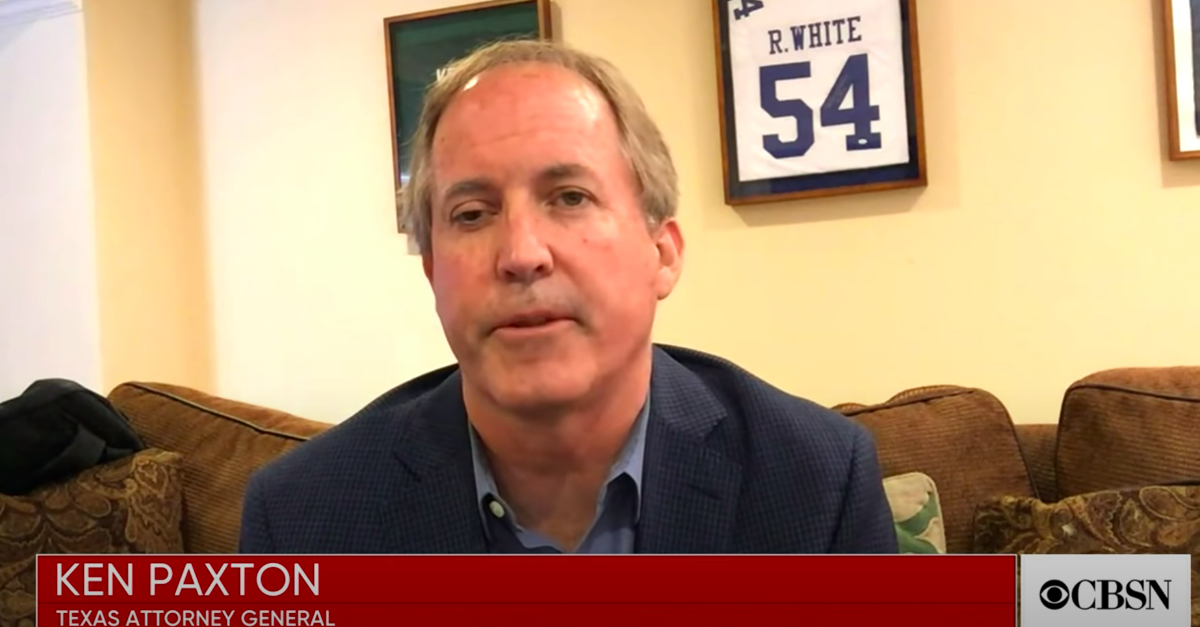 Texas filed a motion for leave to file a bill of complaint on Tuesday. Numerous amicus briefs have been submitted; the president has attempted to intervene. The Supreme Court has not agreed to hear to the case, contrary to the disinformation you may have come across in some quarters of the internet. But the defendant states were told to respond to Paxton’s gambit by 3 p.m. on Thursday. They did so, and they each asked the Supreme Court to deny Paxton leave to file the bill of complaint. They also said Paxton’s motion for injunctive relief and all other requested relief should be denied for lack of standing.

The Paxton lawsuit, which seeks the Supreme Court’s “original jurisdiction” in a state v. states action to overturn the election as Trump literally desires, has been panned by election law experts as a “dangerous” stunt that has “no chance” of succeeding. Even Republican Sen. Ben Sasse (R-Nebraska) openly suggested on Thursday that Paxton was just fishing for a pardon. Paxton is under FBI investigation. He was recently accused of bribery, whistleblower retaliation and an extramarital affair.

Pennsylvania Attorney General Josh Shapiro (D) said Texas’ attempt to invalidate the commonwealth’s election results through SCOTUS amounts to a “seditious abuse of the judicial process” that should never again be repeated. Shapiro and the commonwealth said that Trump campaign and its allies have “flooded” the courts with “frivolous” lawsuits for more than a month—all with the goal of undermining the legitimacy of Biden’s win.

Now that the litigation has failed, Shapiro said, Texas has “added its voice to the cacophony of bogus claims” to try and disenfranchise tens of millions of voters.

“Its request for this Court to exercise its original jurisdiction and then anoint Texas’s preferred candidate for President is legally indefensible and is an afront [sic] to principles of constitutional democracy,” Pennsylvania argued. “What Texas is doing in this proceeding is to ask this Court to reconsider a mass of baseless claims about problems with the election that have already been considered, and rejected, by this Court and other courts. It attempts to exploit this Court’s sparingly used original jurisdiction to relitigate those matters. But Texas obviously lacks standing to bring such claims, which, in any event, are barred by laches, and are moot, meritless, and dangerous.”

Pennsylvania said Texas is asking the Supreme Court to “disregard” the Constitution and countenance a “seditious abuse”:

Texas has not suffered harm simply because it dislikes the result of the election, and nothing in the text, history, or structure of the Constitution supports Texas’s view that it can dictate the manner in which four other states run their elections. Nor is that view grounded in any precedent from this Court. Texas does not seek to have the Court interpret the Constitution, so much as disregard it.

The cascading series of compounding defects in Texas’s filings is only underscored by the surreal alter- nate reality that those filings attempt to construct. That alternate reality includes an absurd statistical analysis positing that the probability of President-Elect Biden winning the election was “one in a quadrillion.” Bill of Complaint at 6. Texas’s effort to get this Court to pick the next President has no basis in law or fact. The Court should not abide this seditious abuse of the judicial process, and should send a clear and un-mistakable signal that such abuse must never be replicated.

Pennsylvania also said Texas’ “suggestion of a wide-ranging conspiracy” is nothing more than a “fantasy.”

The base of Texas’s claims rests on an assertion that Michigan has violated its own election laws. Not true. That claim has been rejected in the federal and state courts in Michigan, and just yesterday the Michigan Supreme Court rejected a last-ditch effort to request an audit. Not only is the complaint meritless here, but its jurisdictional flaws abound and provide solid ground to dispose of this action.

To begin, Texas has not alleged a sufficient case or controversy to support its standing to invoke this Court’s original jurisdiction. But even if Texas clears that hurdle, the Court’s prudential factors weigh against exercising jurisdiction. Texas does not have a cognizable interest in how Michigan runs its elections, and there plainly are alternative forums to raise these issues. Indeed, the lower courts have already found that similar claims lack legal and factual merit.

Wisconsin Attorney General Josh Kaul (D) said this lawsuit is “asking this Court to overturn the will of the people of Wisconsin—and the nation—based on meritless accusations of election fraud.”

“If this Court agrees to do so, it will not only irreparably harm its own legitimacy, but will lend fuel to a disinformation campaign aimed at undermining the legitimacy of our democracy,” Kaul argued.

Kaul also said that the Supreme Court’s mere decision to hear the case and give it the time of day would cause serious damage to the country:

Texas asserts that this Court’s intervention is necessary to ensure faith in the election. But it is hard to imagine what could possibly undermine faith in democracy more than this Court permitting one state to enlist the Court in its attempt to overturn the election results in other states. Merely hearing this case—regardless of the outcome—would generate confusion, lend legitimacy to claims judges across the country have found meritless, and amplify the uncertainty and distrust these false claims have generated.

Kaul said the court should not allow itself to be used by people who are “upset at the outcome of an election to undemocratically overturn it.”

Georgia Attorney General Christopher Carr, the lone Republican AG who had to respond, said Texas showed no respect for federalism by trying to get the federal judiciary to trump Georgia’s electoral powers:

Texas nevertheless asks this Court to transfer Georgia’s electoral powers to the federal judiciary. Respect for federalism and the constitutional design prohibits that transfer of power, but this Court should never even reach that issue because the Court’s rules governing its original jurisdiction, constitutional limitations on standing, and principles of federalism all preclude the exercise of this Court’s original jurisdiction over Texas’s belated action.