Trump Argued the Pandemic Was Winding Down in Order to Block Abortions. A Federal Judge Vehemently Disagreed.

A federal judge in Maryland dealt a blow to the Trump administration on Wednesday by refusing to reinstate a controversial rule that bars access to abortion drug RU-486 (mifepristone) by forcing women to visit a medical provider in order to obtain the pill.

U.S. District Judge Theodore Chuang suspended the U.S. Food and Drug Administration’s (FDA) “in-person requirements” rule–which held that mifepristone “must be dispensed in person after the patient has signed a Patient Agreement Form”–over the summer due to health concerns posed by the coronavirus (COVID-19) pandemic.

That prior ruling came in the form of an injunction for the American College of Obstetricians and Gynecologists plaintiffs. Chuang previously barred the rule from taking effect by finding it was “a serious burden to many abortion patients” and an “infringement on the right to an abortion [which] would constitute irreparable harm.”

Those plaintiffs originally sued to invalidate the FDA’s rule because such treatment of the drug runs counter to generalized FDA guidance seeking to limit in-person clinical visits amidst the pandemic.

As Law&Crime previously reported, the Trump administration filed an interlocutory appeal with the U.S. Supreme Court while also continuing to jockey for relief with the lower courts. To wit, the FDA appealed directly to Chief Justice John Roberts by requesting a stay of the district court’s order while the lawsuit makes its way through the court system–testing the resiliency and reflexive nature of the high court’s “shadow docket” which has been a typically reliable route for the Trump administration’s federal litigation efforts.

The Roberts Court, however, in an instance of independence, declined to play ball on the abortion pill rule. Instead, the justices held the administration’s application in abeyance–meaning that the request was temporarily suspended in order for the Maryland District Court to “promptly consider” the government’s request to “dissolve, modify, or stay the injunction, including on the ground that relevant circumstance shave changed.”

The Trump administration, in their bid to have the injunction rescinded, cited “changes to public health restrictions and guidance in their states during the COVID-19 pandemic” to argue that the threat had subsided enough for the government to force women into obtaining in-person consultations before they could access the drug.

The ruling sets out the thrust of their argument:

In the face of the compelling data and evidence that, across the United States, the COVID-19 pandemic is substantially worse than in July 2020, [the government defendants] argue that the health risk to women seeking a medication abortion is actually lower today based on certain specific developments, including the greater public health emphasis on the use of masks and the relaxation of public health restrictions imposed in the spring on the operation of certain businesses and institutions.

Judge Chuang considered the administration’s request–premised on those allegedly changed circumstances–in his Wednesday opinion and found it insufficient to change course.

“As of November 12, 2020, the daily number of new cases was increasing in 46 states,” the judge’s opinion notes. “In 49 states and the District of Columbia, the seven-day moving average number of new COVID-19 cases is higher now than when the preliminary injunction was issued in July 2020. The current data thus shows that infection rates are increasing dramatically as compared to July 2020.”

The court provided the following table to document the rate of increasing COVID-19 cases since the injunction was issued: 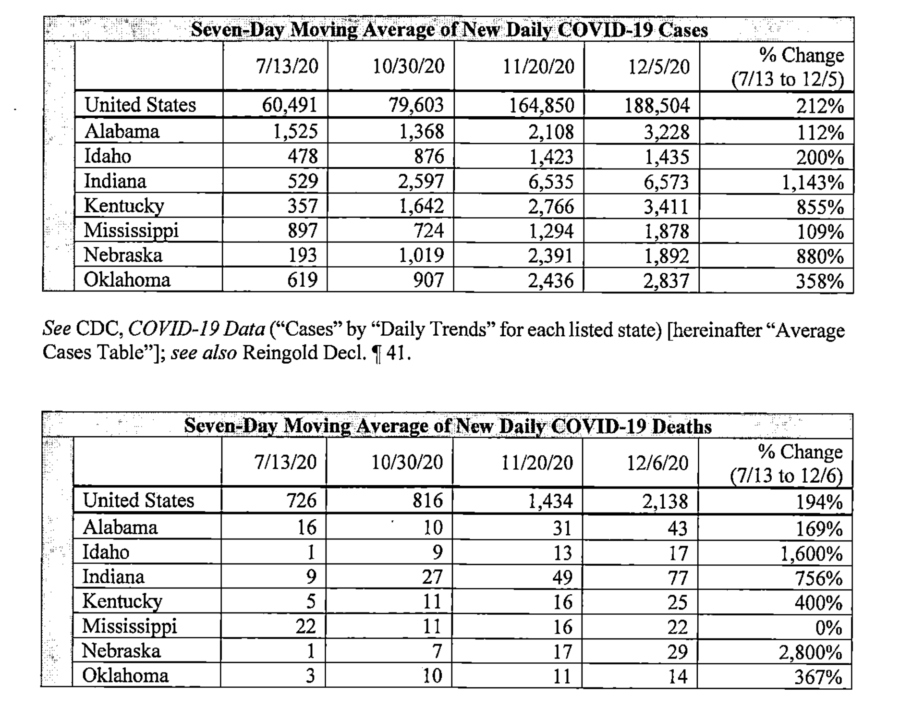 The numbers above tell essentially the entirety of the relevant legal discussion and story. In a word, the court was simply left wholly unconvinced.

“Based on the evidence presented, the Court finds no such changed circumstances because: (1) the COVID-19 pandemic continues to pose a significant health risk necessitating the preliminary injunction; and (2) as a result of that ongoing risk, the specific barriers underlying the undue burden determination have not been sufficiently ‘mitigated or resolved’ to alter the likelihood of success on the merits and to warrant a stay or dissolution,” the opinion notes.