Capitol Rioter Recorded Herself Saying ‘We Were Looking’ for Nancy Pelosi to ‘Shoot Her in the Friggin’ Brain’: DOJ 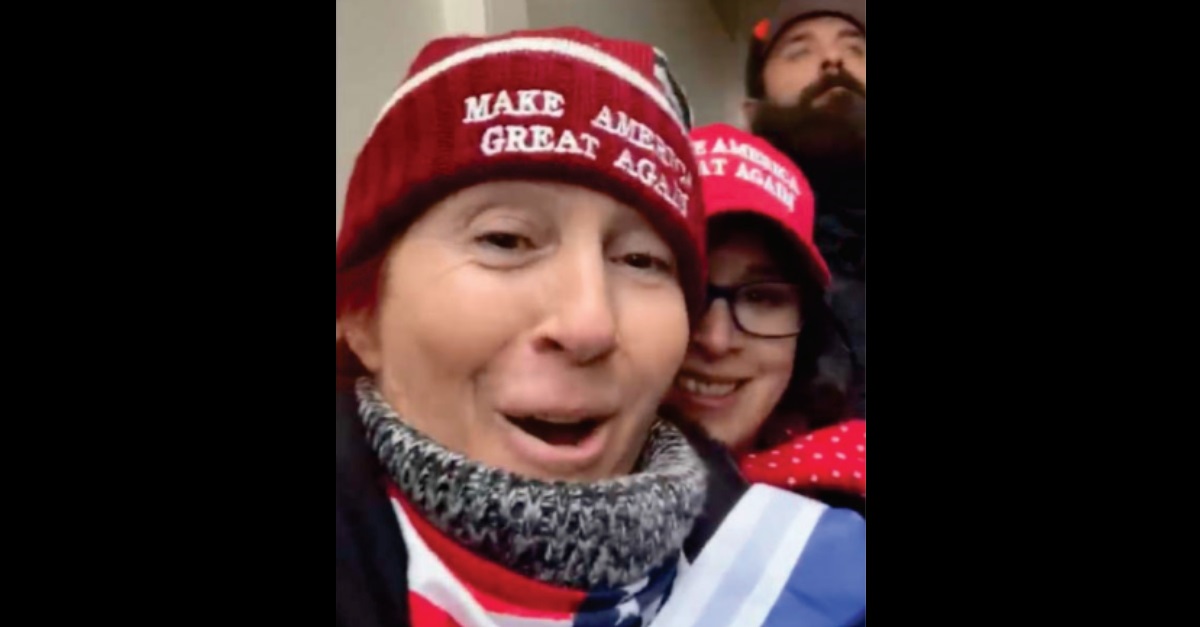 “We were looking for Nancy to shoot her in the friggin’ brain but we didn’t find her.”

Federal authorities are attributing those words to Dawn Bancroft, and they say she was talking about House Speaker Nancy Pelosi. Bancroft and Diana Santos-Smith are now facing charges over the Jan. 6 riot at the U.S. Capitol.

A recurring element in the D.C. insurrection is what rioters claim they would have done if they came face to face with certain politicians. House Speaker Nancy Pelosi is frequently mentioned as a target, viz. the number of people who went out of their way to gallivant in her office, allegedly steal one of her laptops, and run off with a broken piece of her name plate.

In an affidavit, authorities said they got a video allegedly filmed by Bancroft. From court documents:

The video was a “selfie” video which depicted BANCROFT and another woman, later identified as SANTOS-SMITH, in the process of attempting to exit the U.S. Capitol building in Washington, D.C. The video further captured a large mob of individuals who had become bottlenecked at a Capitol exit point. During the video, BANCROFT stated, “We broke into the Capitol…we got inside, we did our part.” BANCROFT continued, “We were looking for Nancy to shoot her in the friggin’ brain but we didn’t find her.” Your affiant believes that the “Nancy” BANCROFT was referencing is Speaker of the House, Nancy Pelosi. BANCROFT was wearing a red “Make America Great Again” ski-cap style hat, and SANTOS-SMITH wore a red “Make America Great Again” baseball hat during the video.

CCTV footage also depicted them attempting to enter at one point, authorities said.

Investigators alleged that Santos-Smith at first lied by saying she never stepped foot inside the Capitol Building. She changed her story after authorities confronted her with video. Both Santos-Smith and her co-defendant said they climbed into the building through a broken window but did not stay long: Santos-Smith’s account suggested a stay of 30 seconds to a minute; Bancroft said the pair was present for 2o to 30 seconds before deciding to leave.

Santos-Smith denied entering legislative chambers or offices. Bancroft discussed taking a video of her co-defendant inside the Capitol Building, saying she deleted it and told her kids to delete the copies she sent them, the FBI said. Her co-defendant had a similar story.

“SANTOS-SMITH stated she had initially deleted the footage she had taken from inside the Capitol to prevent law enforcement from discovering it, but was able to recover the footage,” the affidavit stated.

Documented supporters of then-President Donald Trump raided the Capitol Building following an incendiary speech in which Trump said everyone should march to the Capitol (he didn’t show up). Five people died in the chaos: four Trump supporters, and one Capitol police officer. Another Capitol officer, a D.C. Metro officer, and an insurrection defendant all died by suicide in the ensuing days.

It is unclear if they have attorneys in this matter.