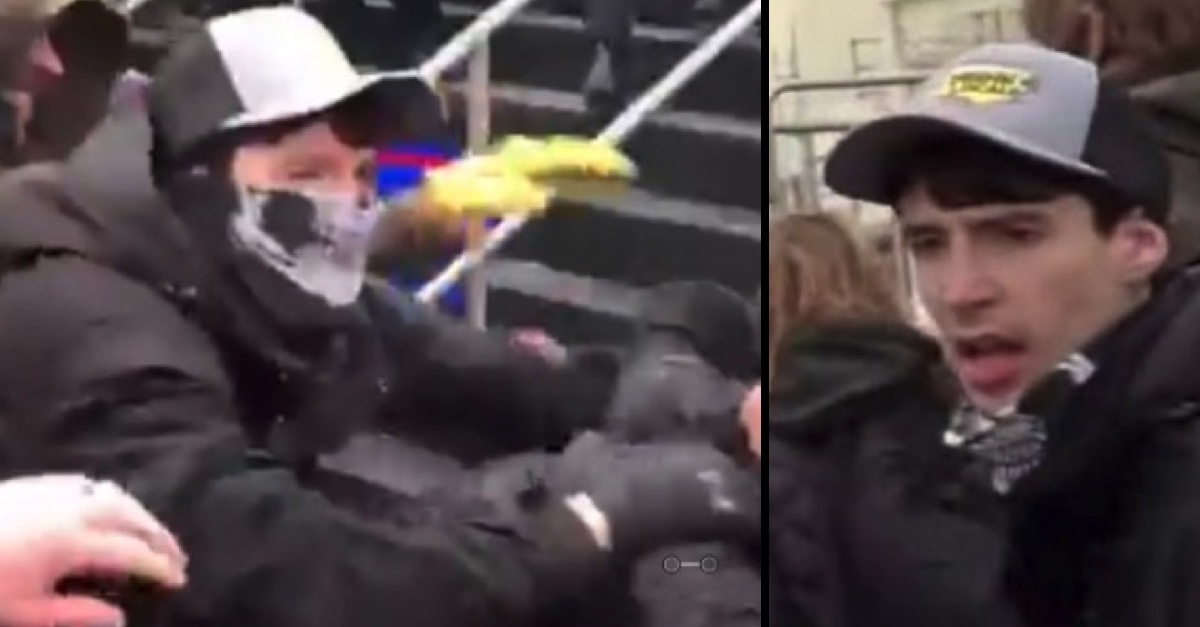 A federal judge has ordered a North Carolina man charged with being among the first to assault police at the U.S. Capitol on Jan. 6 back to jail after he was found allegedly driving while intoxicated with a cache of ammunition and an AR-15 in his car.

James Tate Grant, 29, was arrested in October and charged with storming the Capitol as hundreds of Donald Trump supporters overran police and breached the building in an effort to stop the certification of Joe Biden‘s win in the 2020 presidential election. He was arrested again in December when police in North Carolina found him apparently intoxicated behind the wheel of a car containing a rifle and at least 60 rounds on hand.  According to court papers:

“[A]t approximately 5:00 a.m., an officer from the Garner Police Department responded to a restaurant in response to a suicide threat. While pulling into the parking lot, the officer observed the Defendant pulling out in a silver car. The Defendant put his hands out of the window and attempted to get the officer’s attention. The officer approached the Defendant, who stated, ‘They probably called on me,’ and further explained his involvement in the “January 6th incident.” Because the Defendant appeared intoxicated, the officer initiated a DWI investigation. While being placed under arrest, Grant attempted to flee. He then dropped to the ground and stated something to the effect of ‘Just kill me now.’ He then stated, ‘It’s over.'”

According to the conditions of his pretrial release, Grant was not allowed to violate any state or federal laws. He also couldn’t possess a firearm and had to submit to regular drug testing.

In addition to the DWI charge, Grant tested positive for amphetamines in October and November, according to the pretrial violation report.

In asking for Grant to be sent back to jail for these violations, the government said that it was clear that Grant could not be trusted to follow the conditions of his pretrial release.

“He committed a crime by driving while intoxicated,” prosecutors said in a motion requesting Grant’s bond be revoked. “He initially tried to flee from law enforcement. He used prohibited substances.”

“Grant’s statements are of such a concerning nature that there is reason to believe he is a danger not only to the community, but also to himself,” the government said in its motion. “The Defendant had an opportunity to respect the Government and Court’s trust in his release pending trial, but has apparently made the conscious decision to abuse that privilege.”

“Both the alleged facts of the case and this new arrest, and Mr. Grant’s positive tests for amphetamines, present me with what I think is a toxic combination of substance abuse problems, potential mental health problems, [and] repeated access to firearms that pose a very serious threat to the community,” Kelly said, adding that Grant’s actions “strongly suggest that Mr. Grant is unwilling or unable to abide by his conditions of release.”

Kelly also noted Grant’s criminal history, including a September incident in which Grant was charged with driving while impaired and carrying a concealed gun.

“It’s not one occasion, it’s two, and that to me is just really overwhelming,” Kelly said.

Grant was also convicted in 2018 for tampering with a vehicle, for which he was sentenced to 30 days in jail and a year of probation.

During Tuesday’s hearing, Grant’s attorney, Peter Cooper, said that Grant had the weapon and ammunition in his car in December because he was looking to “dispose” of them so that he could comply with the his conditions of pretrial release.

“I weighed that, but candidly I didn’t find it terribly credible, considering the amount of ammunition he had with him,” Kelly told Cooper. “There would have been scores of ways to have, for example, his father dispose of that weapon, store it, do anything with it but get drunk and ride around in a car with it.”

“He may well have had an intent to do that, but that was not an intent that was being realized on the day he was arrested,” Kelly added.

Prosecutors say Grant was “among those who used violence to set off a chain of events that involved thousands of rioters invading the U.S. Capitol, injuries, deaths, property damage, havoc, and the delay of the certification of a presidential election.”

He is one of five co-defendants accused of “violently picking up and pushing a metal barricade at United States Capitol Police Officers, who were manning the barricade[.]” Two officers were injured in that incident, which took place at part of the Capitol known as the Peace Circle.

Prosecutors also all that Grant entered the Capitol building through a broken window and, once inside, entered at least two private Senate offices.

Prosecutors recently revealed that Grant, Ryan Samsel, Paul Johnson, and Stephen Randolph would be joined in a single action under a superseding indictment. That indictment, which was filed under seal, also named a fifth co-defendant whose identity has not been revealed.