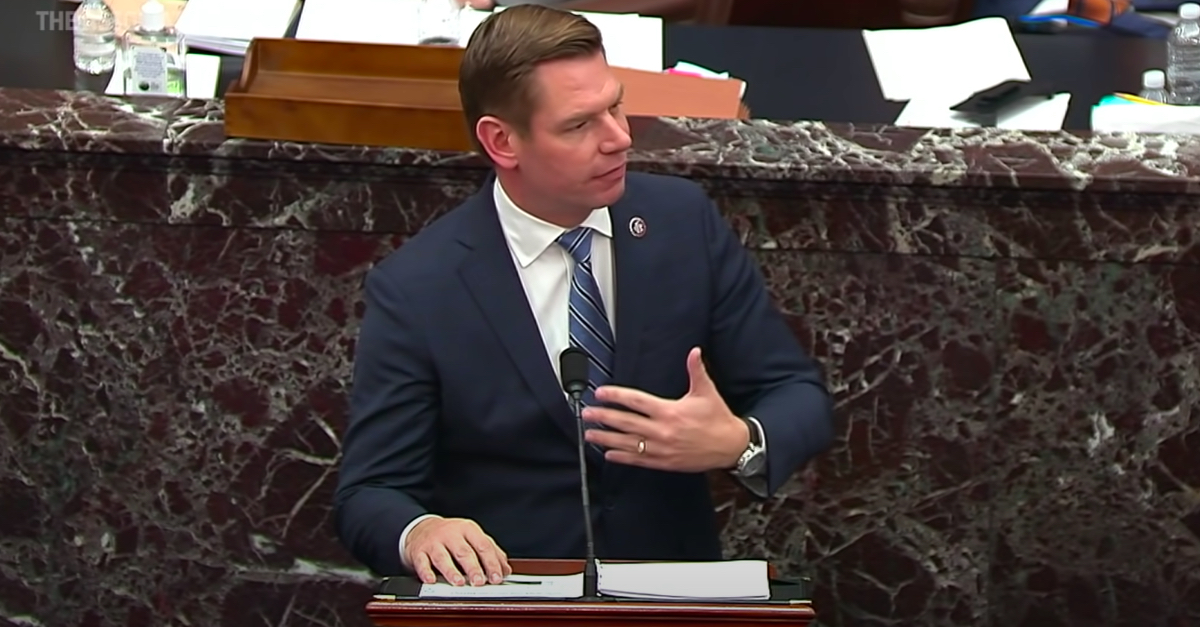 One of the House impeachment managers has filed a lawsuit against former President Donald Trump and several Trump allies who spoke at the Jan. 6 “Stop the Steal” rally that immediately preceded the assault on the U.S. Capitol and temporarily derailed the official proceedings for counting the Electoral College votes.

Rep. Eric Swalwell, a Democrat from California, filed the complaint on Friday against Trump, Donald Trump Jr., Rudy Giuliani, and Rep. Mo Brooks in the U.S. District Court for the District of Columbia, alleging defendants were responsible for inciting a riot.

“The horrific events of January 6 were a direct and foreseeable consequence of the Defendants’ unlawful actions,” the complaint stated. “The Defendants, in short, convinced the mob that something was occurring that— if actually true—might indeed justify violence to some, and then sent that mob to the Capitol with violence-laced calls for immediate action.”

Trump, who was impeached and later acquitted on the charge that he incited the Capitol riots, told the crowd of rallygoers on Jan. 6., “We will never give up. We will never concede. It will never happen. You don’t concede when there’s death involved. Our country has had enough. We will not take it anymore.”

During his near hour-long speech, the former president also directed the attendees to march to the Capitol to “give our Republicans the kind of pride and boldness that they need to take back our country.”

Giuliani infamously called for “trial by combat” during his speech, which he later claimed was merely a reference to Game of Thrones.

The 65-page lawsuit from Swalwell alleges a conspiracy to violate civil rights, violations of the D.C. Anti-Terrorism Act, and intentional infliction of emotional distress. It is distinct from the lawsuit filed last month by Democratic Rep. Bennie Thompson.

Swalwell claims that Trump and his associates made “public statements knowingly designed to undermine public confidence in the election” both before and after the November election in an effort to prevent Joe Biden from taking office.

“Such statements included falsely claiming that the election had been ‘rigged’ and that fraudulent voting had been widespread enough to affect the outcome. These statements were intended to have the effect, and did have the effect, of communicating strategies for accomplishing the aims of the Defendants’ illegal conspiracy to other members of the conspiracy, including the persons who took violent action on January 6, 2021,” the Swalwell suit stated. “[T]he Defendants, by force, intimidation, or threat, agreed and conspired among themselves and with others to prevent members of Congress, including the Plaintiff, and Vice President Mike Pence from counting the Electoral College Votes and certifying President [Joe]Biden and Vice President [Kamala] Harris as the winners of the 2020 presidential election.”

The suit seeks actual and punitive damages against Trump and a declaration from a federal judge that the defendants violated the aforementioned civil rights and anti-terrorism laws.

Swalwell also wants a judge to order Trump et al. to provide written notice at least one week before holding any future events in D.C. when “significant election or election certification activity is taking place”—”to allow the Plaintiff to determine whether to seek relief from the Court to prevent further violence or disruption to the proper functioning of the federal government.”

Law&Crime emailed Swalwell’s office regarding the lawsuit but did not receive a response at the time of publishing.

Today, I filed a civil claim against Donald Trump, Donald Trump Jr., Rudolph Giuliani, and Rep. Mo Brooks for inciting an attack against the Capitol that terrorized lawmakers and prevented us from certifying the votes of the American people.