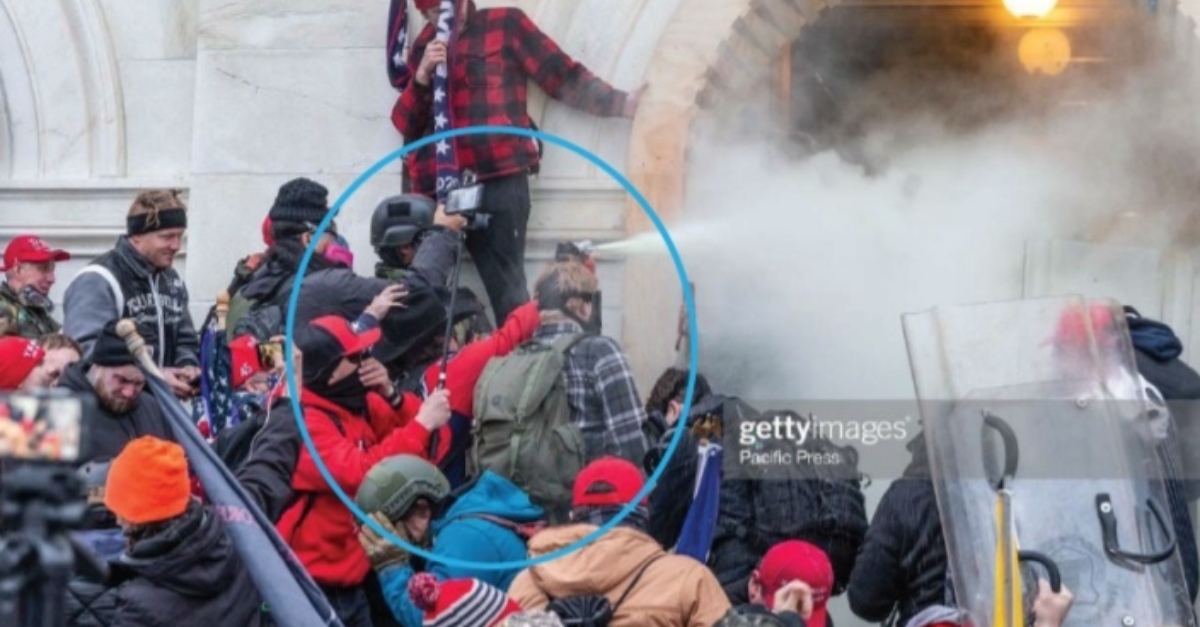 An attorney for a Maryland man charged in the D.C. insurrection argues his client was just following the orders of former President Donald Trump to march to the Capitol Building.

Lawyer A. Eduardo Balarezo asserted that his client Matthew Ryan Miller, 22, should be released pending trial. This continues a pattern among some defendants, who attributed their behavior on Jan. 6 to a speech the ex-POTUS gave at the Ellipse. Trump supporters raided the Capitol Building after the then-president continued to lie that he actually won the 2020 presidential election, saying that it was being stolen from him.

“We’re going to walk down to the Capitol, and we’re going to cheer on our brave senators and congressmen and women, and we’re probably not going to be cheering so much for some of them, because you’ll never take back our country with weakness,” he said during the Ellipse rally before the deadly chaos erupted. “You have to show strength, and you have to be strong.”

It just so happens that today, Monday, is the eve of Trump’s impeachment trial—where House Democrats will argue that Trump, with his words at the rally, incited his supporters to commit an insurrection.

Rioters postponed but did not prevent Congress from counting Electoral College votes weighing in favor of winner Joe Biden. Five people died amid the chaos, however: four Trump supporters, and one Capitol officer. Another Capitol officer, a D.C. Metro officer, and a defendant died by suicide days in the days that followed.

The Federal Bureau of Investigation cited images to show that Miller used a barricade to scale walls at the Capitol plaza, and helped others do the same. He was identified as an individual spraying a fire extinguisher while on the Capitol steps, where rioters and police clashed.

Balarezo reasoned that’s not enough to keep his client behind bars ahead of trial. There’s no evidence Miller–who has no criminal history, and immediately got a job offer after losing employment over the current case–entered the building, he wrote. There’s also no proof he engaged in “physical violence,” besides the allegation about discharging the fire extinguisher, the attorney wrote. He asserted his client did not intend to disrupt Congress or damage the Capitol grounds or building.

From the Sunday filing obtained by Law&Crime:

With the exception of the tenuous charge of assaulting a police officer, Mr. Miller has been charged with offenses against property – the United States Capitol and its grounds. Mr. Miller concedes he was on the Capitol grounds to protest along with thousands of other protesters and was merely following the directions of then-President Trump, the country’s chief law enforcement officer, and other speakers to march to the Capitol. Considering the size of the crowd present, he had no knowledge that the Capital grounds were restricted or that he was not otherwise allowed to be there. Besides the allegation that he discharged a fire extinguisher, there is no evidence that he engaged in physical violence or entered the Capitol building itself, where the certification of the Electoral College votes was taking place. With respect to the allegation that Mr. Miller discharged a fire extinguisher, the Detention Order states that he “deployed a fire extinguisher in the direction of law enforcement.” Id. Again, there is no evidence that, if he did discharge the fire extinguisher, he actually made contact with or caused fear or harm to any law enforcement officer. This factor weighs in favor of release.

“In a momentary lapse in judgment, a young and impressionable Mr. Miller got caught up in the moment and acted against his better instincts,” the attorney wrote.

This filing follows in the footsteps of some defendants who have said they were just doing what Trump wanted.

Attorney Al Watkins has made the same argument about his client, the so-called “QAnon Shaman” Jacob Anthony Chansley.

Such a defense may carry some water, at least if the charges in question are comparatively minor. From an op-ed by Joel Cohen, a white collar criminal defense lawyer, and an adjunct professor at both Fordham and Cardozo Law Schools:

Now, technically, “my president commanded me” constitutes no legal defense at all in a criminal courtroom. “Just following orders” didn’t work for the Nazis at Nuremberg, it didn’t work for William Calley of My Lai fame and it won’t work now especially since, unlike Hitler’s inner cadre, Trump didn’t actually order anyone.

It might, however, advantage a defendant as long as his conduct at the Capitol didn’t involve violence or serious incitement. So assume his criminal conduct, even if extremely troubling, was primarily a trespass. Or even a form of larceny, with no intent to forward congressional papers to a state enemy. In those circumstances telling a judge, with sincere remorsefulness, that he was blinded by his loyalty to a sitting president who somehow misled him–actually misled him—to believe that his election was stolen, might indeed go a long way.

Miller has been hit with several charges, including: obstruction of a judicial proceeding; assault on a police officer; entering or remaining in any restricted building or grounds without lawful authority, with a dangerous weapon; and act of physical violence in the Capitol grounds or buildings.