Man Who Tased Michael Fanone May Blame Trump at Trial 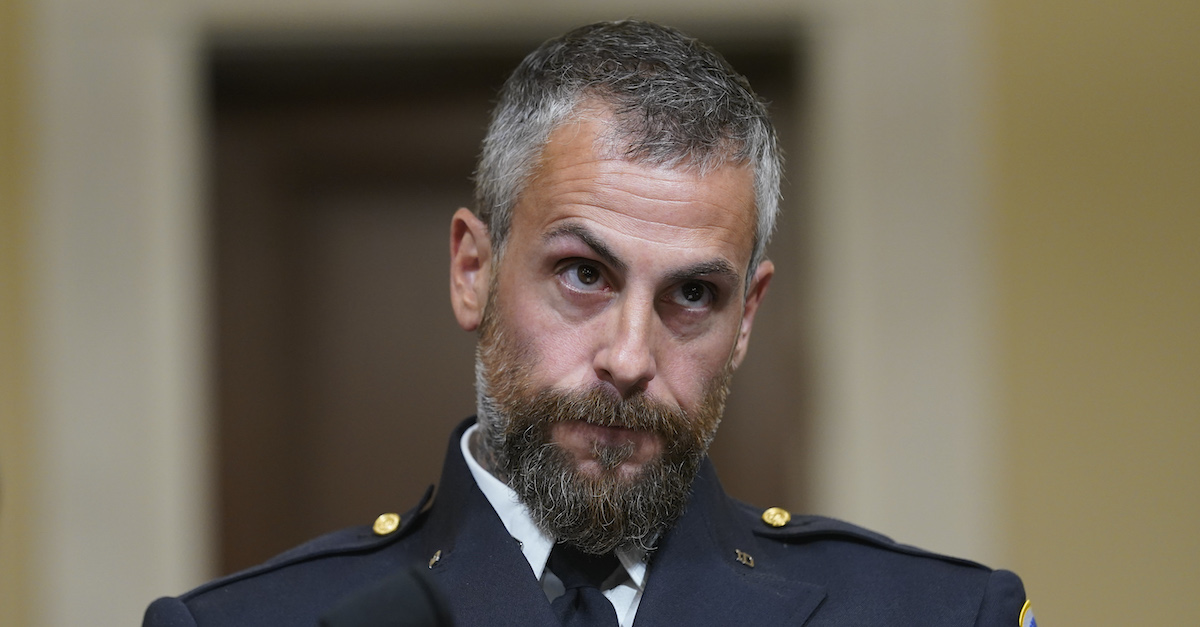 A defendant who admitted tasing Washington, D.C. Metropolitan Police Officer Michael Fanone during the Jan. 6 breach of the U.S. Capitol Complex has filed court papers that indicate he may seek to blame former president Donald Trump for what occurred. The documents also contain a 195-page transcript of an FBI interview where the defendant, who said he was a former Trump campaign volunteer, told agents he became radicalized by listening to InfoWars host Alex Jones.

Daniel Rodriguez is one of several defendants accused in the attack on Fanone. Rodriguez provided notice that he “may” assert a defense of “public authority.” That notice is a precursor to a possible argument at trial that he was acting “on behalf of” a “law enforcement agency or federal intelligence agency” when he stormed the Capitol and admittedly attacked Fanone. Thus, the documents tee up a possible defense but do not directly employ it.

Under federal procedural rules, Rodriguez’s notice was required to contain the following information:

(A) the law enforcement agency or federal intelligence agency involved;

(B) the agency member on whose behalf the defendant claims to have acted; and

(C) the time during which the defendant claims to have acted with public authority.

(A) “The Executive Branch,”

(B) “Former President Donald Trump,” and

The defense lawyers also launched into a brief bit of advocacy involving the relevant law.

“[I]t offends due process to convict an individual who was acting upon authorization of a government official,” Rodriguez’s counsel argued while addressing the relevant rule of criminal procedure at play (Rule 12.3, for those keeping track) and attempting to simultaneously link Trump to the siege. They then briefly cited the relevant case law:

In United States v. Barker, defendants were recruited to participate in a national security operation led by a White House official, whom the defendants had previously known as a CIA agent. Barker, 546 F.2d at 949. In reversing the defendants’ convictions, the appellate court carved out an exception to the mistake of law rule that would allow exoneration of a defendant who relied on authority. Id. at 947-49.

The defense noted that it was unclear in the Washington, D.C. Circuit how the “public authority” defense tactic may play out. The defense said it wished to at least assert the possible strategy “out of an abundance of caution” at this stage in the proceedings just in case they chose to pursue it.

A 195-page transcript of law enforcement interviews with Rodriguez indicates that the defendant confessed to tasing Fanone. His attorneys want the admission thrown out of court.

“I just came up to the steps again, and I saw them pulling him out, and I tased him,” Rodriguez said of the tug-of-war that left the D.C. officer (who, mind you, voted for Trump himself) fearing for his life.

Fanone was “dragged down the Capitol’s marble stairs, beaten with pipes and poles, tear-gassed and stun-gunned,” Time reported. He pleaded for his life when the crowd “threatened to shoot him with his own gun, telling the rioters he had kids.”

The officer suffered a mild heart attack allegedly triggered by Rodriguez’s stun gun, the Washington Post reported. He was knocked unconscious but survived to testify before Congress.

The transcripts reveal how the FBI pressed Rodriguez about what happened:

Q. How many times did you tase him?

Q. Because the video shows it twice.

A. No. No. The video — if the video shows it twice, it’s a replay or something.

The defendant eventually called his own critical thinking skills into question when pressed further:

Q. The disparity is in between your story and what happened to Officer Fanone and what’s on video. I can show you the video of you tasering him twice.

A. It was not twice.

Q. I’ll show it to you in just a minute.

Q. I will. But the disparity between what you’re saying happened, describing, oh, I’m such a benevolent man coming up to a poor officer who’s struggling to keep — to survive, thinking he’s going to die. Let me help him out. Let me taser him. Is that really the story you want to be written about you? Is that in all of my benevolence, I decided I was going to taser this man who is struggling for his life in that moment and thinking he’s going to die. Four daughters.

Q. Then, tell us what happened. Don’t leave the story be this crappy story that you’re telling us right now, that you were just there to help him and taser him.

Q. Think about your mom.

Elsewhere, Rodriguez suggested that listening to InfoWars helped push him over the edge:

Q: What happened in your life? Like, how did you start going to these rallies?

He expounded later in a veritable monologue:

And I was growing weed with them and I was like, yeah, this is cool. They all got low riders and this and that, and I was like, oh, this is that lifestyle that’s for me. But it wasn’t. I didn’t fit in. I’m a good person trying to — and I wanted to be a bad person, and it just didn’t work for me. And I kept getting robbed and they kept taking from me.

Rodriguez elsewhere said he campaigned for Trump in the Whittier, Calif. area by manning telephones and going door to door.

Read the relevant documents below: