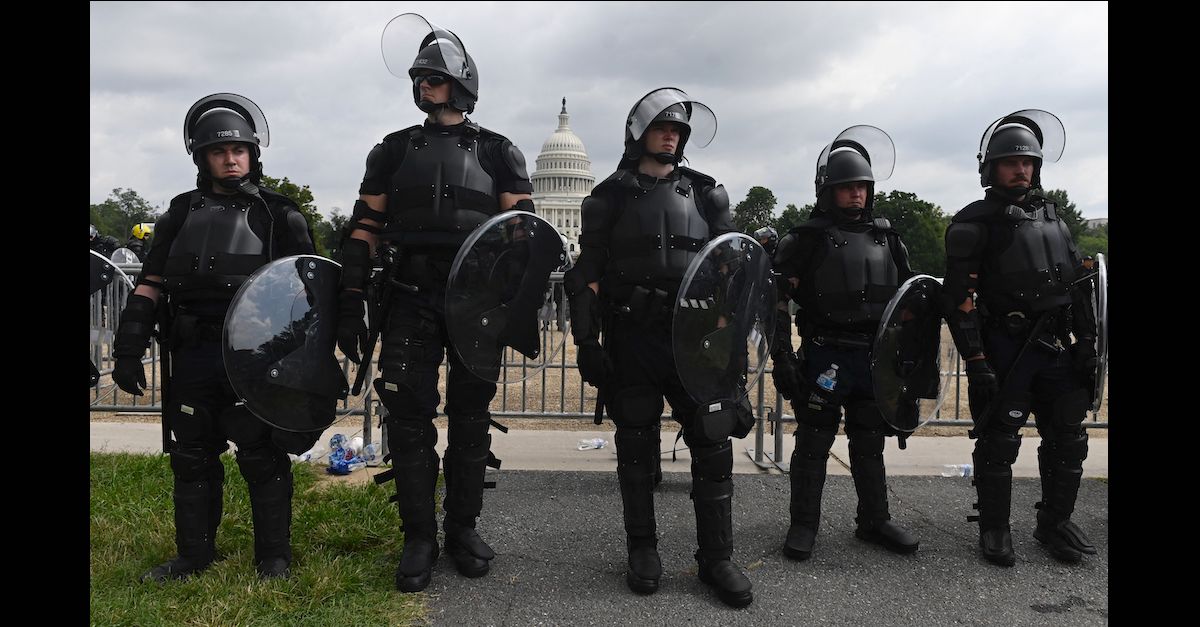 Police stand guard as demonstrators gather for the “Justice for J6” rally in Washington, D.C., on September 18, 2021.  (Photo by ANDREW CABALLERO-REYNOLDS/AFP via Getty Images.)

The U.S. Capitol Police on Saturday announced several arrests surrounding a protest over the treatment of various individuals connected to the Jan. 6th siege on the U.S. Capitol Complex more than eight months ago.

One of the arrestees was a man who “appeared to” have brought a “handgun” into the crowds at the demonstration.  Multiple news organizations said the rally occurred under the eye of a massive police presence — and that it was mostly peaceful.

“At 1:30 pm, someone spotted what appeared to be a handgun on a man in the crowd,” The Capitol Police said on Twitter. “The witness told USCP officers, who detained the suspect. At this time, it is not clear why the man was at the demonstration. Officers charged him with 40 U.S. Code § 5104 – Unlawful activities.”

At 1:30 pm, someone spotted what appeared to be a handgun on a man in the crowd. The witness told USCP officers, who detained the suspect. At this time, it is not clear why the man was at the demonstration. Officers charged him with 40 U.S. Code § 5104 – Unlawful activities.

“The man did have a gun,” the Capitol Police subsequently tweeted.

The man did have a gun.

The Capitol Police also tweeted during the mid-afternoon hours that their arrest count was four in total.

The USCP also stopped a vehicle along Louisiana Ave. this morning and subsequently arrested two people for felony extraditable warrants out of Texas. One was for Possession of a Firearm. The other was for a probation violation.

So far, the USCP is reporting a total of 4 arrests.

At approximately 12:40 pm, USCP officers arrested a man, who had a knife, for a weapons violation.

Protesters and counter-protesters were present around the capitol on Saturday, according to the police and various news reports. But the authorities said they were mostly able to keep the ideologically opposed groups from clashing.

Approximately 400 to 450 people were inside the protest area today (excluding law enforcement).

Security around the capitol complex and around the U.S. Supreme Court was tight leading up to, during, and after the planned events.

Here are a few more pictures of the 7:15am swearing-in with our local, state and federal law enforcement partners. pic.twitter.com/8biG2D2dmb

Police with shields, helmets & other riot gear just steps away from the Justice for J6 rally a few minutes after it ended. pic.twitter.com/wC7XWVmfj0

Heavy police presence following the end of the Justice for J6 rally. pic.twitter.com/LVXvDNqHMl

The precise identities of the arrestees was not immediately available.

Washington Times reporter Emily Zantow captured video she described as showing the police “surround[ing] a man and escort[ing] him away” from the rally. It is unclear from the context of the video why the man was being detained or if he was one of the four individuals referenced by the Capitol Police as being placed under official arrest.

Police surround a man & escort him away from the Justice for J6 rally site. pic.twitter.com/zVNMW6qCYg

WRC-TV also captured video which showed the police appearing to separate a man with a megaphone from others in his vicinity.  The authorities deftly deflated the situation and at one point quickly positioned their bicycles to protect the man from being swarmed.  The man’s identity was also unclear.  It did not appear he was being arrested or charged.

Reuters captured video of a similar police tactic which appeared to have been deployed to protect a counter-protester.

News photographers captured other images of the police holding back counter-protesters and allowing the core demonstration to continue.

The Washington Post reported that the right-wing advocates, candidates, and protesters who came to take part in the demonstration were “dwarfed by hundreds of police officers and news reporters” present to observe and record the event. The Post added that the protest “unfolded with relative peace and quiet” from the perspective of its staffers on the ground.

“The afternoon settled into a predictable cycle, as reporters swarmed to minor altercations or police inquiries that quickly evaporated,” the Post noted.

One of the protesters present on Saturday, Eugene Sibick of Upstate New York, told the Post that his son Thomas Sibick remained jailed over the original Jan. 6th events.  He said his son’s detention was “a disgrace to this country” and complained about the food his son was being provided in jail.

“There were things that happened last summer in Seattle and Portland that were more egregious than what happened here, and those people were let out,” the detained man’s father told the Post.

As Law&Crime has previously reported, Thomas Sibick is one of three men charged with attacking a U.S. Capitol Police officer on Jan. 6th.