Beverly Hills Beautician Who Yelled ‘You Are Not Going to Take Away Our Trumpy Bear’ on Jan. 6 Is Now Cooperating with Feds 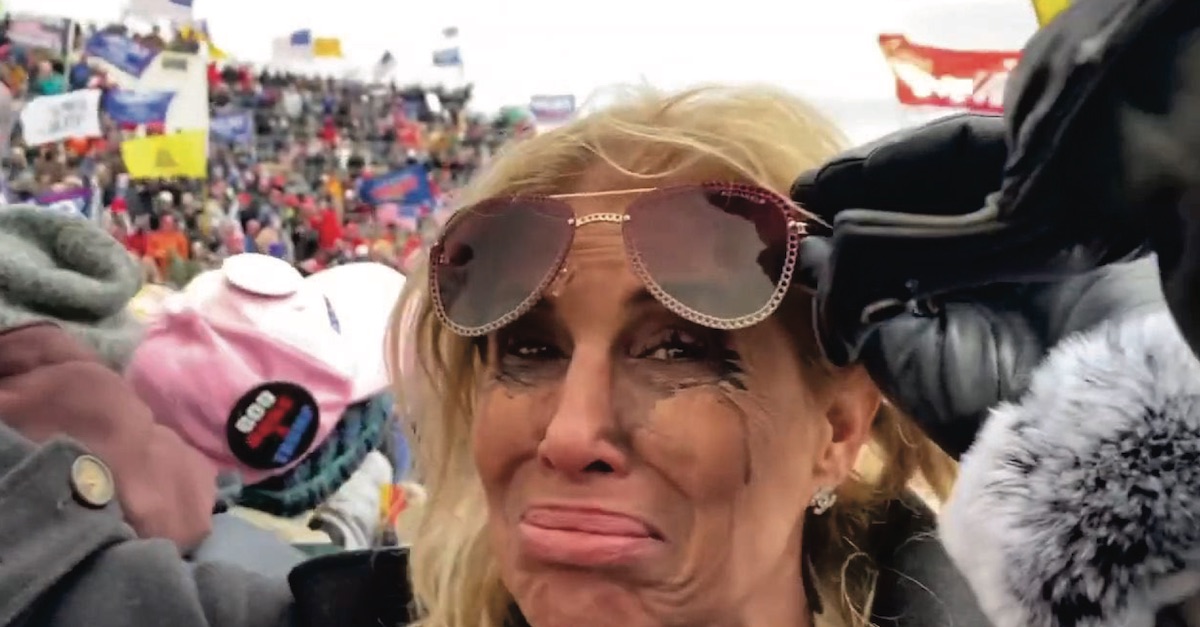 The Beverly Hills beautician with with a bullhorn who helped rioters breach the Capitol building on Jan. 6 by smashing a window, and then climbed through the window herself, is cooperating with the FBI after pleading guilty to multiple criminal charges.

Gina Bisignano, the owner of an eyelash extension and skincare salon, has pleaded guilty to six of the seven charges against her, according to a plea deal filed in August and unsealed last week. She has admitted to charges of obstruction of official proceedings, civil disorder, disorderly conduct, entering and remaining in a restricted building or grounds, and physical violence in a restricted building or grounds.

Bisignano was part of the mob of Donald Trump supporters that violently rushed the building from a tunnel on the Lower West Terrace in an attempt to stop the counting of Electoral College votes and blocking of the certification of Joe Biden’s win in the 2020 presidential election.

Under the plea agreement, Bisignano “shall cooperate fully, truthfully, completely and forthrightly” with federal, state, and local investigations into Jan. 6. This may include answering questions, providing sworn written statements, taking polygraph tests, and “participating in covert law enforcement activities.”

Bisignano also agreed to turn over any evidence of “any and all evidence of crimes” of which she is aware, along with any “contraband and proceeds of such crimes.” She also agreed to be interviewed by law enforcement agents without an attorney present, although if she asks for a lawyer she can have one, and will provide grand jury testimony if the government asks for it.

Bisignano did not plead guilty to a charge of destruction of government property. That charge will presumably be dropped when she is sentenced.

According to the government’s statement of offense, which outlines the facts supporting Bisignano’s guilty plea, Bisignano was “hit with a direct shot of chemical irritants deployed by the retreating officers.” However, she was undeterred: “As the mob swelled inside the tunnel, and officers were being assaulted, Bisignano climbed on a ledge inside the tunnel, and waved other rioters into the tunnel to assist in the effort to break into the U.S. Capitol building,” the document says.

The statement of offense also says that once Bisignano and other rioters were cleared from the tunnel, she searched for—and found—a different way in.

“After her removal from the tunnel, Bisignano spoke with other rioters on the Lower West Terrace about ‘what Pence’s done’ and how to gain entry to the U.S. Capitol building. Bisignano and others were standing in front of a semi-circular window when Bisignano started shouting ‘break the window! Break the window!’ Then, another rioter on the ledge of the windowsill took out a small hatchet-style took and started to hammer away at the glass of the window, while Bisignano said ‘do it, do it!’ Bisignano herself subsequently climbed on to the ledge of the same windowsill. Bisignano then assisted a second rioter on to the ledge, who immediately began to bang on the glass with a large object. That rioter was pulled off the windowsill, but Bisignano remained. Several minutes later, Bisignano assisted a third rioter up on to the windowsill, and that rioter used a fire extinguisher to smash the glass of the window. According to the Office of the Architect of the Capitol, the cost to repair the damaged window was approximately $1500.”

She also used a bullhorn to encourage the rioters, shouting from the windowsill:

Bisignano pleaded guilty in August to six of the seven charges against her, but the plea was filed under seal. U.S. District Judge Carl Nichols, a Trump appointee, ordered the plea to be unsealed in a status conference on Jan. 21, after the government filed a motion to unseal. Bisignano’s attorney Charles Peruto said in the hearing that they did not oppose the unsealing of the plea agreement.

The most serious of the charges is the obstruction charge, which carries a technical potential sentence of 20 years in prison and $250,000 fine. Any sentence would more than likely be significantly lesser in severity. This particular charge has been a source of controversy in other Jan. 6 cases, as defendants have argued that the Electoral College certification is not an “official proceeding” for purposes of the statute, and that a corruption charge under statute is unconstitutionally vague.

U.S. District Judge Dabney Friedrich, a Trump appointee, recently rejected most of these arguments, finding that the Electoral College certification is an official proceeding, and that the determination whether one was “corruptly” trying to stop the proceedings depends on the facts of each case.

Bisignano did not plead guilty to a charge of destruction of government property, which could have carried a prison sentence of up to 10 years, if the damage was worth more than $1,000.

The language of the plea agreement suggests that Bisignano may still believe that Trump won the 2020 presidential election due to voter fraud, despite this conspiracy theory being repeatedly debunked.

Although Bisignano has apparently been cooperating with the government since at least August, she has not always been cooperative with court orders, as Nichols noted in a Dec. 14 minute order after Bisignano failed to appear.

“In light of Defense Counsel’s tardiness and the Defendant’s nonappearance in the Status Conference held earlier today on December 14, 2021 at 10:00am, it is ORDERED that the Status Conference is rescheduled for December 21, 2021 at 1:00pm,” Nichols wrote in a minute order. “This is not the first time timely attendance has been a problem in this case. Defense Counsel and Defendant are admonished that additional failures to appear timely will be looked upon even more unfavorably.”

Bisignano is far from the first Jan. 6 defendant to strike a plea deal that involves cooperating with federal authorities. Multiple members of the extremist “Oath Keepers” militia group pleaded guilty in July and agreed to cooperate with investigators, and a member of the far-right “Proud Boys” has also agreed to cooperate as part of a plea deal, perhaps even against other members of the group, according to a New York Times report.

Bisignano’s next status conference is set for March 4, 2022.

Read the plea agreement, below.