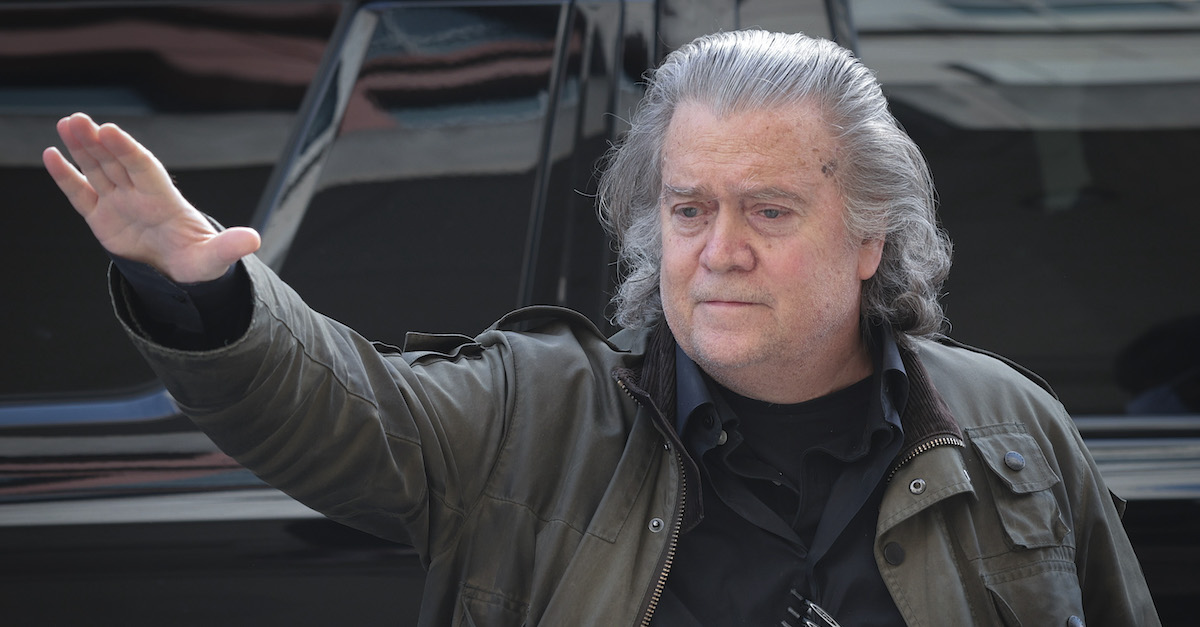 Former senior advisor to U.S. President Donald Trump Steve Bannon arrives at U.S. District Court for an appearance on March 16, 2022 in Washington, DC. Bannon has been charged with two counts of contempt of Congress after refusing to comply with a subpoena from the House Select Committee investigating the January 6 attack on the U.S. Capitol.

Federal prosecutors on Friday asked a judge not to dismiss a contempt of Congress case against Steve Bannon, a former senior adviser to then-President Donald Trump.  The case is connected to a subpoena issued by the Select Committee to Investigate the January 6th Attack on the United States Capitol.

In essence, Bannon is charged with refusing to both (1) hand over documents (or, in lieu of the documents themselves, a log which asserts privilege over certain documents in his possession) and (2) appear for a deposition before the Jan. 6th Committee.

Bannon moved on April 15 to dismiss the indictment against him.  That 62-page filing launched a four-pronged attack on the case.

Bannon argued further that the Jan. 6th Committee’s decision to refer his refusal to sit, talk, and provide documents to the U.S. Department of Justice violated notions of due process; that the statute used to prosecute him (2 U.S.C. § 192) is unconstitutional as applied to him; and that “prosecutorial over-reaching requires dismissal” of the matter — including because, per Bannon, the feds misled the grand jury that indicted him.

Federal prosecutors on Friday rubbished those arguments via a competing 48-page opposition motion.  It argues that Bannon was being subpoenaed “as a private party in 2020-21” and “not in his capacity as a White House advisor in 2017.”

“The Defendant contends that the Indictment should be dismissed,” the federal prosecutors noted.  “His principal grievance is that his total noncompliance with the subpoena is excused by executive privilege and prior Department of Justice writings and opinions. Not so.”

Arguing that Bannon was “ignor[ing] the straightforward facts of this case,” the DOJ said “that neither the current nor former President asserted executive privilege in a manner consistent with or allowing the Defendant to engage in total noncompliance.”

Rather, the DOJ, citing its own “writings and opinions” from the past, cast Bannon as merely “a private party subpoenaed to testify and provide documents to Congress about events that occurred long after he left the government.”

The Defendant’s remaining challenges to the Indictment—that 2 U.S.C. § 192 is unconstitutional as-applied, that the Committee exceeded its authority in issuing the subpoena, and that the prosecution team committed misconduct—are also meritless. The courts have applied Section 192 to contemnors for over 100 years without difficulty; the Defendant waived procedural objections to the subpoena by failing to raise them with the Select Committee, which acted well within its legislative authority; and the prosecution did not commit misconduct or otherwise overreach in investigating and prosecuting the Defendant’s default. The Defendant’s motion to dismiss should be denied.

“The Defendant is a private citizen who, for about seven months in 2017, worked in the White House as an advisor to former President Donald J. Trump,” the DOJ said while pointing to Bannon’s brief actual tenure in government.

The DOJ also more thoroughly sought to hogwash Bannon’s claims of executive privilege by pointing squarely back to Trump’s own words and actions.

“The Defendant repeatedly asserts in his briefing that there was an invocation of executive privilege by former President Trump that allowed the Defendant to ignore the Committee’s subpoena entirely,” the document asserts.  “But the Defendant does not identify when the privilege was invoked, how it was invoked, or over what information it was invoked, nor does he explain why it allowed him to legally default. In fact, there is no evidence that the former President ever invoked executive privilege over the materials and information sought by the Committee’s subpoena in a manner calling for total noncompliance.”

“Accordingly, the Court does not need to consider whether any invocation validly allowed the Defendant’s total default, because the Defendant has failed to demonstrate that there was, in fact, any such assertion of privilege in the first place,” it continues.  “The Defendant’s claims for dismissal based on executive privilege must be rejected.”

The only evidence of a possible privilege claim, the DOJ said, were “communications [Bannon] received from the former President’s counsel, Justin Clark.”  And those, the DOJ argued, were not legally sufficient to assert protection:  “Whatever the validity of an assertion by the former President might be, however, Mr. Clark’s correspondence never explicitly assertd executive privilege, never claimed that any such privilege applied to all potentially responsive records, and never directed the Defendant to refuse to appear for a deposition.”

In other words, per the Committee and accordingly per the DOJ, Bannon either needs to hand over the material or be prosecuted.

Both Bannon’s motion to dismiss and the government’s reply are below: