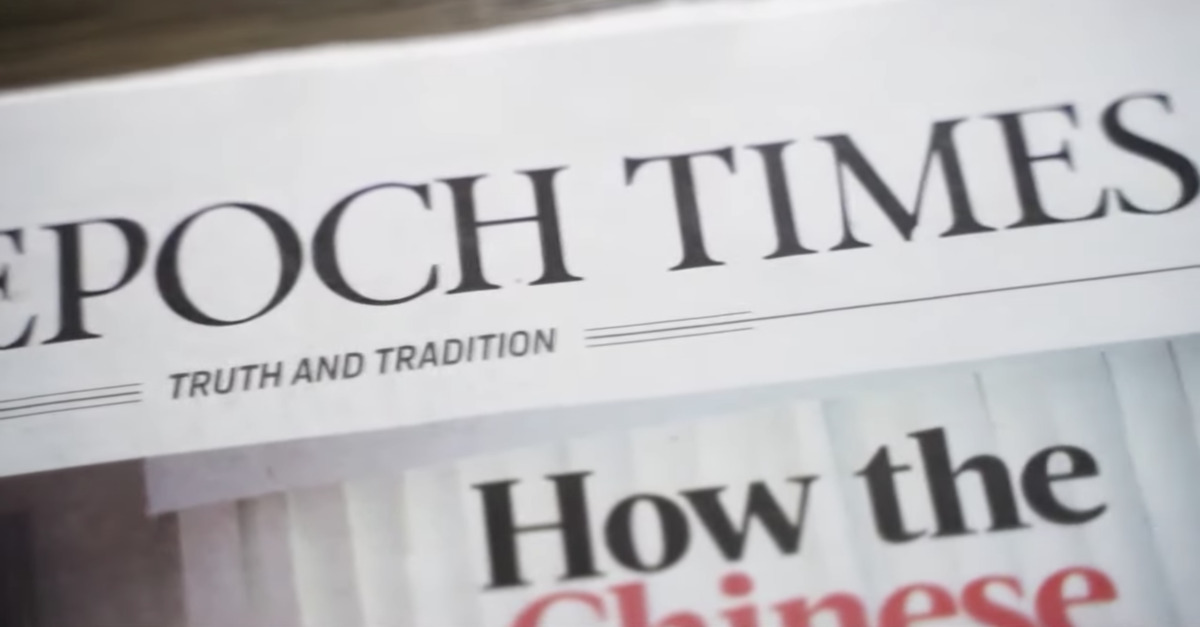 The publisher of The Epoch Times and an executive who co-founded the far-right newspaper lost an effort to revive a defamation lawsuit against a Maine reporter who accurately reported on that founder’s conspiracy theory about the Jan. 6th attack on the U.S. Capitol Complex.

In a blistering opinion, a three-judge panel of the First Circuit unanimously found that the reporting alleged to be defamatory was in fact “substantially true.”

On June 16, 2021, the Beacon, which is published by the Maine People’s Alliance, ran an article written by reporter Dan Neumann titled “Maine GOP hosts speaker present at Jan. 6 Capitol assault.”

The Maine Republican Party co-sponsored a community forum in Windham on Monday evening that included as a panelist a far-right media personality and conspiracy theorist who has said she was among the supporters of former President Donald Trump who were present at the riot at the U.S. Capitol on Jan. 6.

Dana Cheng, vice-president of the right-wing multi-language newspaper and media company Epoch Times, was invited by the Gray Republicans to brief their members about the threats posed to Americans by the Chinese government.

Cheng and the newspaper’s publisher, both of whom are based in New York City, sued Nuemann and the Maine People’s Alliance in the Pine Tree State under diversity jurisdiction, alleging defamation. Additionally, Cheng alleged that the reporter’s description of her comments constituted false light invasion of privacy and intentional and negligent infliction of emotional distress.

The Epoch Times plaintiffs wanted the article retracted, an injunction that barred the reporter and the non-profit news outlet “from further publication of any false, malicious, defamatory or materially misleading comments regarding Plaintiff[s],” and various damages.

The Beacon defendants moved to dismiss for failure to state a claim under federal law and under a New York State law that dismisses certain defamation lawsuits quickly by finding them to be strategic lawsuits against public participation (SLAPP), or actions intended to chill free speech. A district court agreed with the defendants.

Reviewing the case with a fresh look, the U.S. Court of Appeals for the First Circuit dispensed with the possibility of resolving the case under either New York or Maine law and affirmed the dismissal under “dispositive First Amendment principles.”

For the reviewing court, the case was an easy call.

“Such a falsity must be material, not merely a minor inaccuracy,” the court went on to note, later describing the challenged comments as “substantially true on their face.”

In their bid to resuscitate the defamation lawsuit, Cheng and the Epoch Group (which owns the website and newspaper) argued that three comments, combined, created a defamatory inference.

Here, Cheng appeared on a Denver-based radio program to describe attendance at the pro-Donald Trump rally that immediately preceded the abortive Capitol Hill insurrection. That appearance occurred the day after the attack. In her remarks, she speculated, allegedly based on readers’ submissions, that anti-fascist infiltrators were actually responsible for the violence on the day in question – a far-right conspiracy theory with no basis in fact. In actuality, the violence was undertaken by the 45th president’s own, far-right supporters.

Here’s how Cheng described the riot:

Cheng alleged during the radio interview that the violence that day was perpetrated by antifascist infiltrators — a false refrain echoed throughout conservative media in the days after the insurrection.

Additionally, the plaintiffs complained about the article’s title as well as Neumann’s reporting that Cheng was “present at [the] Jan. 6 Capitol assault” and “present at the riot at the U.S. Capitol on Jan. 6.”

“[T]he plaintiffs contend that the defamatory inference at issue is that Cheng was a ‘full, enthusiastic, and partisan participant in the violence of January 6, 2021’ and/or that she ‘was present as a violent participant in the January 6 violent assault on the Capitol,'” the appeals court explains. “The defamatory inference on which the plaintiffs stake their claim is that Cheng participated in the violence on January 6. We reject the argument.”

Taking the Article as a whole, the argued inference is implausible.

If considered individually, the challenged statements are not actionable. Three of the challenged statements are not actionable because they are substantially true. These are the Article’s headline and the statements that Cheng was “among the supporters of former President Donald Trump who were present at the riot at the U.S. Capitol on Jan. 6” and that she “alleged during [her appearance on The Kim Monson Show] that the violence that day was perpetrated by anti-fascist infiltrators.”

A complaint cannot plausibly allege falsity where, as here, materials incorporated into the complaint refute that very assertion.

“Because the plaintiffs have not plausibly alleged defamation under First Amendment principles, we affirm,” Circuit Judge Sandra Lynch concludes, in summary, handing the Epoch Times and Cheng a loss.