Woman Who Insisted Trump Was Playing ‘4D Chess’ and Would ‘Still Be Our President’ After Jan. 6 Pleads Guilty to Entering Capitol 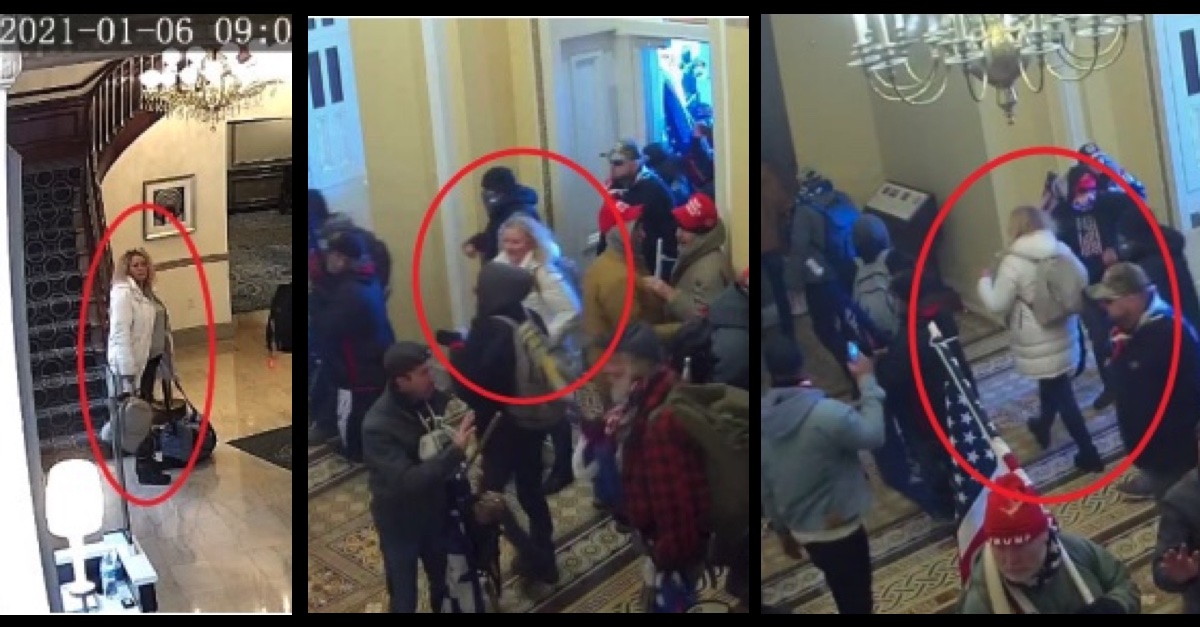 A Pennsylvania woman who shared videos as she joined the mob of Donald Trump supporters breaching the U.S. Capitol on Jan. 6 and then posted that she needed to “scrub” her social media page has pleaded guilty to a misdemeanor.

She pleaded guilty Wednesday to the charge of entering and remaining in a restricted building. The charge carries a penalty of up to a year in prison.

After running through a series of questions to ensure O’Brien was aware of the consequences of pleading guilty, Senior U.S. District Judge Royce Lamberth, a Ronald Reagan appointee, accepted O’Brien’s plea.

Federal investigators were able to identify O’Brien thanks in large part to the white jacket she wore before and during the Capitol breach.

According to the FBI’s statement of facts:

Investigators then identified O’Brien on surveillance footage from inside the U.S. Capitol. She was wearing the same coat and carrying a gray backpack.

When the FBI executed a search warrant at O’Brien’s home in March, agents learned that the white jacket was at the house after Jan. 6, but it was apparently destroyed by an exploding can of bear spray:

The FBI also seized O’Brien’s phone that day, confirming that it was the same one she had with her at the Capitol on Jan. 6.

“Notably, there were no text messages before February, 2021 on O’BRIEN’s cellular telephone although the FBI was able to locate videos and photograph near the Capitol on January 6, 2021 on her cellular telephone,” the statement of facts said.

But a search of her Facebook history revealed social media posts indicating O’Brien’s willingness to go to great lengths to keep Trump in office.

On Nov. 6, she posted: “DO NOT GIVE UP THE GOOD FIGHT! Elections will not be stolen in this country. Not My Country. What it took to accomplish THE MIRACLE known as THE UNITED STATES OF AMERICA is amazing. Fight for this. Fight for your freedom. Fight for future generations. It’s up to you. DO NOT GIVE UP! We will win this. Truth always prevails.”

On Nov. 8, she wrote: “STOP WATCHING CORPORATE MEDIA OUTLETS. AND YES, THIS INCLUDES FOX NEWS. There is so much information out there that validates Trump’s fraud claims and they rarely get reported by mainstream media, including Fox News. There are many, many reasons for this. But that’s for another day. Do not give up or give in. So many lawsuits are being filed on Monday and are going to The Supreme Court. The media doesn’t decide who our President is. We do … YOUR PRESIDENT IS FIGHTING FOR YOU! KEEP FIGHTING FOR HIM!”

In the aftermath of the 2020 election, Trump and his allies filed more than 60 cases alleging voter fraud. None of them succeeded.

On Nov. 21, 2020, O’Brien posted to a Facebook group dedicated to impeaching Pennsylvania Gov. Tom Wolf (D) that she “would rather die on my feet than live on my knees. PATRIOTS UNTIED [sic].”

On Nov. 25, O’Brien commented on a post from the day prior, and stated: “Don’t worry, Howie. The O’Brien armory is well stocked. Just in case. These idiot’s don’t even realize how hard it is to buy bullets. They’re gone. We ain’t worried. Lol.”

On Nov. 26, O’Brien replied to a comment on a post from Nov. 19, saying: “We do not riot. We fight. We are an Army of Patriots. You will know us when you see us. There will be no ambiguity. Prepare yourself.”

O’Brien also posted from the Capitol on Jan. 6.

An FBI tipster identified by prosecutors only as Witness #1 told investigators that they saw multiple videos O’Brien posted to her Facebook page that appeared to show her “leading up to her entry into the U.S. Capitol.” This person, a Facebook friend of O’Brien, said that two videos appeared to be taken from the lawn in front of the Capitol, and a third showed her under the inauguration scaffolding, saying she was with the crowd and asking viewers to “pray for us.”

Also on Jan. 6, O’Brien seemed to hint in a Facebook post that she was in the office of House Speaker Nancy Pelosi (D).

“I’m out. I’m safe. Someone may have trashed a certain speaker of the houses office,” O’Brien wrote. “But I will never tell who.” 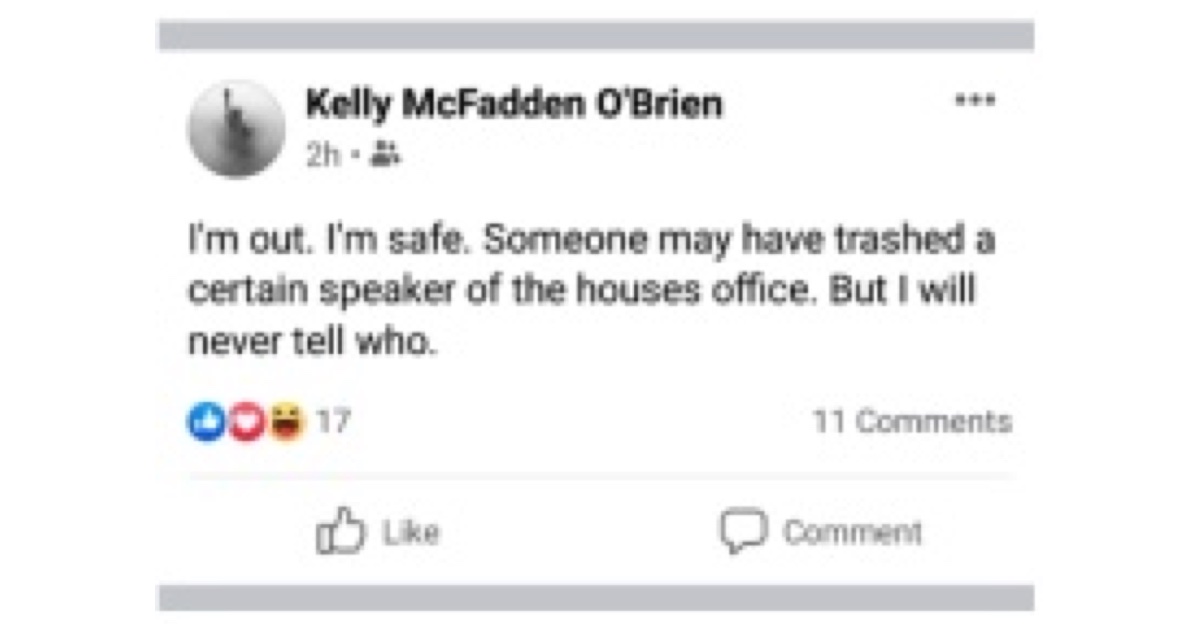 The tipster told investigators that on Jan. 7, O’Brien appeared to have tried to cover her tracks, while still insisting that Trump supporters were right to overrun police and attack the Capitol in order to stop the congressional count of Electoral College votes and block certification of Joe Biden’s win in the 2020 presidential election.

“Had to scrub my page, for obvious reasons,” O’Brien posted on Facebook, according to prosecutors. “Glad some were able to see the truth of what happened. This is why it’s os important you become part of the Revolution in our fight for freedom. You must see the lies yourself to truly understand what is going on. We are at a dangerous point in our country. You must pick a side. Good or evil. Have no fear. Trump will still be our president. Trust his plan. He plays 4D chess while they play checkers.”

O’Brien then pivoted and appeared to distance herself from the videos she posted.

“Please disregard/delete any video I shared previously from the capitol,” her post said. “Thank you. I make no claim. I shared it only.” 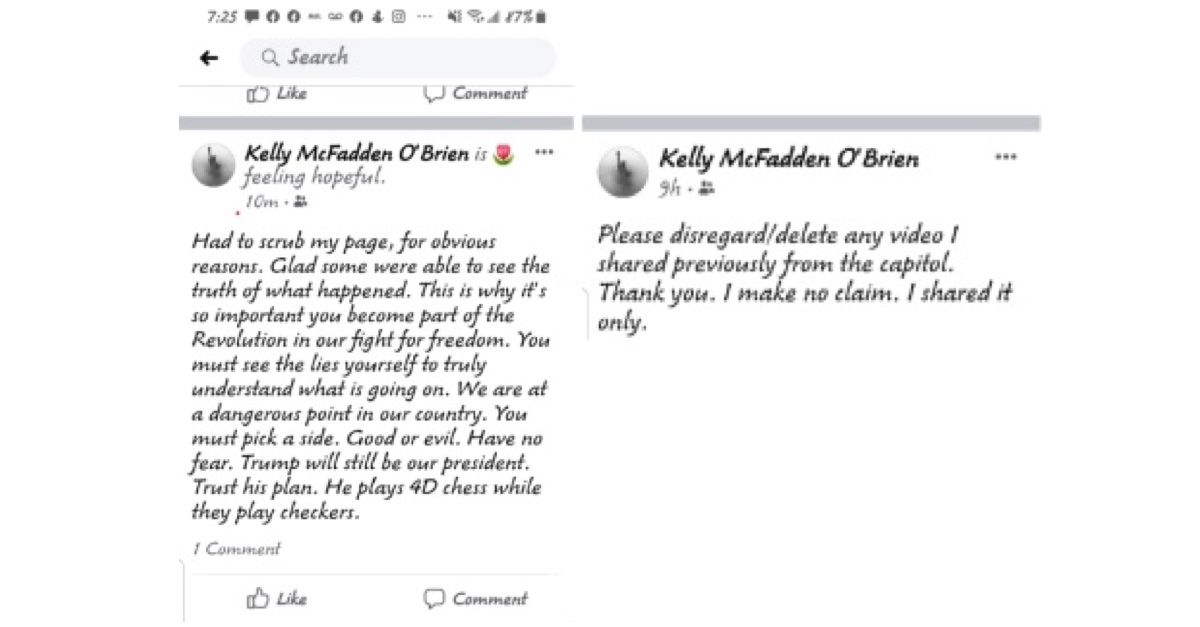