Iowa Father Who Envisioned ‘Hangings on the Front Lawn of the Capitol’ and His Son Both Plead Guilty in Jan. 6 Siege 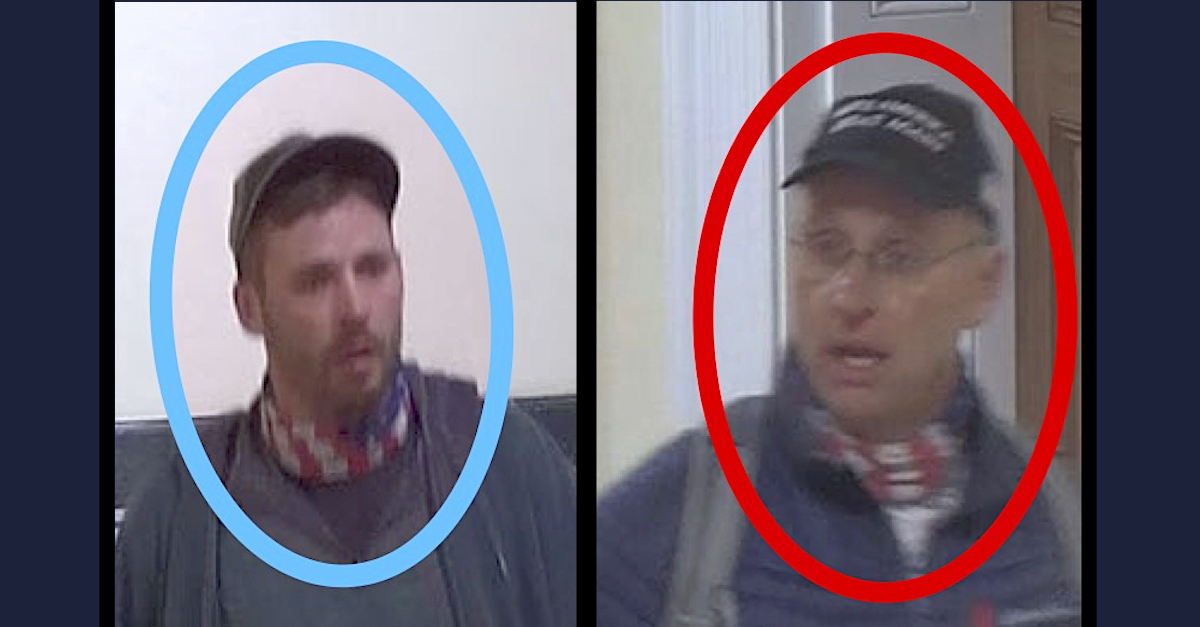 A son and father from the Midwest have pleaded guilty to offenses connected to the Jan. 6, 2021 siege on the U.S. Capitol Complex, the Department of Justice announced on Tuesday.

The father, Daryl Johnson, 51, of St. Ansgar, Iowa, and his son Daniel Johnson, 29, of Austin, Minn., admitted to a charge of civil disorder, according to court records. The DOJ says both men climbed through a broken window and “remained in the capitol building for approximately 26 minutes.” The men then joined forces with others present and “rushed” a group of officers “and helped push open the East Rotunda doors, allowing rioters outside to enter,” according to the DOJ. 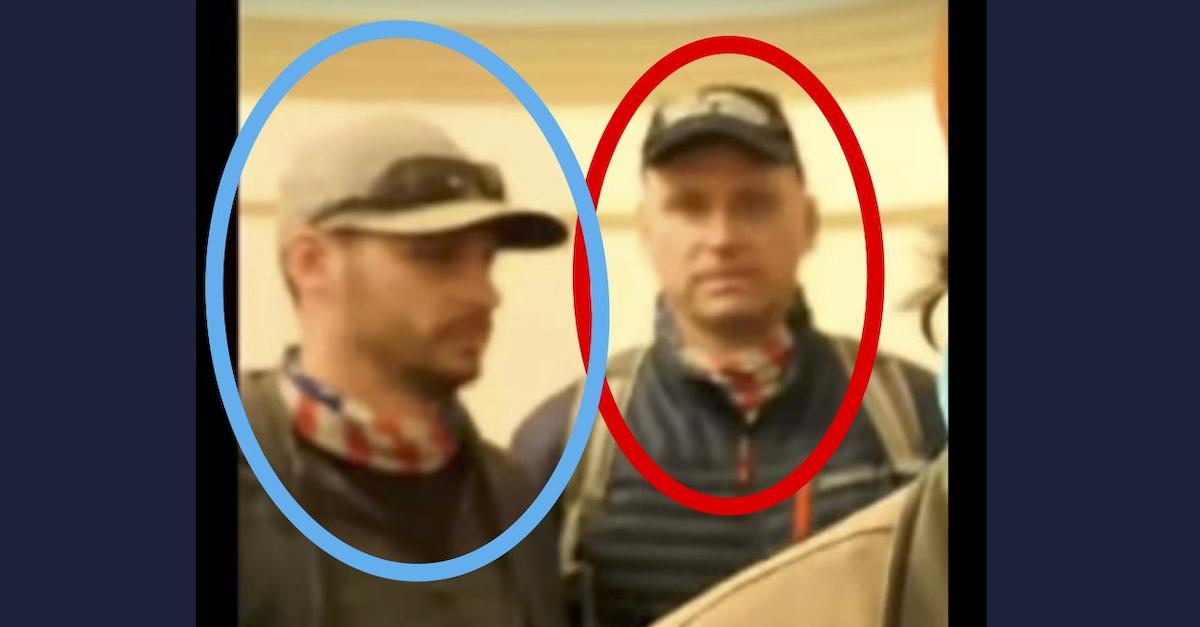 Daniel Johnson (left) and his father Daryl Johnson (right) appear in a video screengrab from inside the U.S. Capitol. (Image via federal court documents.)

Like many others charged in connection with the attack, both men posted messages on social media about their exploits.

Besides a Snapchat message by Daniel Johnson to a friend that contained an admission that he was “one of the first ones inside,” the messages provide further insight into the thoughts of the two men and allegations against them. Both men insisted that millions of Trump supporters were in D.C. on Jan.6. 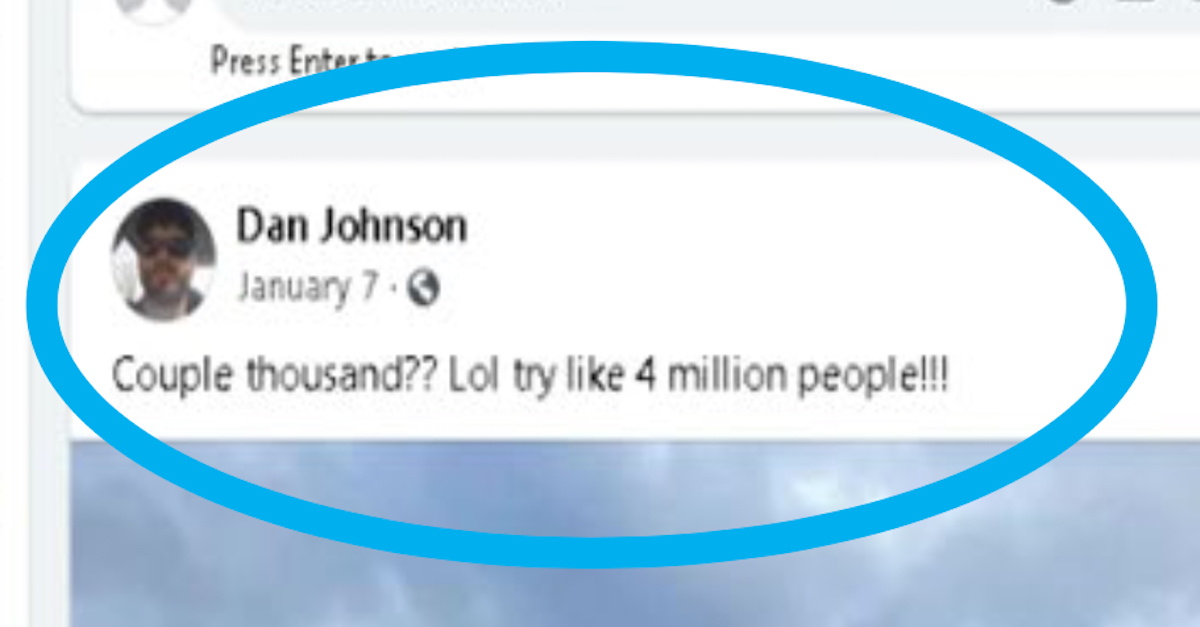 A Facebook message posted by Daniel Johnson to Facebook on Jan. 7, 2021, took issue with the estimated size of the pro-Trump crowd at the Capitol on Jan. 6. (Image via federal court documents.)

His father posted on Facebook on Jan. 7, according to a federal court document:

Mark my words Yesterday will be the beginning of the revolution That crowd was full of several million patriots that got off the couch and came to DC – most of them had never been to a rally EVER! Think about it – if can get 50+ year old men and women upset enough to spend thousands of $ to come to a rally what happens when those same people decide to throw out the “elected officials” It will be hangings on the front lawn of the capitol – that crowd is not messing around – I now understand what our founding gathers gave up their fortunes for freedom – Thai [sic] generation will follow suit.

Elsewhere online, Daryl Johnson mimeographed a popular right-wing talking point. He blamed Antifa for the violence and the police for attacking the wrong crowd.

“You need to look more deeply into what actually happened,” the father wrote in response to someone named “Brett.”

“[W]hat the media is saying is completely false,” he continued. “It was Antifa causing the damage. I was there! Trump supporters were restraining the Antifa people. Do not believe the reports — it’s a complete BS.”

“I was there the media story is completely crap,” he said elsewhere.  “The protesters were peaceful until the police started throwing flash bangs and gas at the peaceful crowd.” 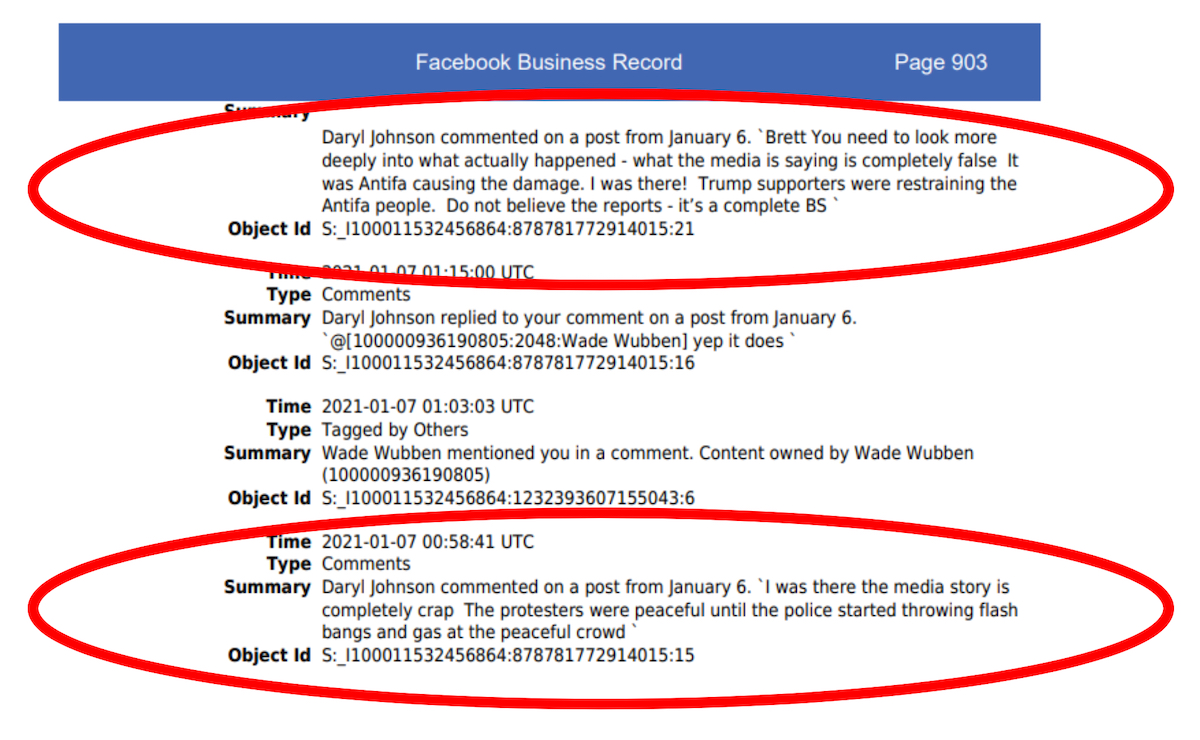 Facebook records indicate that Daryl Johnson blamed Antifa and the police for what occurred on Jan. 6, 2021. (Image via federal court documents.)

Both men were charged via a superseding information of five counts: obstructing, impeding, and interfering with law enforcement; entering and remaining in a restricted building; two counts of disorderly and disruptive conduct in the U.S. Capitol; and parading, demonstrating, and picketing in a Capitol building.

Both men could face up to five years in prison and a $250,000 fine, the DOJ said in a press release, though most sentences thus far have fallen well short of the maximum possible punishments. Sentencing is scheduled for April 12. 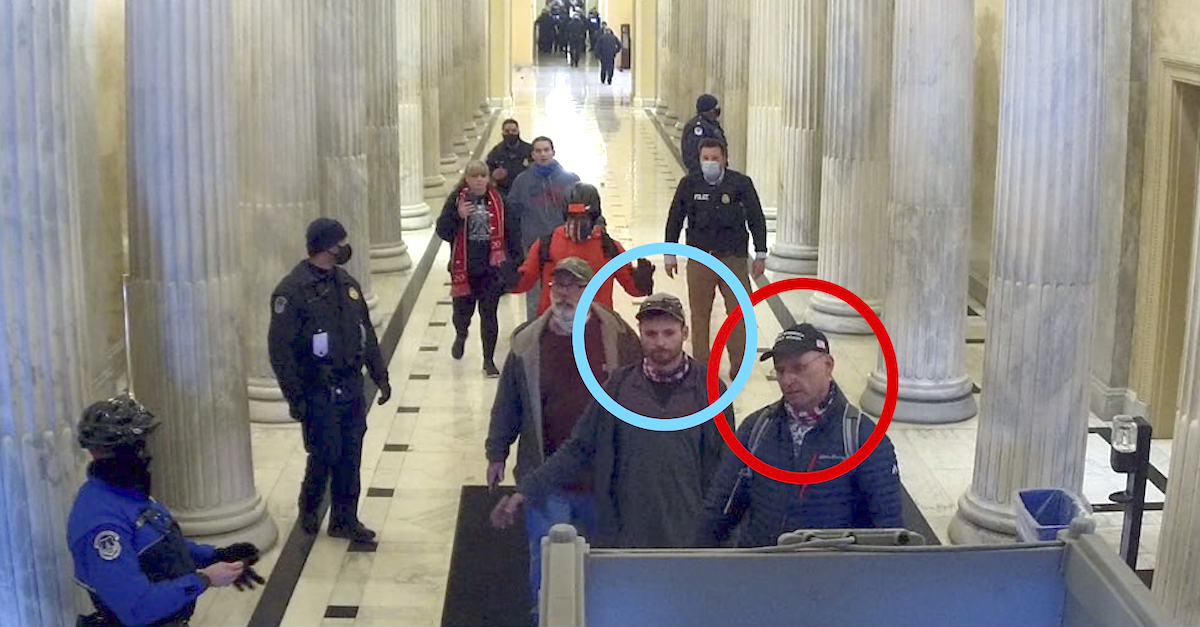 The DOJ noted that more than 725 people have been arrested in connection with the Jan. 6 attack. More than 225 have been charged with either assaulting or “impeding” law enforcement officers. More than 165 people have pleaded guilty.

Read some of the case file below, including the charging documents and the plea agreements: