Suspect Blamed Jan. 6 on BLM and Antifa, Allegedly Admitted to FBI Agent: I ‘Broke into, Well, Air Quotes, Broke into’ the Capitol 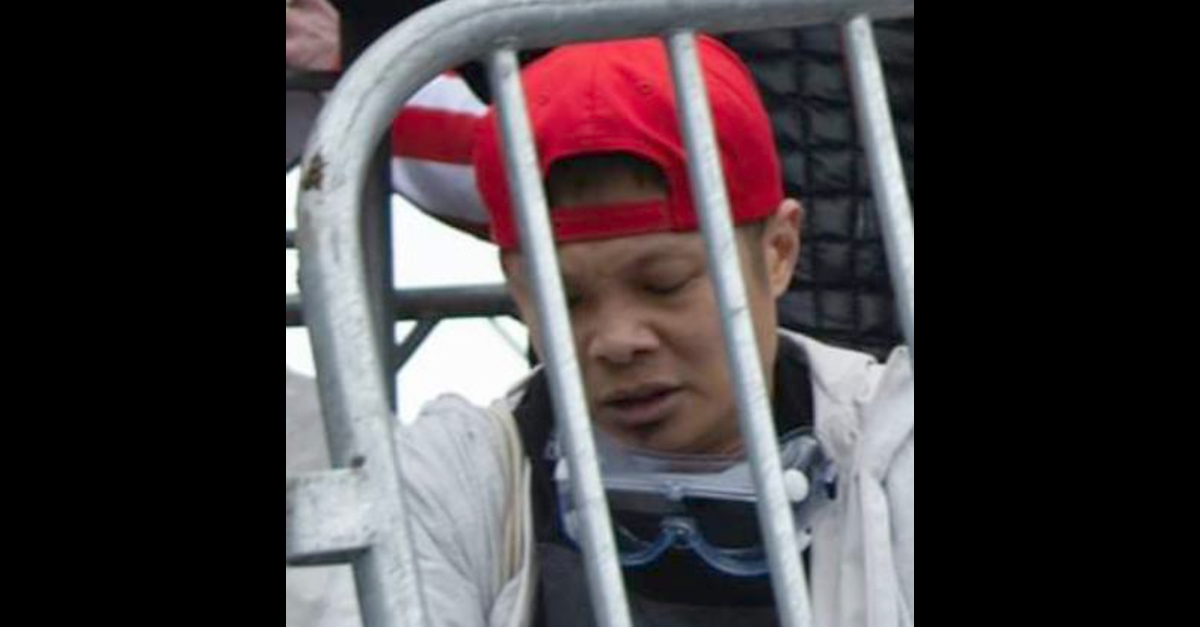 A defendant identified as Mick Chan by the FBI appears in a photo submitted as part of a tip.

A Capitol siege defendant outed himself to the FBI while using so-called “air quotes” to walk back his culpability — in part because he believed left-wing activists were really to blame.

According to federal court documents, Mick Chan “called the FBI because he believed the Trump rally [at the Ellipse] was infiltrated and the breach of the Capitol was carried out by members of Antifa and Black Lives Matter.”

“CHAN believed Antifa and BLM counter-protesters were masquerading as Trump supporters and noticed that there were people with camouflage backpacks who looked like members of the Oath Keepers but did not have Oath Keepers insignia,” the criminal case indicates.

The matter unravelled when an anonymous tip rolled in to the FBI. According to court documents, it read as follows:

My friend [name redacted], her friend Mick Chan, her mother [name redacted] and an unidentifiable person was at the capital leading the charge of mob-members that broke into the capital. I have screenshots of her posting via Facebook that she was in attendance. I then called her the following day and got a play by play action report of what she and her friend/mother have done leading the charge and inside the capital. At the time of speaking she was staying at the Hyatt in Alexandria, VA for 4 days. At this time I believe she[’]s back at home where she resides with her father in Jersey City, NJ and her mother in Monmouth Beach, NJ.

That tip led the FBI to the friend — known eventually in court records as “Person 1.” The FBI noted that “Person 1” admitted to being around the U.S. Capitol on Jan. 6th but denied entering the building; phone records obtained by the feds could not place Person 1 within the building. One of Person 1’s posts tagged Chan: 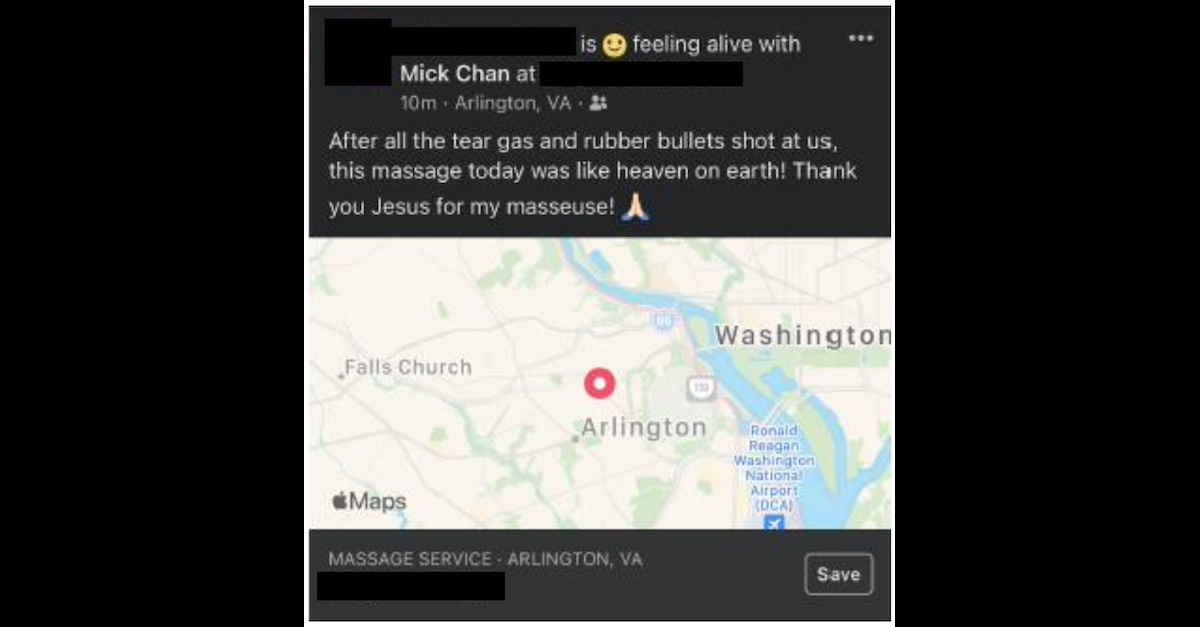 Another post spoke of Jan. 6 in rather magnanimous terms; however, it did not appear to directly implicate Chan: 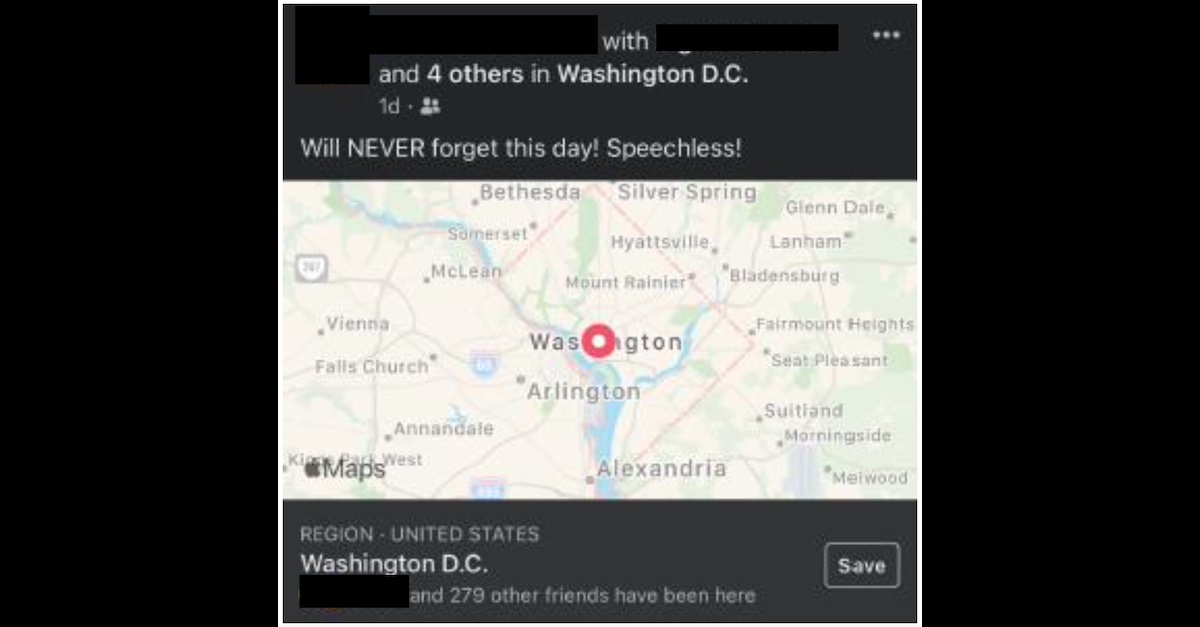 According to court documents, Chan decided to implicate himself just two days after the Jan. 6 siege. The FBI says Chan received a special agent’s phone number from a friend and sent this text: “Someone about to post on my behalf thru fb . . . I’ll be known publicly that I’ve entered Capitol. Any fallout u think I should be aware of?”

That was on Jan. 8. A phone call ensued on Jan. 9. The court records indicate that Chan spilled his guts in a series of stunning admissions:

[H]e admitted to entering the U.S. Capitol on January 6, 2021. CHAN said he traveled to Washington, D.C., with two female friends. CHAN told the FBI that he attended the January 6, 2021 rally at which President Donald Trump spoke and walked with the crowd to the Capitol. CHAN saw confrontations with law enforcement officers and fences being torn down but denied being involved in those confrontations or removing any fences or barricades. Around 2:00 p.m., CHAN climbed up bleachers or scaffolding on the West Front of the Capitol to take photographs, which he believed made him one of the first dozen or so people to climb up in this area. CHAN was hit by what he believed was a paintball fired by police officers, which left a welt on his temple. CHAN and others nearby coughed from a substance in the air. CHAN observed that it took about an hour for people to breach the initial barriers and that they were able to enter the Capitol about 15 to 20 minutes later.

CHAN told the FBI that he “broke into, well, air quotes, broke into” the Capitol. CHAN clarified that others had already forcefully breached the Capitol before he entered. CHAN saw a camera inside a doorway, which led to a staircase. CHAN noticed that about eight to ten police officers were at the doorway, attempting to lock it down. He claimed he left the area after a rioter attempted to rally others to break through the line of officers because he did not want to take part in any confrontation. CHAN walked around the Rotunda for about 15 minutes, taking pictures. CHAN saw people affected by tear gas and a line of police officers, and he heard some rioters say they had come from the Senate, where there were police officers with guns. CHAN estimated that he was inside the Capitol for about 30 minutes until being forced to leave. Most of the rioters were compliant with police officers’ directions but some pushed and yelled obscenities. CHAN did not witness any violence but did hear rioters say things like, “we backed the blue but next time we’re coming with guns.”

That conversation led to Chan’s claim that BLM and Antifa activists were infiltrating the Trump purists.

Additional tips to the FBI included photos which appeared to show Chan moving a barricade outside the capitol building. Yet another tip contained a text message purportedly sent by Chan which indicated Chan wished to “expose msm [mainstream media] lies at Capitol Hill.”

In a subsequent interview, Chan told the FBI that he “believed that the lack of counter-protesters was due to members of Antifa being present in disguise.”

CHAN said that he was hit by a paintball on his right temple and tear gassed, and showed the mark on his temple to the FBI. CHAN witnessed a confrontation between officers and rioters in which rioters threw things at the officers, took officers’ shields, and broke a Capitol window.

CHAN entered the Capitol by himself and saw eight or nine police officers locking the doors behind him. He claimed that he entered the Capitol with “journalistic intent.” CHAN denied witnessing any violence or destruction of property inside the Capitol. CHAN took some videos inside the Capitol but his phone ran out of memory, and he sent some videos and photos to news media outlets. In the Capitol, CHAN wore a red hat backwards and black jeans, which still had dye on them from the paintballs. CHAN saw people wearing camouflage but denied previously telling the FBI that he saw members of the Oath Keepers and denied knowing who the Oath Keepers were. CHAN did know of the Proud Boys and had previously met members of that group. CHAN encountered two men who he believed were members of Antifa; they claimed to have come from the Senate floor and showed him a photo of a pristine-looking Senate floor. CHAN observed police officers wearing riot gear but also police officers using their cell phones. CHAN stayed in the Washington, D.C., area for a few days after January 6 and believed he suffered a concussion. CHAN said he was considering joining a class action lawsuit for people who were tear gassed on January 6.

“Other than CHAN’s statements, the FBI has not uncovered any evidence to support CHAN’s assertion that he was acting as a journalist or member of the news media on January 6, 2021,” a footnote points out.

Federal prosecutors allege that a series of surveillance camera images shows Chan entering the Capitol and, in one case, giving the finger to the camera as he walked into the building. The person behind him was wearing a shirt that said “Fuck Antifa.” 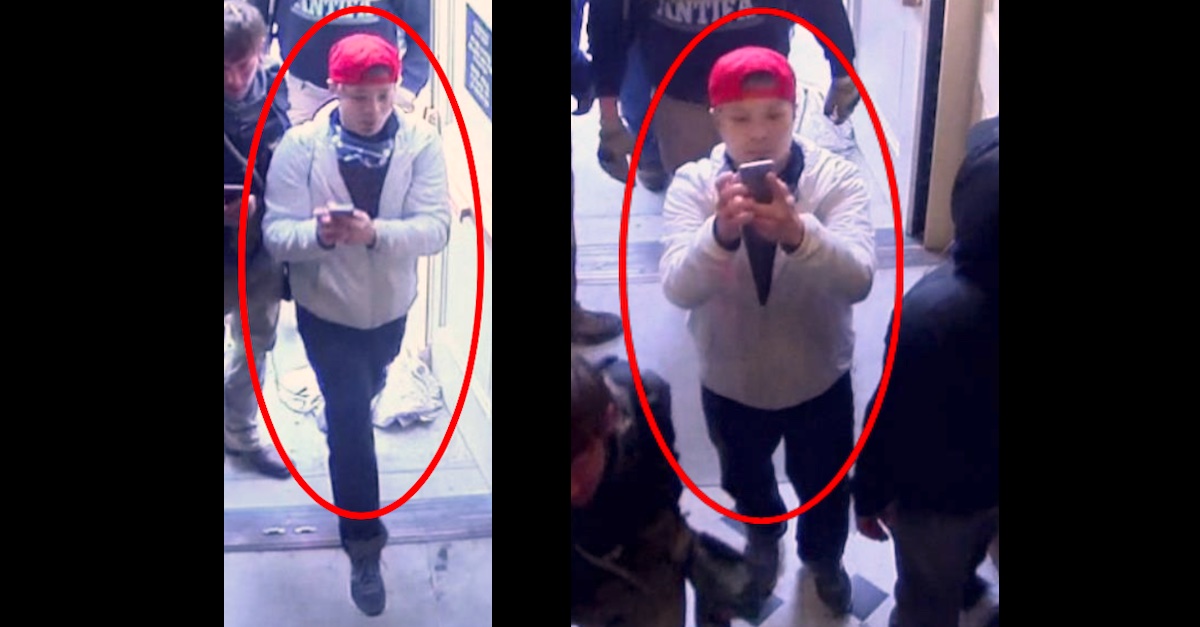 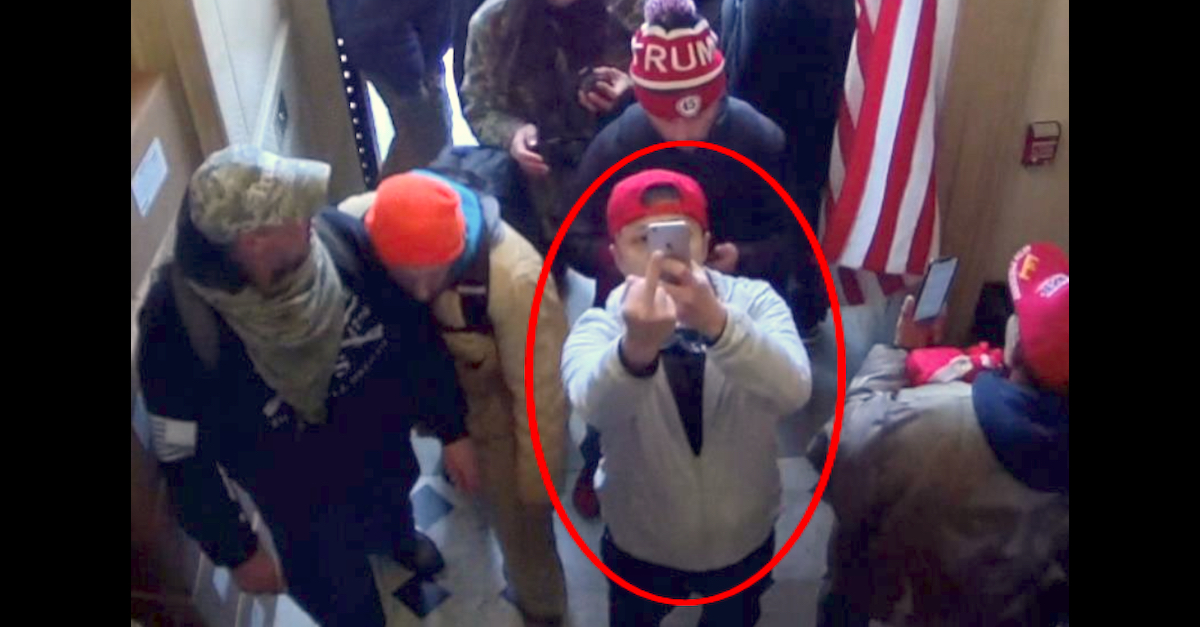 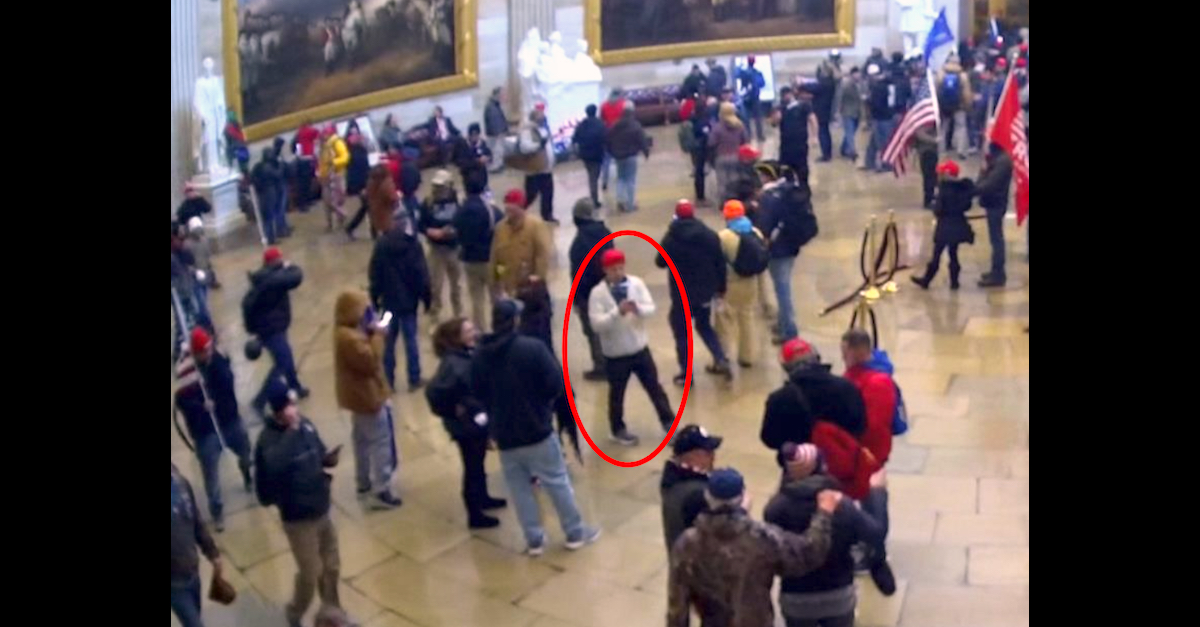 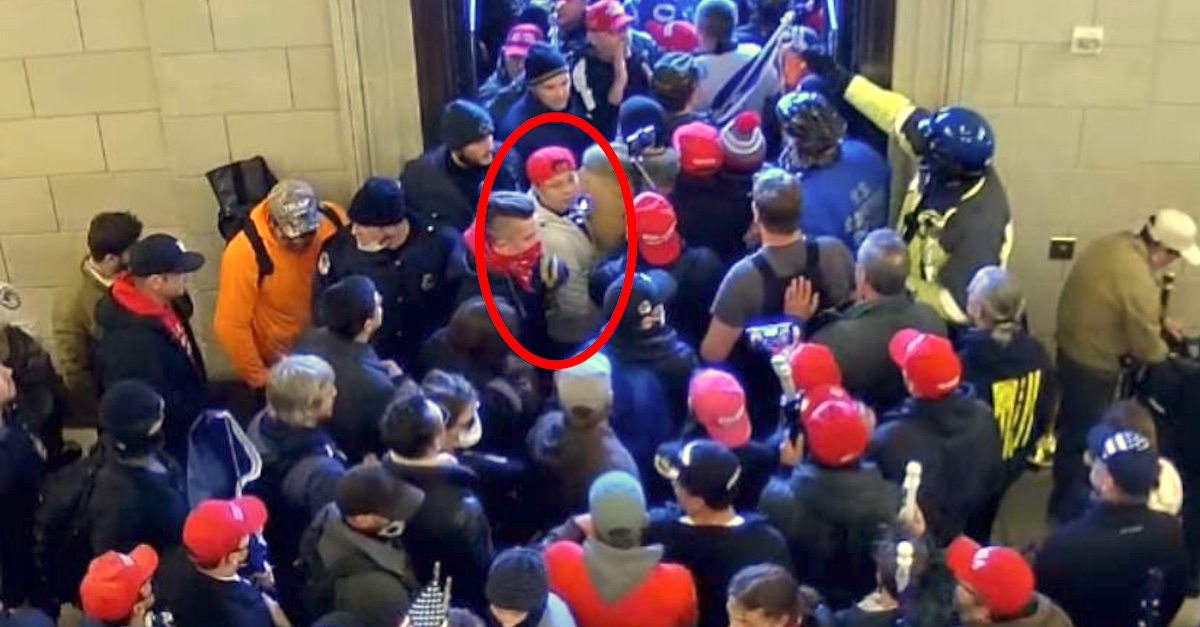 [images via the FBI/DOJ as contained within federal court documents]