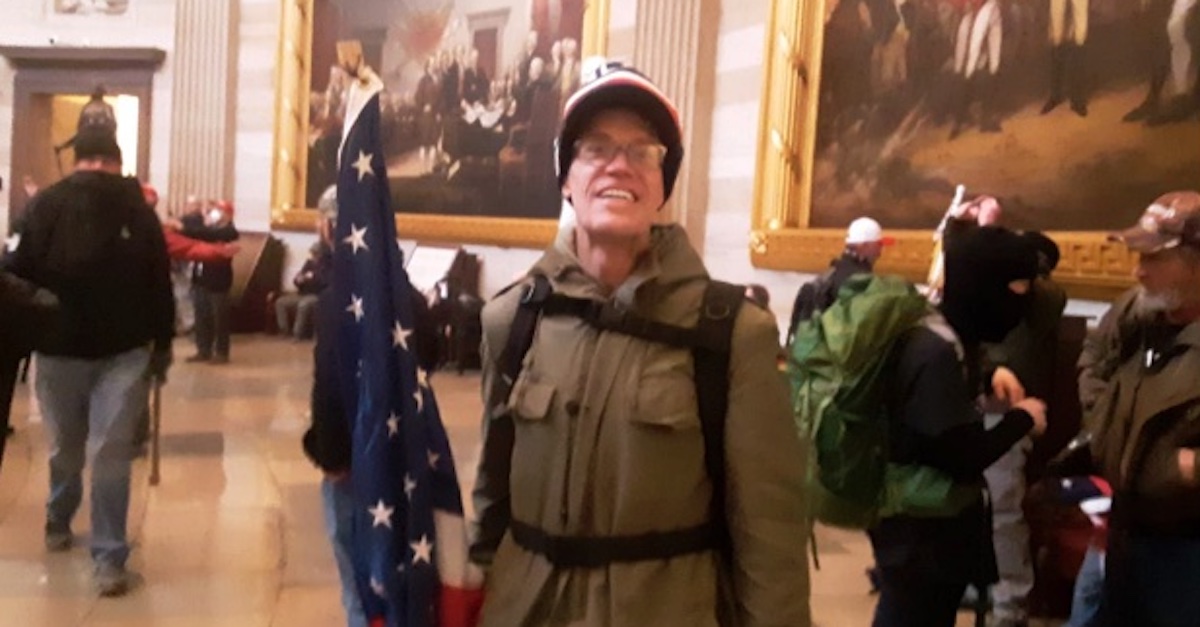 An Army veteran who bragged about being at the Capitol on Jan. 6 and later wrote on a gaming app that he “already had his guns” and planned to “sue people” after his criminal case was done has been sentenced to serve the next three years on probation.

According to federal court records, Kevin Daniel Loftus, 53, made multiple social media posts documenting his time at the Capitol and joked about being pictured in an FBI release seeking information about people who joined the mob of Donald Trump supporters who swarmed the Capitol trying to stop Congress from certifying Joe Biden‘s win in the 2020 presidential election.

“That is right folks some of us are in it to win it,” he also wrote.

But his side lost, and he pleaded guilty in October to one count of parading and picketing in the Capitol building, a misdemeanor punishable by up to six months in prison. Prosecutors had asked for 30 days in jail followed by three years of probation. Loftus had requested a sentence of probation only.

During the hearing Tuesday, Assistant U.S. District Attorney Emory Cole, who pointed out that Loftus was seen in the Capitol wearing a sweatshirt emblazoned with the logo of the pro-Trump QAnon conspiracy theory group, emphasized comments Loftus made on a gaming app in August while his criminal case was still pending as a reason for incarceration.

Loftus had written that he was a “hero” because of his actions on Jan. 6. He noted that another Jan. 6 defendant who pleaded to the same parading and picketing charge was sentenced to three years of probation and wrote that he wasn’t worried.

“[I] already bought my guns lol,” he wrote above a picture of him holding firearms. He also bragged that his “name is in every major [U.S.] newspaper” and indicated that he would sue those who prosecuted him once his case was closed.

Loftus’ comments prompted an FBI investigation. No weapons were found in Loftus’ possession; he told law enforcement that he had turned his firearms over to family members and that the photo of him and the guns was an old picture.

However, Friedrich noted a “tremendous” need to keep tabs on Loftus, and said that she wanted to keep him “under the supervision of the court for a good long time.”

“I do appreciate the government’s concern [about] troubling comments he made while on supervision,” Friedrich, a Trump appointee, said. “He showed a real lack of judgment following the offense and it’s hard to fathom why he fancied himself a hero for his actions on that date, particularly given his service of the country as a member of the U.S. Army.”

In speaking on his own behalf, Loftus said that, perhaps ironically, his prosecution for participating in the Jan. 6 attack changed his view on the government.

“Through this whole process, up until I read Mr. Cole’s words, I have told everybody just how legitimate the system has treated me in this case,” Loftus continued. “[A]t every turn of the road, you folks cared about my rights. You made sure all of my rights were protected. And so in that I would like to say that my faith in the system has been restored through this case.”

In issuing her sentence, Friedrich said that Loftus’ renewed faith in the government moved her.

“While I’m confounded by Mr. Loftus’ reaction his role in the offense . . . I do believe he’s remorseful and I am encouraged by the remarks he’s made today,” Friedrich said. “Criminal defendants here have more rights than anyone else in the entire world. It’s an amazing system. It did work on Jan. 6 and it’s worked since. I’m encouraged he’s felt more faith in the system as a result of his experience thru this process.”

During the hearing, Friedrich repeated her position that she cannot legally issue “split sentences” of both jail time and probation in petty misdemeanor cases.

The issue of split sentences is ramping up to be a major legal matter among judges overseeing Jan. 6 cases. Senior U.S. District Judge Royce Lamberth issued a ruling on Monday saying that the federal probation statute does allow such a sentence.

She also ordered that he perform 60 hours of community service and pay $500 in restitution for part of the estimated $1.5 million in damage to the Capitol.