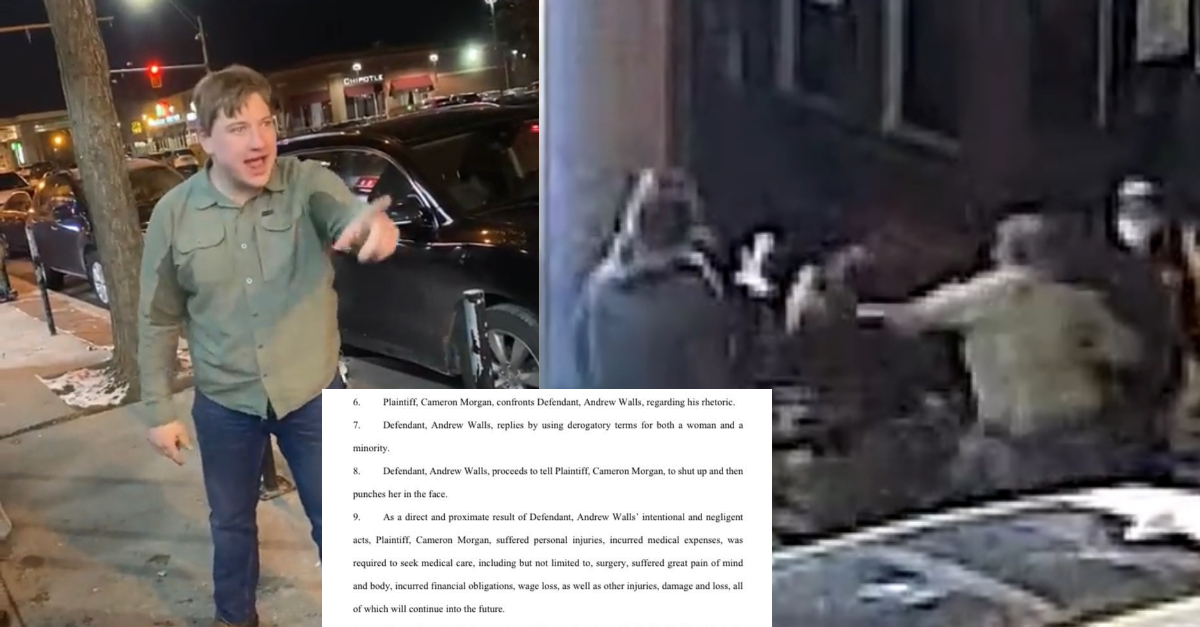 The Ohio man charged with assaulting a young Black woman in a racist attack last month is now being sued by the victim.

In a video that went viral in early March, a man the Akron Police Department identifies as Andrew Walls, 26, walks up to 23-year-old Cameron Morgan and calls her derogatory terms for both a woman and a Black person before punching her in the face and dragging her by the hair into the street.

Morgan, who says she suffered a concussion and split lip, is now seeking $25,000 in punitive damages and $25,000 in compensatory damages from Walls. She is also requesting that he pay her attorney fees, the costs of the actions and any other remedies the court deems equitable and just, according to a court filing obtained by Law&Crime.

Proud Boys founder Gavin McInnes is defending Walls on Telegram and confirming that Walls is a member of the group, which is designated by the Canadian government as a neo-fascist and terrorist organization. A man with the same name as Walls identified himself as a member of the Proud Boys in a January 2021 story in the Akron Beacon Journal. That man was also the same age and looked remarkably similar to the man seen in the attack video.

“This weekend, a gay Proud Boy was jumped by a group of blacks who were calling him ‘faggot.’ As he stumbled around outside after the beating, a chick was gloating and mocking him,” wrote McInnes. “He lost it and punched her while using a racial epithet. The media is running with those last 5 seconds. This is far from over, and the truth will come out.”

That version of events is not seen in the video of the attack. 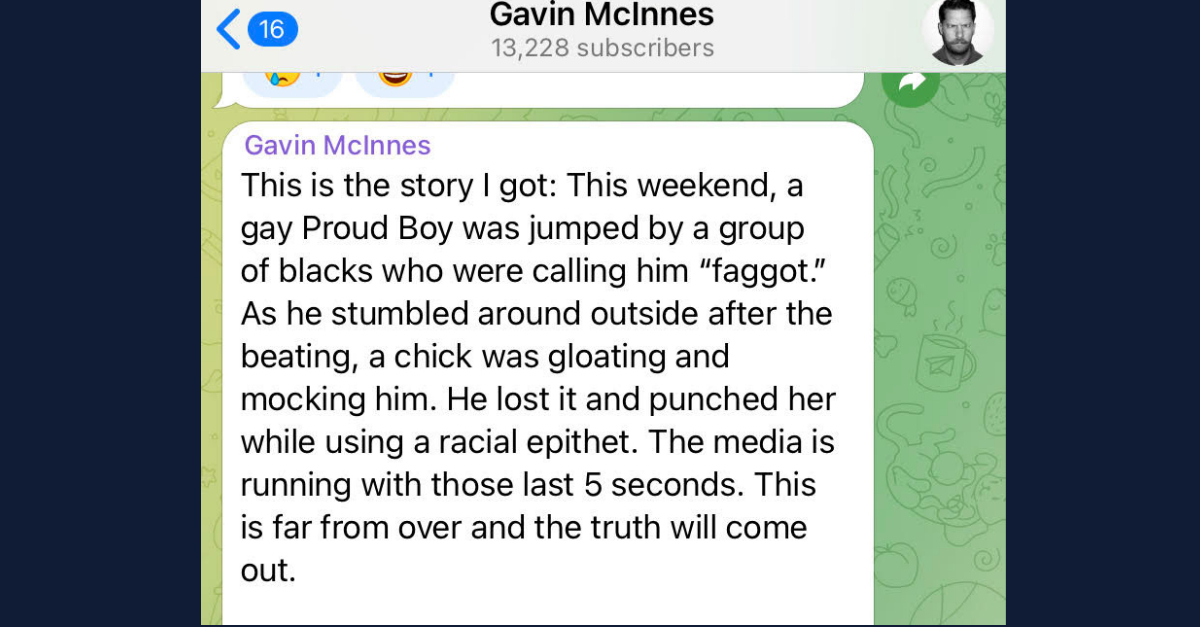 “Not surprisingly, the Proud Boys and other white supremacists are defending Walls,” Morgan’s lawyer David Betras told Law&Crime. “But we are resolute: he, along with anyone and everyone who aided and abetted him, will be held accountable for their actions.”

In the video, the man police now identify as Walls is seen exchanging racial slurs with a group of white men outside a bar. He then abandons the conversation when he sees a group of people walking down the street and walks up to Morgan.

Once he approaches Morgan, she objects to the man’s rhetoric. She only gets a few words out before the man addresses her using derogatory terms for both a woman and a Black person. The man then tells her to “shut up” and punches her in the face.

The victim’s sister recorded the incident and shared it on Instagram.

Akron Police officers reported to the scene soon after the fight dispersed, an officer with the department told Law&Crime. Walls was the only person still at the location, however, and looked to be roughed up from a fight, according to an incident report. The report filed by the responding officer also stated that Walls claimed he was the victim of a mugging.

Morgan reported the incident the next day, and soon people around the city, state, and country began to share the video of the attack. Police also benefited from seeing the video and within 24 hours, had issued a warrant for Walls’ arrest, inmate records reveal.

According to Akron Municipal Court records, Walls is charged with two counts of assault and one count of possessing a weapon while intoxicated. The assault cases bear two separate docket numbers.

Soon after his arraignment, he posted a $25,000 bail and was released from custody. A temporary restraining order was granted for his victim.

“I’ve vowed to sue anyone and everyone involved ‘into oblivion,’ including the Proud Boys if I can connect them to the assault and Ohio law gives me the power to do just that,” said Betras. “It is a power I will not hesitate to use because white supremacy must be thrown on the ash heap of history where it belongs.”

A lawyer for Walls did not respond to a request for comment.

The graphic video of the encounter is embedded below. Some viewers may find it disturbing.

I’m devastated right now. My 23-year-old daughter Cameron, who wouldn’t hurt anyone and has a heart of gold, was sucker punched by this racist guy in Highland Square in Akron last night for no reason. She weighs maybe 100 pounds. Can someone please help me identify him! Please! I need to press charges! I’m heartbroken and sick to my stomach.