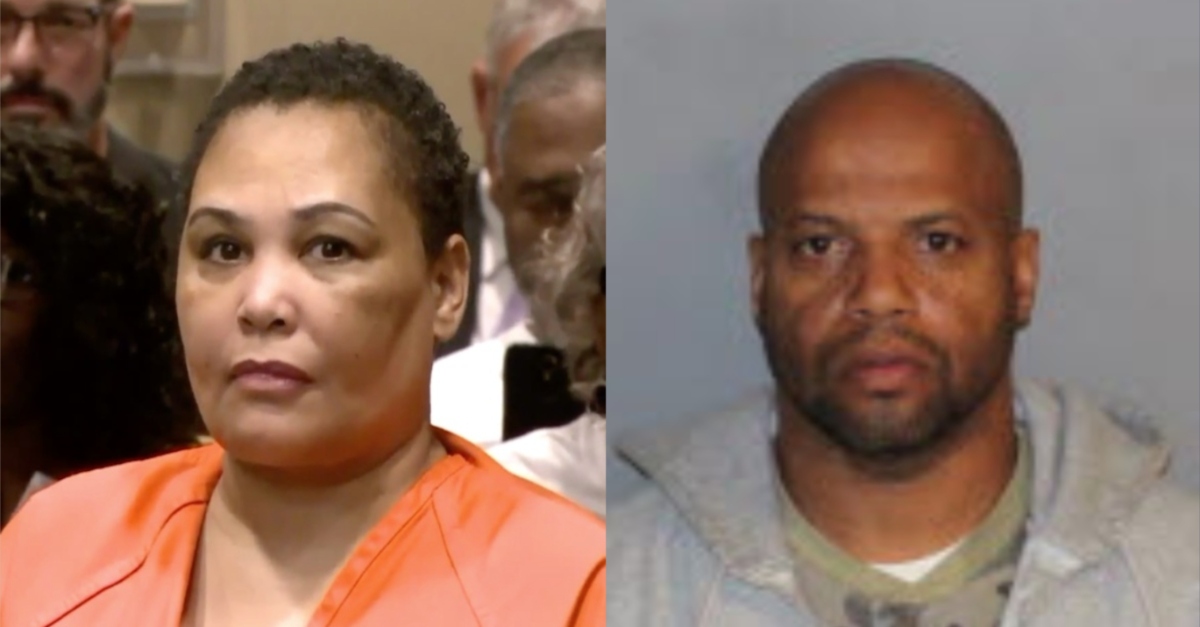 The ex-wife of former NBA center Lorenzen Wright, 34, recruited both her lover and her cousin to murder the basketball star, a prosecutor said Tuesday during opening statements.

Sherra Wright was there when defendant Billy Ray Turner, 51, shot and killed her former husband, according to Shelby County prosecutor Paul Hagerman. She had her own gun and fired it, but she tossed it into bushes when she was excited and scared.

Tennessee authorities say Sherra Wright got Turner and her cousin Jimmie Martin to help plot, execute and cover up the murder, though Martin did not show up when the couple chased Lorenzen Wright around midnight early July 19, 2010 in a remote part of Shelby County.

In his last moments, Lorenzen Wright managed to reach Germantown 911 on his cell phone, but gunshots rang out. 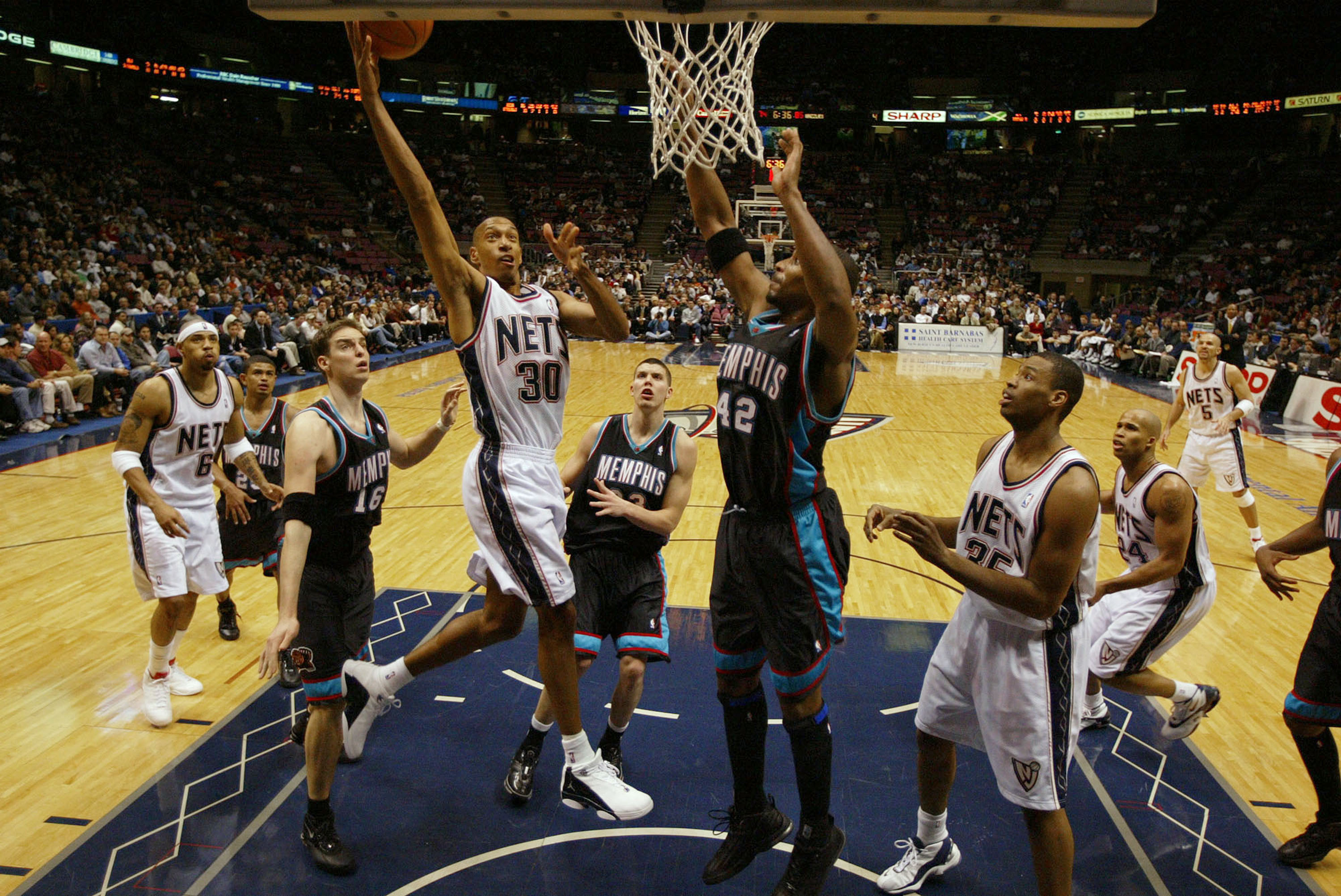 Kerry Kittles #30 of the New Jersey Nets drives for a shot attempt against Lorenzen Wright #42 of the Memphis Grizzlies December 3, 2003 at the Continental Airlines Arena in East Rutherford, New Jersey. (Photo by Al Bello/Getty Images)

According to the prosecution, Sherra Wright’s “evil heart” manipulated both her lover Turner and younger cousin Martin to carry out the plot.

She had paid for Martin’s attorney at the time and got him out on bond while he was facing a then-pending case for murdering his girlfriend Martha Jean Bownes.

Prosecution opening statement: Sherra Wright enlisted the help of her cousin, Jimmy Martin. Wright had paid Martin’s bail and paid for his atty after he was charged with murder of his gf. Prosecutor says #BillyRayTurner, Sherra Wright and Jimmy Martin became a team of killers pic.twitter.com/V7c2JQHlYm

But Turner’s attorney John Keith Perry says his client is innocent. Martin only implicated Turner after getting convicted of murdering Bownes.

Martin reached out to authorities and told them the location of the murder weapon—a lake near Walnut, Mississippi. There’s no dispute there, but Perry asserted that Martin lied about Turner’s involvement and not being at the murder scene.

Hagerman asked rhetorically during his opening statement what it took to kill someone.

“It takes a punk’s heart,” Perry said when it was his time to talk. He maintained Martin acted only out of self-interest when facing sentencing in the Bownes murder. “It takes the type of person who changes facts like a person changes drawers.”

The major complicating factor in the case is that Lorenzen Wright’s body remained in the field for 9 days. Hagerman acknowledged Germantown 911 failed to follow up on the call. The victim’s mother reported him missing after three days, and it was Collierville police who found out about his final, tragic communication with 911.

Hagerman said that if Germantown 911 actually followed up on the call immediately, then police would have quickly found out Wright was last at his ex-wife’s home, they would have found the two guns, and it would not have taken much time to find Martin. In the prosecutor’s account, investigators would have found the barbed wire fence with blood on it from one of the killers hopping the fence.

“And that’s how the murder of a Memphis hero, a father, of a son, brother becomes Memphis’ most publicized mystery cold case,” he said. “If only Germantown had done what they should have done, this would have been over by July 25, 2010. Jimmie, Billy, and Sherra would have been charged, but instead, this became one of the longest and most publicized cold cases in Memphis history.”

Hagerman acknowledged that the case continued to stretch out longer than it needed to after Martin stepped forward in 2012 because volunteer divers could not find the murder weapon in the lake. It had just rained and visibility under water was almost zero. That would change years later when new investigators got onto the case, and had an FBI dive team take a look.

When they found the gun, authorities put both Sherra Wright and Turner under surveillance to see what they did. Wright, then living in California, became “distraught, despondent, suicidal” and wanted to return to Memphis as soon as possible. She hardly told anyone. This was unplanned, said the prosecutor. In the state’s account, she needed to make contact with someone personally instead of calling. That someone was Turner, Hagerman said.

As far as Perry was concerned, however, the wrong person is in the defendant’s seat. Turner is innocent, and this “fiancée killer” Martin is “100 percent guilty.”

“But guess what?” he asked at the end of his opening statement. “Y’all ain’t going to get to determine that, and neither will any Shelby County jury.”