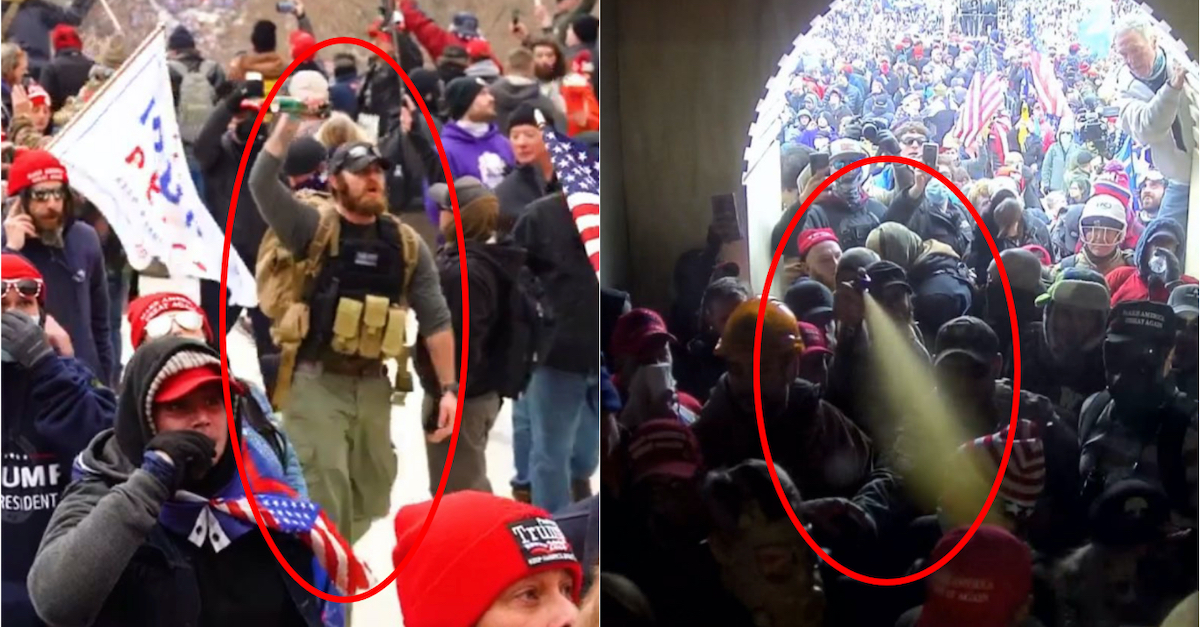 Charged with the Jan. 6 siege of the U.S. Capitol, Christian Matthew Manley stands accused of assaulting officers with pepper spray and throwing a metal rod at them.

Joining a long list of accused Jan. 6 assailants, an Alabama man has been charged with pepper spraying officers and throwing a metal rod at them during the siege of the U.S. Capitol. Christian Matthew Manley, a 26-year-old from Birmingham, was arrested far away from his home on Tuesday: in Anchorage, Alaska, where he made his initial appearance in a federal district court, authorities say.

A separate hearing has been scheduled for Thursday to determine whether Manley will be detained pending trial on seven charges, including engaging in physical violence in a restricted building or grounds, civil disorder, and assaulting, resisting or impeding certain officers. 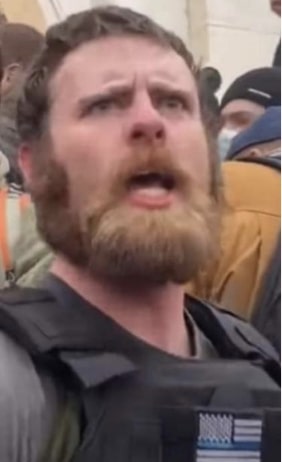 The FBI embedded this image of Christian Matthew Manley sporting a “Thin Blue Line” patch in an affidavit, which supports his charges for allegedly assaulting law enforcement on Jan. 6.

Still frames from open source and U.S. Capitol surveillance video show him holding and deploying what appears to be a pepper spray canister in the direction of U.S. Capitol and Metropolitan Police Department officers. Authorities claim to have pinpointed the assault down to the second, embedding a still frame from security footage time-stamped on 2:53 p.m. and 17 seconds.

A long line of yellowish spray can be seen emanating from the canister in front of what authorities claim to be the circled image of the defendant.

For Manley, the FBI says, one pepper spray canister was not enough.

“CCTV footage shows that at approximately 2:54 p.m., Manley had returned to the interior of the archway and was holding what appeared to be another pepper spray canister in his right hand,” their affidavit states.

A minute later, Manley threw that canister at authorities after deploying it, the FBI says.

That is when authorities say Manley reached for the rod.

“At approximately 2:55 p.m., Manley accepted a metal rod from another rioter,” the FBI wrote, adding that in the video the defendant “can be seen bracing himself against the wall and using his body to push a door against officers trying to defend the entrance.”

Some nine months after the Jan. 6 assault on the U.S. Capitol, authorities have arrested more than 650 people in nearly all 50 states in connection with the siege. Of that number, more than 190 have been charged with assaulting or impeding law enforcement, the U.S. Attorney’s Office for the District of D.C. says. Prosecutors have accused others of assaulting police a PVC pole, a flagpole, a Taser, a fire extinguisher, pepper spray, metal barricades and other weapons. One rioter stands accused of stealing an officer’s badge and burying it in his backyard. Chemical spray appears to have been a common weapon of choice against law enforcement.

In the Oath Keepers conspiracy case, multiple defendants have been accused of leaving a stash of firearms in a hotel outside of Washington, D.C. limits in case the militia group saw the need for a so-called “Quick Reaction Force.” Awaiting orders from former President Donald Trump, the Oath Keepers planned to ferry the weapons across the Potomac by boat, prosecutors say.

Read the FBI affidavit below: