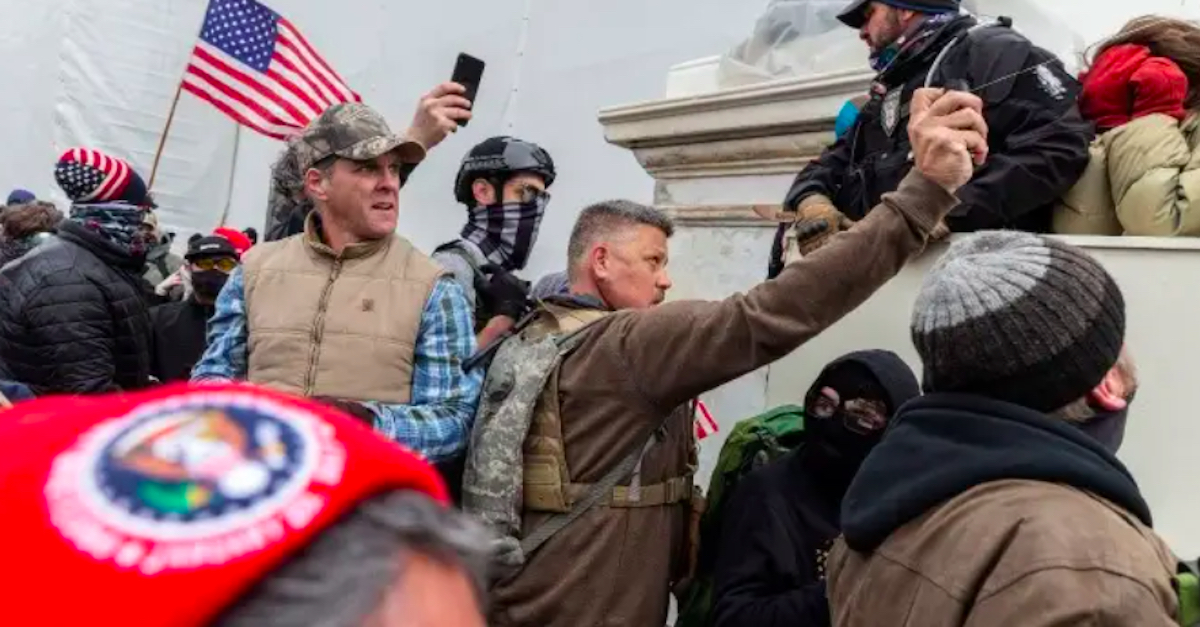 The U.S. Circuit Court of Appeals for the District of Columbia on Wednesday ruled that a member of the far-right Proud Boys militia group accused of using chemical spray on police during the Capitol riot will remain in jail while he awaits his court date.

A three-judge panel unanimously denied Christopher Worrell’s emergency motion to reconsider last month’s district court ruling. Although it appears the court does not see precedential value in the ruling (see: Circuit Rule 36, unpublished opinions), it is a clear signal that the nation’s second-most powerful court is not going to be lenient in cases of Jan. 6 defendants who are accused of endangering police officers.

Worrell, who resides and was arrested in Florida, was charged in March with a litany of federal crimes including “carry[ing] a deadly and dangerous weapon” on restricted grounds. According to the charging documents, Worrell went to D.C. with a tactical vest with a canister of gel-based pepper spray clipped to the front. Video footage from that day also appeared to show him spraying the chemical compound at police officers attempting to stymie the insurrection.

In his emergency appeal motion, Worrell argued that the chemical compound was not a “dangerous weapon,” and were he to be released he would not present an immediate threat to the community.

But the court ruled that Worrell’s attorney “did not adequately preserve his challenge” to the lower court’s finding that the pepper spray gel fell within the definition of a dangerous weapon under the Bail Reform Act.

The court also drew a distinction between its first ruling on pretrial detention for accused Capitol rioters and the circumstances in Worrell’s case.

The Circuit Court in March gave so-called “Zip Tie Guy” Eric Munchel—seen in the Senate chamber carrying tactical restraints—and his mom Lisa Eisenhart a chance for pre-trial release in a ruling reiterating a long established principle, writing, “In our society, liberty is the norm, and detention before trial is an exception.”

Wednesday’s per curiam decision distinguished Munchel’s case from Worrell’s, reasoning that the latter failed to contradict the lower court’s determination that he was dangerous.

Additionally, Worrell on Tuesday asked the district court judge to move his trial outside of Washington, D.C., claiming that “detrimental” media coverage of the insurrection and “community prejudice” inside the nation’s capital would unconstitutionally preclude him from receiving a fair trial.

“A trial in Washington D.C. for Mr. Worrell would be by jurors who voted almost unanimously against Donald Trump, who have been barraged with propaganda about a ‘white nationalist’ attack, who are continuously told they were victims of an ‘insurrection,’ who were placed under curfew and locked down as a result, and who have been placed under seemingly endless military hold because of danger posed by ‘Domestic Violent Extremists,’” the longshot motion stated. “The unavoidable community prejudice, and particularized prejudice against Mr. Worrell, render the venire so greatly prejudiced against him that Mr. Worrell cannot obtain a fair and impartial trial in Washington D.C.”