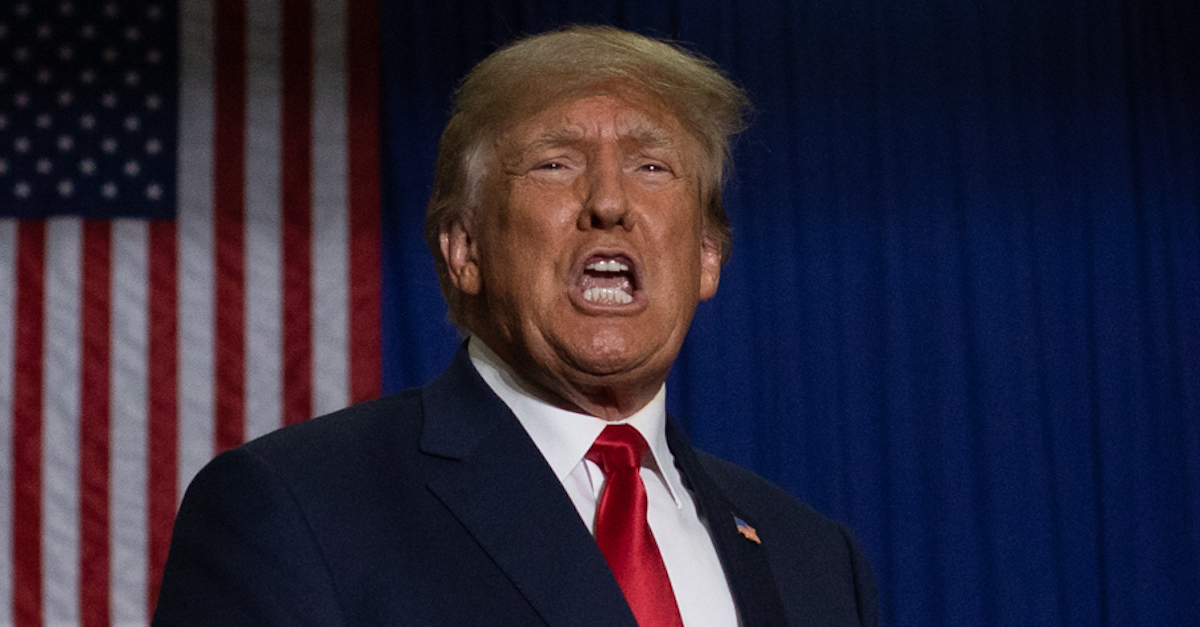 Former President Donald Trump followed through on public threats deemed “cartoonishly vexatious” by legal experts to wage a defamation lawsuit against the Pulitzer Prize Board.

The 2024 presidential hopeful filed a complaint on Tuesday in state court in Okeechobee County, Florida and requested more than $30,000 in damages as compensation for the Board’s award of the 2018 Pulitzer Prize to the New York Times and the Washington Post for their coverage of Trump’s campaign, the Steele Dossier, and the Mueller investigation into Russian interference with the 2016 election.

Trump, of course, has filed or threatened many, many, many defamation lawsuits, with media entities usually constituting his defendants of choice. Still, even with so much experience waging (and usually failing) with defamation litigation (or even a sprawling RICO action), Trump is undeterred.

The most recent Trump filing takes an unusual legal posture: that the Pulitzer Prize is so trusted an entity that its award implies truth in reporting — and that this implication alone is enough to constitute actionable defamation.

What does Trump’s lawsuit against the Pulitzer Board actually allege?

The 30-page complaint names not just the Pulitzer Prize Board, but also its individual members as defendants. Trump begins by providing background context of his presidential candidacy whereby he casts himself as a “disruptive political adversary” to existing government and media. He claims that the resulting media coverage “ginned up an absurdly false and defamatory narrative” regarding collusion with Vladimir Putin, at the core of which was the “Steele Dossier.”

Trump alleges that the Times and the Post led national coverage against him and “irrefutably lied” to the American people, who then fell for the “disgustingly fake narrative that Trump was a Russian asset.” The former president says that fueled by these false media reports, “partisan elements affiliated with the Clinton Campaign peddled their lies to malefactors within law enforcement,” which then “manipulated FISA court[s],” and fueled the “sham investigation” against him which culminated in the Mueller investigation.

Thanks to the Times‘ and Post’s coverage of these events, “A large swath of Americans had a tremendous misunderstanding of the truth,” according to Trump. Despite that, he claims, the two media giants were “rewarded for lying to the American public” with a joint award of the 2018 National Reporting Pulitzer Prize for their coverage the prior year.

Trump points to both the Pulitzer Prize Board’s selection of 20 articles central to its award, and to the Board’s statement about those articles:

For deeply sourced, relentlessly reported coverage in the public interest that drastically furthered the nation’s understanding of Russian interference in the 2016 presidential election and its connections to the Trump campaign, the president-elect’s transition team and his eventual administration.

The complaint goes on to attack the credibility of each article, disputing the reported facts, repeatedly accusing the Times and the Post of purposely misleading their readers, and arguing that “favored” figures (such as Hilary Clinton and Barack Obama) were treated to far more positive coverage by the biased sources.

All this, of course, relates to what the Times and the Post published — and not, as legal experts were quick to point out when Trump threatened this lawsuit— to anything the Pulitzer Prize Board said or published itself.

Defamation, of course, requires that a plaintiff be actually harmed by the defendant who published a false statement. To successfully withstand any level of judicial scrutiny, Trump would need to allege some specific wrongdoing by the Board itself.

What wrongdoing, exactly, does Trump attribute to the Pulitzer Prize Board itself?

Trump asserts that the Pulitzer Prize is the “pinnacle of American journalistic achievement” that is bestowed on only the most “well-deserving journalists,” and that its award “carries very important connotations.” It is precisely these “connotations” that make up the heart of Trump’s lawsuit against the Board.

Trump alleges that in awarding its 2018 Prize, the Pulitzer Board departed from its usual procedure and fast-tracked the two media entities to the award. By doing so, he contends, the Pulitzer Prize Board “signaled… it was acknowledging the Russia Collusion Hoax as the biggest story of 2017.”

Trump argues unequivocally: “there was no connection between the Trump campaign, the President-elect’s transition team, or the Trump administration, with any Russian attempts to interfere with the 2016 presidential election.” (emphasis Trump’s).

Trump does point to one specifically “defamatory statement” allegedly made by the defendant Board: the Board’s statement in response to Trump’s demand that it retract the 2018 Pulitzer Prize from the two media recipients.

Here is that statement, issued in July 2022:

The Pulitzer Prize Board has an established, formal process by which complaints against winning entries are carefully reviewed. In the last three years, the Pulitzer Board has received inquiries, including from former President Donald Trump, about submissions from The New York Times and The Washington Post on Russian interference in the U.S. election and its connections to the Trump campaign–submissions that jointly won the 2018 National Reporting prize.

These inquiries prompted the Pulitzer Board to commission two independent reviews of the work submitted by those organizations to our National Reporting competition. Both reviews were conducted by individuals with no connection to the institutions whose work was under examination, nor any connection to each other. The separate reviews converged in their conclusions: that no passages or headlines, contentions or assertions in any of the winning submissions were discredited by facts that emerged subsequent to the conferral of the prizes.

Trump argues that the Board issued this statement “with knowledge or reckless disregard for its falsity,” and that it left readers “with the intended false implication that the Awarded Articles had been objectively, thoroughly, and independently reviewed for veracity twice and that the separate conclusions had each accredited the accuracy on the Awarded Articles.”

The reference to “knowledge or reckless disregard” is Trump’s one nod to standard defamation law: an oblique acknowledgement that as a public figure (which Trump undoubtedly is), Trump would only be entitled to wage a lawsuit against a defendant that acted with “actual malice.”

At no point in Trump’s complaint does he refute the specific content of the Board’s statement, or allege that it purposely failed to verify the contents of its statement. He does not offer facts or argument that the Board’s reviews did not occur, or that they discredited the Times‘ or the Post‘s reporting. Rather, his argument is that the underlying reporting was false.

As for damages, Trump pleads that his “reputation, profession, and business has been damaged,” because the Board’s statement “wrongfully implies criminal, wrongful, and un-American conduct” on behalf of the former president and businessman. The actual damages, however, were not mentioned, and were simply promised “to be proven at trial.”

The lack of specificity or causation pleaded is a common misstep in defamation lawsuits, which require not only an argument that a defendant made a false statement of fact, but also that the wrongdoing was the direct cause of a victim’s economic harm.

Trump also includes this curious paragraph in his narrative:

While elements at the Times and the Post were almost certain complicit in the Russia Collusion Hoax, it is ultimately immaterial whether the authors of the Awarded Articles understood at the time they were propagating political disinformation manufactured by paid sources in an attempt to mislead the public and tarnish President Trump’s reputation and political prospects.

One of the most problematic aspects of Trump’s lawsuit against the Pulitzer Board is the defendants’ lack of proximity to the Times‘ or Post‘s reporting. Essentially, Trump is asking that a court impute false reporting by independent journalists onto an entity that rewarded that reporting. Tenuous as that argument may be, specific acknowledgement that the reporters’ knowledge of the truth of their own stories “is ultimately immaterial” throws a wrench into Trump’s already-flawed reasoning.

You can read the full complaint here.

Representatives for Donald Trump and the Pulitzer Prize Board did not immediately respond to request for comment.

The suit was filed by R. Quincy Bird and Jeremy D. Bailie of the St. Petersburg-based firm Weber, Crabb & Wein, PA. Both lawyers specialize in commercial litigation; the word “defamation” does not appear on either of their biographies on the law firm website.