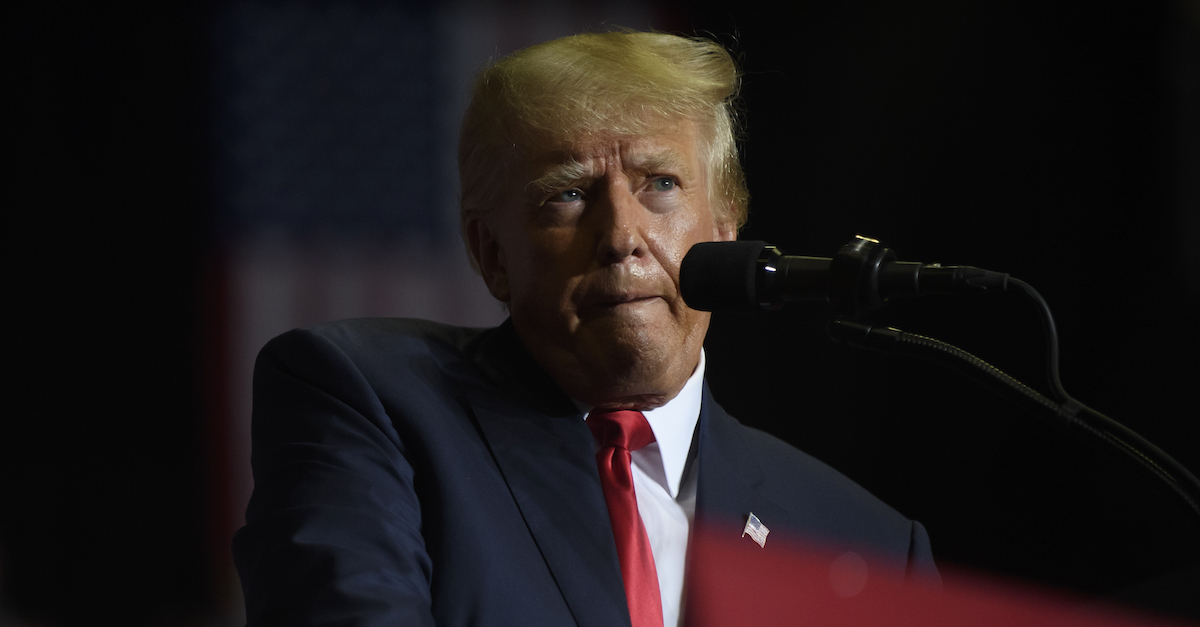 Former President Donald Trump speaks at a rally at the Covelli Centre on September 17, 2022 in Youngstown, Ohio.

Filed on Monday, the $475 million petition alleges various CNN anchors have “repeatedly” compared him to, and associated him with, “Adolf Hitler and Nazism” and have done so “with purported factual support,” that pulls their words beyond opinion and hyperbole.

Defamation law, at a basic level, requires a false statement of fact.

In some parts of the lawsuit, Trump’s attorneys echo aspects of defamation’s elements or requirements under the law. In a drastic departure with precedent, however, they assert the U.S. Supreme Court standard of “actual malice” should not apply in the 45th president’s case against the cable network founded by Ted Turner.

“Even though the actual malice standard is met here, in circumstances like these, the judicially-created policy of the ‘actual malice’ standard should not apply because ‘ideological homogeneity in the media—or in the channels of information distribution—risks repressing certain ideas from the public consciousness just as surely as if access were restricted by the government,’” the 29-page federal filing argues. “Suits like these do not throttle the First Amendment, they vindicate the First Amendment’s marketplace of ideas.”

Experts surveyed by Law&Crime said this was a strange and losing argument – but tried to make sense of it regardless.

First Amendment lawyer Floyd Abrams, who represented The New York Times in the famous Pentagon Papers cases, said the argument against applying actual malice was an invitation to the Roberts Court’s most conservative members to try and undo current defamation law. Such a reversion has been one of Trump’s most loudly-stated policy goals – since his 2016 presidential campaign at least.

“Any libel action by Donald trump will be subjected to the actual malice standard,” Abrams told Law&Crime in an email. “The complaint seems to be trying to lay the groundwork for trying to persuade the Supreme Court to abandon that standard (a position that three members of the Court have already indicated they would likely agree with.) My own view is that a fourth vote — what is needed to grant a writ of certiorari — is unlikely and that a ruling of the Court to overrule New York Times v. Sullivan is more unlikely, but possible.” (Abrams is the father of Law&Crime founder Dan Abrams.)

Trump’s complaint mainly focuses on those aforementioned Hitler and Nazi allusions as well as repeat references to the “Big Lie” concept made famous by Nazi propagandist Joseph Goebbels.

On the merits, and beyond speculating the long game, Abrams saw little chance for the lawsuit to yield dividends for Trump.

“In general and no matter what legal standard is applied, the claim seems to me highly unlikely to prevail,” the attorney added. “Most of what the complaint objects to is opinion and thus protected by the First Amendment. The objection to the use of language about ‘the big lie’ seems to me to be frivolous both because that is pure opinion and because it is true. And the objection to references to Hitler seems frivolous as well since broad protection for such speech about public figures is well-established.”

“The lawsuit is bizarre,” the famed scholar known to law students and law professors across the country – and presently the dean of the Berkeley School of Law – told Law&Crime in an email. “What was said was opinion and can’t be defamatory. And actual malice does apply to any defamation claim he brings.”

Roy Gutterman is the director of the Newhouse School’s Tully Center for Free Speech at Syracuse University. In an email, he recalled Trump’s history of losing defamation-related legal battles.

“As a plaintiff in defamation cases for decades, Donald Trump has had significant problems with the actual malice standard,” Gutterman told Law&Crime in an email. “Arguing that it should not apply to his case does not make a lot of sense under the law. As a former government official who was a major public figure before and after his government service, he is exactly the type of plaintiff the actual malice rule was designed to protect the media and critics of public officials from.”

Florida-based attorney and First Amendment expert Lawrence Walters offered a capsule explainer of the actual malice standard – and agreed Trump’s lawsuit was likely a test case aimed for the ears of specific members of the nation’s high court:

The actual malice standard that must be satisfied by public figures like former President Trump in defamation claims is an exceedingly high bar which protects robust debate in the marketplace of ideas, as required by the First Amendment. While not impossible to meet, defamation plaintiffs have often lost cases even where the statements at issue were factually untrue. This case may seek to test whether the Supreme Court will adhere to the actual malice standard. Justices Thomas and Gorsuch have urged the court to revisit this judicially-created doctrine given the recent changes in the Nation’s media landscape. Justice Thomas, in particular, seems poised to reconsider the actual malice standard given his dissent in Coral Ridge Ministries Media v. SPLC. However, the lower courts will be bound to apply the existing precedent which could potentially result in losses unless and until SCOTUS decides to review any adverse decision.

“Beyond trying to rally his base, this lawsuit may be trying to talk to one or two specific jurists who have recently expressed dissatisfaction with the actual malice rule,” Gutterman added – suggesting a trend. “Just when you think Donald Trump’s war against the media was taking a back seat, we now have this nearly half-billion dollar suit against CNN alleging defamation. It is absurd.”