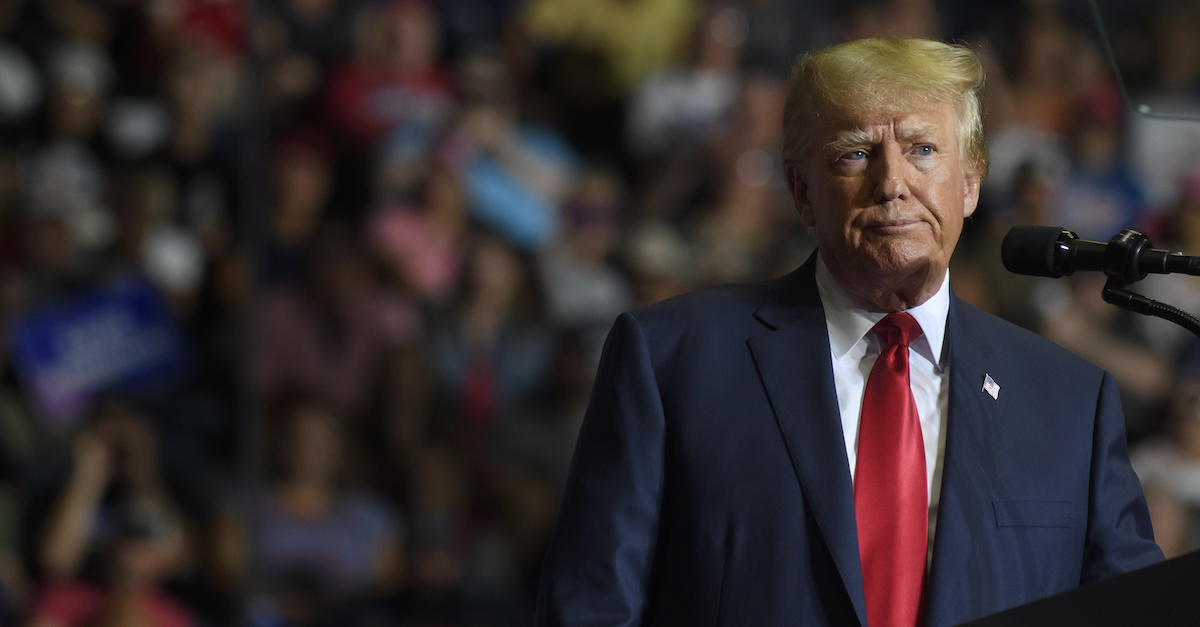 Former President Donald Trump speaks at a Save America Rally to support Republican candidates running for state and federal offices in the state at the Covelli Centre on Sept. 17, 2022 in Youngstown, Ohio. (Photo by Jeff Swensen/Getty Images)

“The application for an interim stay is denied pending determination of the motion by a full bench,” Justice Angela M. Mazzarelli wrote in a handwritten ruling for New York’s Appellate Division, First Department.

Mazzarelli ordered expedited consideration of a stay motion by a full appellate panel, before setting briefing dates for the parties.

The attorney general must file an opposition motion by Nov. 18. Trump’s deadline for a reply is Nov. 25.

The denial falls one day after Trump filed a notice of appeal seeking to overturn a preliminary injunction that his attorney Alina Habba described as “overly broad, overreaching, and unenforceable on its face.”

Issued by Manhattan Supreme Court Justice Arthur Engoron, the order blocked the former president from “selling, transferring, or otherwise disposing of any non-cash asset listed on the 2021 Statement of Financial Condition of Donald J. Trump, ‘without first providing 14 days written notice to [the Office of the Attorney General] and this Court.'”

Engoron issued it in response to a lawsuit filed by New York Attorney General Letitia James (D), who accused Trump, three of his adult children, and his business entities of fraudulently inflating or deflating assets to reap tax benefits. James investigated the case for years before filing the lawsuit, and that evidence hunt also took place before Engoron, who previously found in contempt of court for defiance of a subpoena.

Though no ruling has not yet been reached on the merits of the case, Justice Engoron fired a shot across the bow about his preliminary findings about what the evidence shows.

“In the absence of an injunction, and given defendants’ demonstrated propensity to engage in persistent fraud, failure to grant such an injunction could result in extreme prejudice to the people of New York,” the Nov. 3, 2022, order states. “Further, the relief sought is appropriately tailored to curbing unlawful conduct and ensuring that funds are available for potential disgorgement at the conclusion of this case.”

A representative for Trump’s lawyer did not immediately respond to an email requesting comment.

Along with the former president, his adult children Eric Trump, Donald Trump Jr., and Ivanka Trump are named as defendants. Trump and members of his family invoked their Fifth Amendment rights against self-incrimination repeatedly during their depositions in the case, which progressed concurrently with a criminal investigation by Manhattan District Attorney Alvin Bragg (D).

James assisted in the criminal probe, and Trump’s lawyers argued that deposition posed a Catch-22 for the former president: Failing to invoke his constitutional rights could have opened him to criminal exposure, and availing himself of those protections could have boomeranged against him in a civil lawsuit, Trump’s lawyers noted.

Indeed, his legal team’s fears came to pass: Engoron said he based his ruling, in part, on the “negative inference” drawn from Trump invoking his “Fifth Amendment right against self-incrimination more than 400 times” during a deposition.