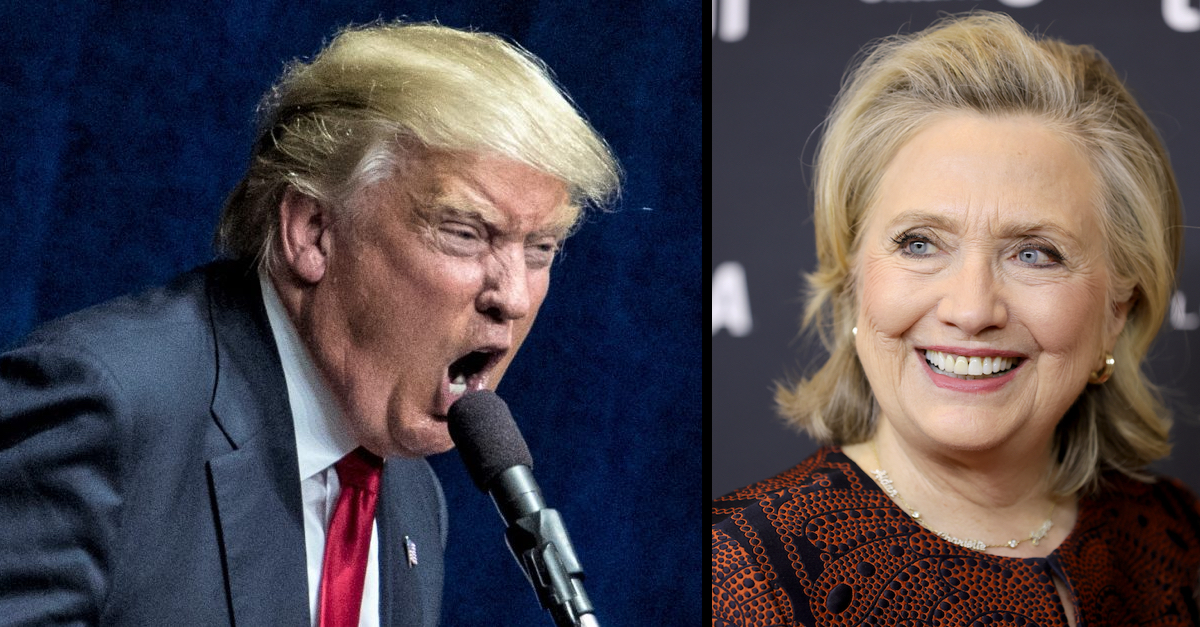 Donald Trump was captured in a bombastic pose on April 6, 2016, in Bethpage, N.Y. Hillary Clinton was seen on September 10, 2022 at the Toronto International Film Festival.

One of the many defendants named in Donald Trump’s racketeering lawsuit against Hillary Clinton has moved for sanctions against Trump and his attorneys in connection with the botched litigation.

U.S. District Judge Donald M. Middlebrooks dismissed the case “in its entirety” after the myriad defendants asked him to rubbish the proceeding. Middlebrooks concluded that a federal statute of limitations had long since closed on claims related to the 2016 election and because the case had little to no merit.

Trump’s attorneys said they would appeal the matter. Middlebrooks said he would retain jurisdiction should the dismissed defendants request sanctions — perhaps as a tip of the hat that he would be amenable to such requests.

Dolan’s name appeared in Trump’s original complaint as an alleged employee of the public relations firm Kglobal and as a “longtime participant in Democratic politics, having previously served as chairman of the DNC, state chairman of former President Bill Clinton’s 1992 and 1996 presidential campaigns, adviser to Clinton’s 2008 presidential campaign, and having been appointed by Clinton to two four-year terms on an advisory commission at the U.S. State Department.”

“With respect to the 2016 Clinton campaign, Dolan actively campaigned and participated in calls and events as a volunteer on behalf of the Clinton Campaign,” Trump’s attorneys asserted.

In a Wednesday memorandum in support of a motion for sanctions, Dolan said some of those facts were flat-out false.

“Defendant Charles Halliday Dolan, Jr has been dragged into this lawsuit via speculation, rumor and innuendo,” the filing suggests.  “Large and small matters are falsely and cavalierly presented in Plaintiff’s pleadings; any one of these false statements is grounds for sanction.”

The memorandum explained (we’ve omitted the citations to the record):

The new, Amended Complaint further complicates its prior error by now identifying Mr. Dolan for the first time as a citizen and resident of New York. This is a new allegation that is not true at all, and again could have been easily checked. Mr. Dolan lives and has lived for most of his adult life in Virginia. Mr. Dolan already submitted a declaration identifying himself as an Arlington, Virginia resident.

In their original complaint, Trump’s attorneys referenced Dolan as follows:

[T]he Steele Dossier was largely based upon information provided to Steele by his primary sub-source, Igor Danchenko, who was subsequently indicted for falsifying his claims. Even more damning, Danchenko had close ties to senior Clinton Campaign official, Charles Halliday Dolan, Jr., who knowingly provided false information to Danchenko, who relayed it to Steele, who reported it in the Steele Dossier and eagerly fed the deceptions to both the media and the FBI. This duplicitous arrangement existed for a singular self-serving purpose – to discredit Donald J. Trump and his campaign.

In late April 2016, Danchenko began having discussions with Dolan about a potential business collaboration between Orbis Ltd. and Kglobal to create a “dossier” to smear Donald J. Trump and to disseminate the false accusations to the media. Those discussions reflected that Danchenko and Dolan had exchanged information regarding each other’s backgrounds and professional activities, including Danchenko’s work for Orbis Ltd, and Steele[.]

Dolan used the sanctions memorandum to counter those allegations. He first asserted that he was not the “source of a rumor that Mr. Trump engaged in salacious sexual activity at a Moscow hotel.”

“This is also not true, and there is no basis for this rumor,” Dolan’s lawyers wrote.

Dolan admitted to a less titillating narrative: he said he “stayed in a Moscow hotel” and “relayed information based on public sources,” including Politico and Fox News, “about Paul Manafort’s resignation.”

None of that information, Dolan argued, was “related to the Plaintiff,” and what he did provide was “considered accurate by most media reports.”

“[T]hat does not make him the source of any rumor as to the Plaintiff’s sexual activities,” Dolan’s attorney’s reiterated.

Plus, rather than having been “intimately involved in the 2016 Clinton campaign” as Trump asserted, “Mr. Dolan’s involvement was limited to knocking on doors in New Hampshire as a volunteer,” his attorneys indicated.

“There is no evidence or allegation that he talked to any other defendant” during the period relevant to the Trump lawsuit “except Mr. Danchenko,” Dolan’s attorneys stressed (while citing Danchenko’s own indictment).

“Given this limited involvement, there is no basis to think that Mr. Dolan knew about any plot to bring false information to the FBI, even assuming that action might conceivably lead to a cognizable cause of action,” his attorneys posited. “If a plaintiff wants to file a large complaint dragging parties in from all over the world, Plaintiff needs to undertake at least minimal diligence to confirm its alternative facts.”

Dolan’s counsel then suggested that Trump’s sprawling RICO lawsuit was little more than an attempt to “settle political scores via the judicial system” by offering “conjecture and speculation to concoct various causes of actions.”

“But Plaintiff admits that his injury was political,” Dolan’s attorneys wrote, citing page 118 of Trump’s amended complaint. “Dealing with political issues is part and parcel of running for President and being President in the United States. Plaintiff does not get to sue for the rigors of a job he campaigned for.”

“Plaintiff fails to allege a particular agreement between Mr. Dolan and any of the Defendants tortiously to injure him or his presidency,” according to the memorandum. “Rather, he relies on an indictment of Mr. Danchenko that relays certain conversations and then fills in the gaps with conjecture and speculation, despite objective investigations and publicity that disprove Plaintiff’s claims.”

Due to the aforementioned errors, Dolan’s counsel is asking Judge Middlebrooks to award sanctions under Rule 11 of the Federal Rules of Civil Procedure. A separate document called a praecipe indicates the Rule 11 issue is ripe for adjudication. Additionally, Dolan’s attorneys say they may join a future request for sanctions under 28 U.S.C. § 1927.

The praecipe says Dolan has paid $2,045 on a total bill of $16,274.23.  Most of that time was furnished at the rate of $100 per hour by a group of highly seasoned attorneys. The rate is described in the document as a “low bono” rate. That’s a play on the phrase “pro bono,” which describes the provision of legal services for free.

The praecipe adds that the lawsuit prevented Dolan from “obtaining credit” and “led to a significant loss of consulting business.”

The memorandum in support of sanctions, the praecipe, and an exhibit containing bills issued by Dolan’s attorneys are all embedded below: