Citing ‘Well Settled’ Law, Judge Refuses to Recuse Himself from Trump’s RICO Lawsuit: ‘I Have Never Met or Spoken with Bill or Hillary Clinton’ 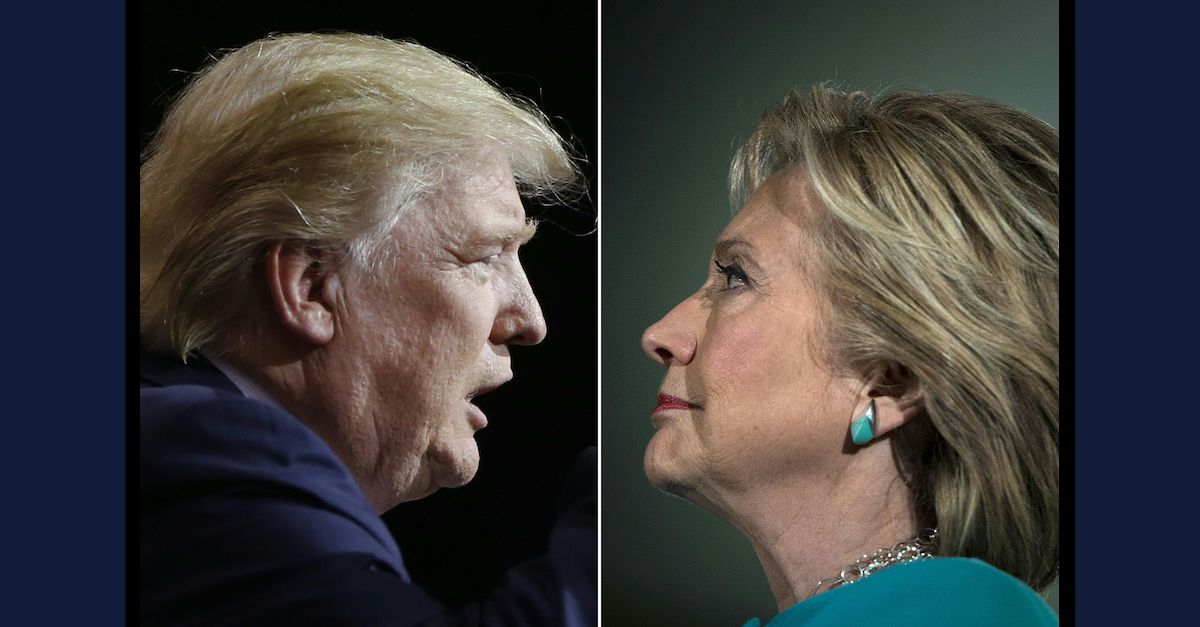 Donald Trump was photographed in Cleveland, Ohio on October 22, 2016; Hillary Clinton was in Manchester, New Hampshire, on November 6, 2016. (Images via Jay Laprete and Brendan Smialowski/AFP via Getty Images.)

Citing “well settled” statutes and case law, a federal judge in Florida has denied a request by Donald Trump to have a new judge assigned to a recently filed civil lawsuit against Hillary Clinton, the Democratic National Committee, the Democratic Party law firm Perkins Coie, that firm’s former partner Michael Sussmann, and others.

The Trump lawsuit alleges 16 separate counts, including RICO violations, for myriad events that irritated or inflamed Trump and his supporters during his candidacy and presidency. On Monday, Trump sought to have U.S. District Judge Donald M. Middlebrooks disqualified from hearing the case because former President Bill Clinton — Hillary Clinton’s husband — appointed Judge Middlebrooks to the bench some 25 years ago.

Judge Middlebrooks dismissed those concerns via a 5-page order on Wednesday evening.

“According to Plaintiff, the very fact of my appointment by Bill Clinton ‘amounts to prejudice so virulent or pervasive as to constitute bias against a party,'” Middlebrooks wrote. “Plaintiff also urges that disqualification is necessary because he ‘is unaware of the exact extent of the relationship between’ me and Defendant Hillary Clinton.”

Then came a footnote which cut straight to the heart of the political overtones at play:

“It is true that I was appointed to the bench by former President Bill Clinton,” the judge continued in his main analysis. “Although former President Clinton is not a party to this lawsuit, I will give Plaintiff the benefit of the doubt and equate the interests of the Clintons for the sake of analysis here.”

The following explains the judge’s carefully cited rationale for remaining on the case:

The law is well settled that appointment to the bench by a litigant, without more, will not “create in reasonable minds, with knowledge of all the relevant circumstances that a reasonable inquiry would disclose, a perception that [the judge’s] ability to carry out judicial responsibilities with integrity, impartiality, and competence [would be] impaired.” In re Executive Office of the President, 215 F.3d 25, 25 (D.C. Cir. 2000) (quoting Code of Conduct for United States Judges Canon 24 cmt., reprinting in 2 Administrative Office of the United States Courts, Guide to Judiciary Policies and Procedures, ch. 1 at 1-2, 1-3); see also Straw v. United States, 4 F.4th 1358, 1362 (Fed. Cir. 2021) (“There is no support whatsoever for the contention that a judge can be disqualified based simply on the identity of the President who appointed him.”); MacDraw, Inc. v. CIT Grp. Equip. Fin., Inc., 138 F.3d 33, 38 (2d Cir. 1998) (“Nor should one charge that a judge is not impartial solely because an attorney is embroiled in a controversy with the administration that appointed the judge. Judges generally have political backgrounds to one degree or another but must be presumed, absent more, to be impartial.”).

“Given this precedent, I am not disqualified from presiding, nor should I recuse on the basis of any appearance of partiality,” the judge concluded. He then pushed back against the three cases cited by Trump’s attorneys; those cases, the judge said, “do not appear to support” the plaintiff’s arguments.

In other words, according to the judge, Trump’s request for recusal was a tactical decision that is not supported by the law.

“To warrant recusal, something more must be involved than solely my appointment to the bench twenty-five years ago by the spouse of a litigant now before me,” the judge continued. “And the conclusory assertions in Plaintiff’s Motion do not supply any conceivable, additional grounds. I have never met or spoken with Bill or Hillary Clinton. Other than my appointment by Bill Clinton, I do not now have nor have I ever had any relationship with the Clintons.”

Again, the judge went to the case law: “Recusal cannot be based on unsupported, irrational or highly tenuous speculation.”

The judge then pondered whether any federal judge would be able to hear the lawsuit under the arguments and assertions advanced by Trump’s lawyers:

Moreover, I have considered whether the nature of this lawsuit—acutely politically charged as it is—might provide some additional cause to question my qualification to preside, but I see no impediment there either. Every federal judge is appointed by a president who is affiliated with a major political party, and therefore every federal judge could theoretically be viewed as beholden, to some extent or another. As judges, we must all transcend politics.

The judge summed up by, in essence, reasserting his pledge:

When I became a federal judge, I took an oath to “faithfully and impartially discharge and perform all duties . . . under the Constitution and laws of the United States.” 28 U.S.C. § 453. I have done so for the last twenty-five years, and this case will be no different.

The decision by Judge Middlebrooks to remain on the case came the same day U.S. Magistrate Judge Ryon M. McCabe recused from the matter for reasons not entirely clear; McCabe cited only the aforementioned federal recusal statute, 28 U.S.C. § 455, and internal operating procedures as his rationale. Magistrate Judge Bruce E. Reinhart will take over the magistrate’s duties in the case, according to the court docket.

Read the full order denying Trump’s motion for recusal below: