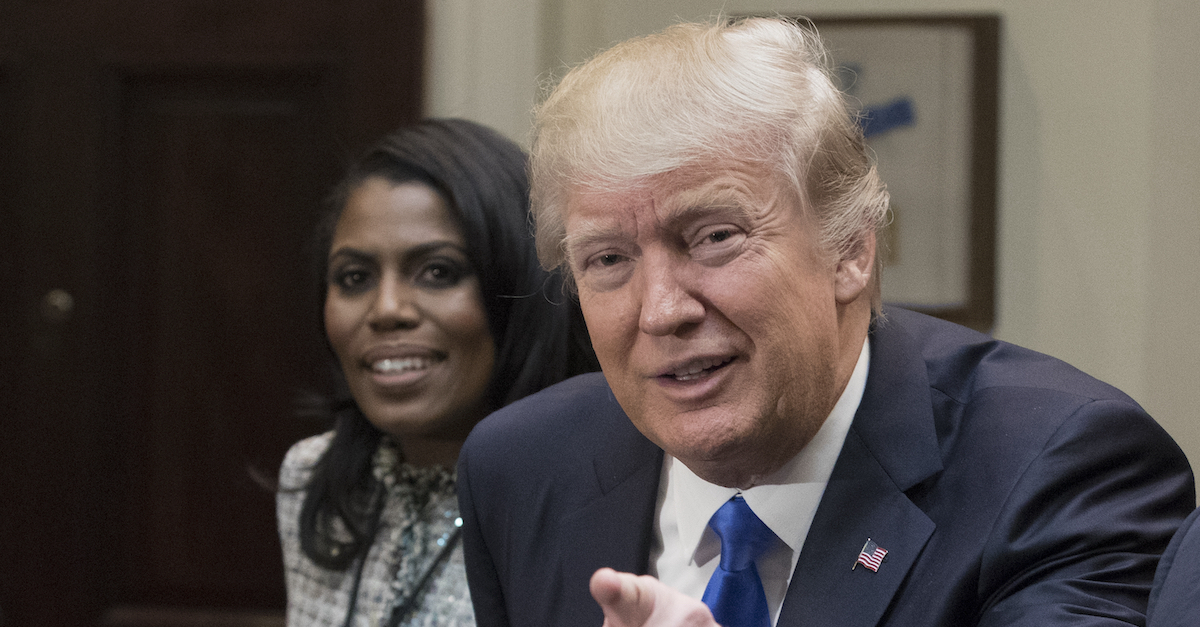 Director of Communications for the Office of Public Liaison Omarosa Manigault and then-President Donald Trump gathered with other officials in the Roosevelt Room of the White House on February 1, 2017 in Washington, D.C.

In what’s being described by her lawyer as the highest known award of its kind, an arbitrator has ordered former president Donald Trump‘s campaign to pay more than $1.3 million to Omarosa Manigault Newman to reimburse her for costs and attorney’s fees spent litigating the parameters of a nondisclosure agreement.

The massive payout is “the largest penalty we can find of record against a President, ex-President or Political Campaign,” said a press release from the office of lead Omarosa attorney John M. Phillips of Jacksonville, Fla.

The Trump campaign sued Omarosa over her book “Unhinged” and for comments made on the show “Celebrity Big Brother.”

The campaign said Omarosa’s comments were covered by a nondisclosure agreement; Omarosa attorneys argued that the NDA was “grossly overboard and illegal.”

One of the comments Omarosa made was the phrase “not my circus, not my monkeys” — which was a reference, her attorney said, to the Trump administration.

The case appeared settled after a hearing in 2020 resulted in the dismissal of the Trump campaign’s claims, but the campaign amended its case “to add hundreds of new claims,” Phillips said — a move he indicated was designed to punt the matter until after the election which Trump eventually lost.

A Trump expert claimed Omarosa needed to fund $1 million worth of Trump campaign commercials to “undo the damage she caused to his reputation,” Phillips recalled.

“We embarrassed their expert,” the defense lawyer said in a retort to that claim by the campaign.  “Not only did this bring in all of the other damage sources, but was tantamount to requesting an illegal campaign contribution. We found dozens of tweets by the Campaign’s expert disparaging Trump similarly. Their lawyer, Charles Harder, quit shortly after, to be replaced by Campaign lawyers.”

Eventually, in September 2021, an arbitrator with the American Arbitration Association granted Omarosa’s summary judgment motion to throw out the amended case under New York contract law.  The order failed to reach the First Amendment issues at play because the New York contract law decision dispatched with the matter.  (It is common for judges to refuse to decide constitutional issues if other legal mechanisms can more easily be employed to force a case one way or the other.)

Specifically, arbitrator T. Andrew Brown ruled that the campaign’s NDA vis-à-vis Omarosa was “highly problematic” because, in part, it contained “indefensibly vague and indefinite language regarding the protected entities.”  Those “entities” included “the Company, Mr. Trump, any Trump Company, any Family Member, or any Family Member Company or any asset any of the foregoing own, or product or service any of the foregoing offer.”

[T]her terms “Trump Company,” “Family Member,” and “Family Member Company,” are only vaguely defined in the Agreement.  “Family Member” names five children of Mr. Trump but does not otherwise specify who is included in the protected category.  No specific entity is named in the definitions of “Trump Company” and “Family Member Company.”  The Southern District of New York’s March 30, 2021 Order references that Mr. Trump is affiliated with more than 500 companies.  There is no way for Respondent to determine how many individuals or entities may be covered by the extremely broad scope of the Agreement . . . there is no objective standard set forth which could alert the Respondent as to whether she was in breach of the Agreement.

Omarosa had asked for $3,009,725 in fees and an additional $41,474.62 in costs, an arbitrator’s decision indicates.  The campaign responded that Omarosa’s attorneys “fail[ed] to submit detailed time records” and, therefore, that the request for fees and costs suffered a “fatal defect,” the arbitrator wrote.  However, the arbitrator determined that “principles of equity and fairness” outweighed the campaign’s arguments.

“Respondent was defending herself in a claim which was extensively litigated for more than three years, against an opponent who undoubtedly commanded far greater resources than did Respondent,” the arbitrator wrote.

“Respondent’s papers simply presented an unsupported statement that Respondent’s counsel and paralegal staff had spent 2,795 hours of billable attorney time and 685 hours of paralegal time on the matter and requested a fee of $3,009,725.00 based on that time,” the arbitrator continued later on in the document. “The Arbitrator could not rubber stamp such a staggering fee request upon such flimsy support, but further determined that the principles of equity and fairness discussed above did not allow for a summary rejection of the motion.”

Trump’s lawyers also tried to rubbish the request for cash money because of the way Omarosa’s lawyer allegedly behaved — a posture the arbitrator shot down with these words:

Claimant [the Trump Campaign] contends that counsel’s “rude, obnoxious, abusive, and condescending” behavior was so egregious that it should result in a total denial of fees. While at times Respondent’s [Omarosa’s] counsel’s tone and temperament pushed the boundaries, the Arbitrator fails to find that counsel’s conduct rose to the level of bad faith or unethical conduct. Litigation is necessarily adversarial and the Arbitrator does not fault Respondent’s counsel for vigorously advocating for his client.

The arbitrator arrived at the $1.3 million figure by applying what is known as the “lodestar approach” contemplated by New York law — that’s arrived at by “multiplying the number of billable hours that the prevailing party’s attorneys spend on the case by the hourly rate normally charged for similar work by attorneys of like skill in the area.”

Curative paperwork as to defense attorney Phillips helped the arbitrator arrive at the figure; however, paperwork for some co-counsel remained deficient, the document indicates.

Among the other reasons why the arbitrator refused to give Omarosa the full dollar amount requested was because of “a certain amount of inefficiency and overlap of time among the attorneys working on the case.”

The full cost breakdown is in the documents embedded below.

Despite the tit-for-tat, Phillips celebrated the ordered payout in a statement to Law&Crime:

The arbitrator awarded in excess of $1.3 million dollars in fees and costs based upon the prevailing party provision of the Trump Campaign’s overbroad non-disclosure agreement, bringing an end to Trump’s three year lawsuit against our client Omarosa Manigault Newman. It’s the largest known attorney fee award against a Political Campaign or President we can find and hopefully will send a message that weaponized litigation will not be tolerated and empower other lawyers to stand up and fight for the whistleblower and vocal critic against the oppressive machine. However, the $1.3 Million pales in comparison to the $3 to $4 million the Trump Campaign paid its own lawyers in order to suppress speech. That’s a lot of donations which went to lawyers in the name of politics. It’s truly shameful. We look forward to receiving a check and will donate a portion of the proceeds to groups who stand up to the suppression of speech.

The summary judgment order and the subsequent order on attorneys’ fees and costs are both below.