‘It’s Over’: Omarosa’s Attorney Celebrates as Trump NDA Ruled Unenforceable, Paving the Way for More Secrets to Be Spilled 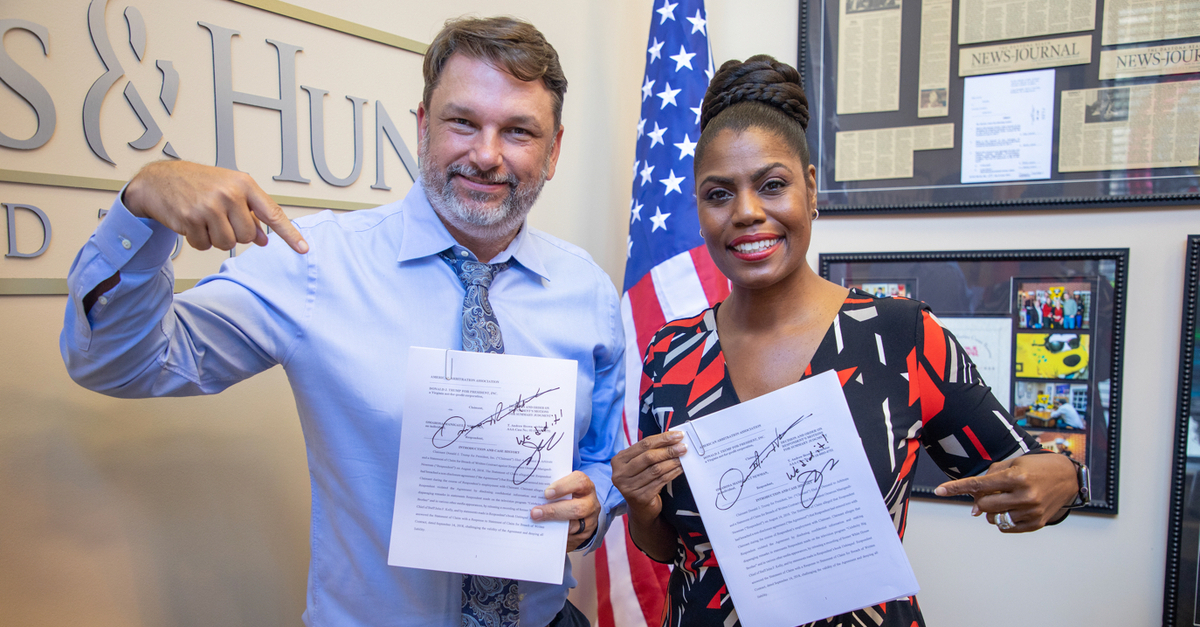 The decision by the American Arbitration Association is dated Sept. 24 but was released to the interested parties on Monday.

The ruling puts the kibosh on Trump campaign efforts to enforce a nondisclosure agreement against Manigault Newman after she penned Unhinged, a tell-all memoir about her scandal-ridden, tumultuous and brief stint in government. The campaign also objected to her releasing an audio file of then-White House chief of staff John Kelly and for making certain allegedly disparaging remarks about Trump himself during another T.V. show.

Trump’s campaign sought millions for those alleged violations of the NDA’s non-disparagement clause. Manigault Newman and her legal team fought back–seeking to have the arbitration lawsuit dismissed on summary judgment based on various legal grounds.

After several bouts, and, again, years worth, of excruciating legal wrangling during which Manigault Newman called foul, the confines of the conflict were limited to the comments made in the book.

Under the express terms of the arbitration agreement, both parties agreed to have the case dispensed using Empire State law.

“The New York Court of Appeals has held that in order for a contract to be formed, the terms that are agreed to must be clear and definite; if they are not, there is no binding contract,” Brown explained, couching his decision within the confines of New York State law.

The arbitrator noted, fatally for Trump, that while courts can fill in the gaps in certain instances, contract terms must be clear and definite in order for mutual assent (i.e. the creation of a contract) regarding those would-be terms. And here that simply was not the case.

“I find that the confidentiality provisions fail as vague and indefinite,” Brown wrote, before rubbishing various contractual terms from the failed NDA as insufficiently clear and definite.

Effectively, the arbitrator noted, certain terms were “so indefinite” that there was “no way” for Manigault Newman “to know what information should be kept confidential.”

The arbitrator went on to note that the statements made by Manigault Newman–the basis of the lawsuit–weren’t really confidential at all.

From the decision, at length:

[T]he statements contained therein are largely statements of Respondent’s personal opinion on the character of Mr. Trump and various of his family members, statements about her dealings with Mr. Trump prior to the time she worked on the campaign, and statements of her general recollection of conversations she had with various campaign officials. Given the general nature of many of these statements, it is hard to see how Respondent could have known that they would be considered “confidential information” under the terms of the Agreement. The statements do not disclose hard data such as internal polling results or donor financial information. Rather, they are for the most part simply expressions of unflattering opinions, which are deemed “confidential information” based solely upon the designation of Mr. Trump. This is exactly the kind of indefiniteness which New York courts do not allow to form the terms of a binding contract.

Florida-based attorney John M. Phillips, who represents Manigault Newman and who provided the arbitration decision to Law&Crime, was ecstatic about his client’s victory over the 45th president.

“We believe this is IT,” he said in an email. “As a lawyer, this was an unimaginable case–a United States President abusing the Constitution and Bill of Rights with outrageously unenforceable non-disclosure agreements. Since Omarosa came forward, and was sued, we’ve said this agreement was illegal and offensive. It took too long to finally get past the frivolous defenses, experts and lawyers like Charles Harder billing the Campaign millions of dollars while free speech was stigmatized.”

In loss, Trump’s campaign will now, as agreed upon in the original contract, have to pay “a judgment for reasonable legal fees and costs.”

“It’s over,” Phillips emphasized. “We’ve won in Donald Trump and the Trump Campaign’s chosen forum. They now owe attorney’s fees. Whether the Campaign tries to bankrupt out of this ruling or it energizes more people to come forward and blow the whistle on corrupt government, it’s a win we can all be proud of. People who signed these NDAs should sleep better and speak more freely. Kudos to Omarosa Manigault Newman for coming forward and taking this on.”

As Manigault Newman’s attorney suggested, the sea of extant Trump NDAs seem likely to meet a similar fate should they be challenged.

While arbitration decisions lack the power of precedent, their legal reasoning can be persuasive–and they rely on precedent regardless. In the present case, something like that occurred. Brown repeatedly made reference to a similarly-failed NDA against former Trump campaign aide, Jessica Denson.

Attorney Mark Zaid, a fulsome critic of Trump during (and after) his time in office, has previously written about the former president’s efforts to keep Manigault Newman quiet about her Trumpworld tour.

Zaid welcomed the decision in comments to Law&Crime.

“The rule of law has not surprisingly again struck down yet another attempt by former President Trump to enforce overbroad NDAs through aggressive efforts to intimidate former employees,” he said in an email. “Notably, we now learn that Trump withdrew all of his claims concerning Omarosa’s time in the White House as those were blatantly unconstitutional and frivolous. But now this legal battle finally concludes what those of us who had litigated against Trump’s NDAs knew all along: they were ‘vague and indefinite’ and therefore unenforceable.”

The attorney also weighed in on the not entirely unlike precedential value of the arbitration decision going forward.

“This decision, although it is not legal precedent elsewhere, can be read as a green light for others to consider publicly speaking out concerning the truth regarding what they know about Donald Trump.”