Lindsey Graham Once Again Urges SCOTUS to Throw a Wrench in Fulton County DA’s Election Probe, Claims He ‘Shall Not Be Questioned’ 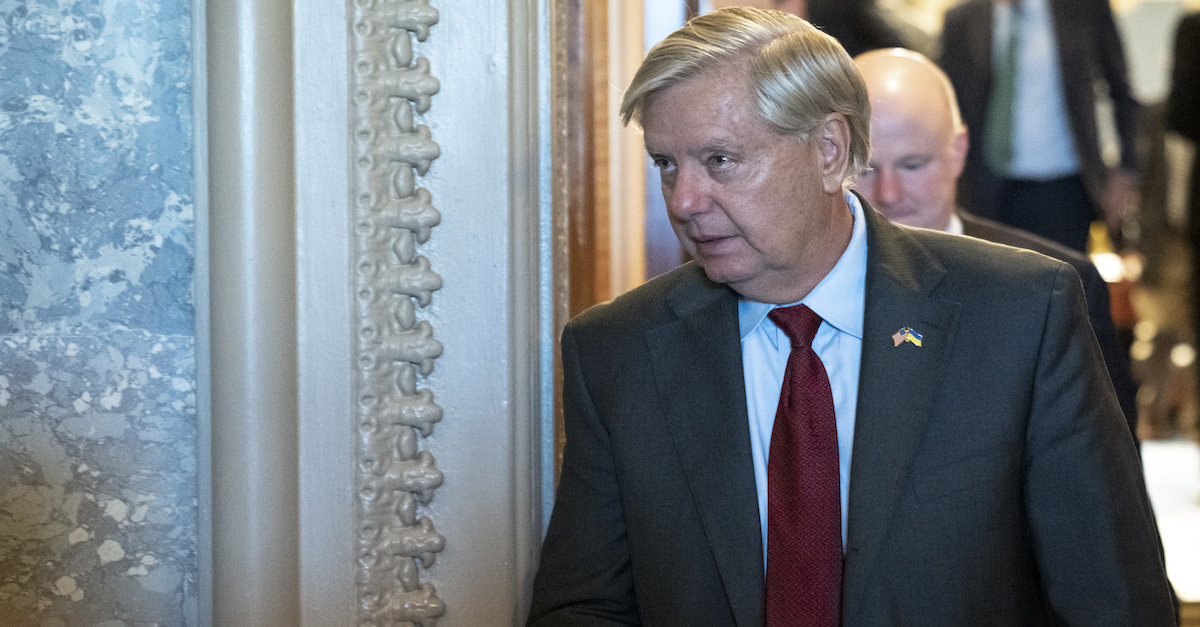 Attorneys for U.S. Sen. Lindsey Graham (R-S.C.) on Friday submitted a reply brief in a U.S. Supreme Court case which seeks to excuse him from testifying about his telephone calls surrounding the 2020 presidential election in Georgia.

“The importance of this case comes not so much in the underlying events — Senator Graham’s phone-call investigation into Georgia’s election process in the leadup to his vote under the Electoral Count Act certifying President Biden’s election,” the reply begins. “The importance comes instead in the separation-of-powers, federalism, and institutional interests that will be harmed without adjudication if the District Attorney’s state-court inquisition goes forward without the chance for full appellate review.”

The 23-page reply is the final document necessary for the Supreme Court to issue a ruling on the matter.

Graham filed the emergency application for a stay and injunction on Oct. 21. The matter is an appeal of two prior rulings:  a federal district court refused to pause Graham’s testimony in a probe by Fulton County, Georgia District Attorney Fani Willis (D) into attempts to subvert Georgia’s 2020 election result, and a federal appeals court gave what Graham’s attorneys called a “cursory acquiescence” to that district court ruling.

“Without a stay, Senator Lindsey Graham will soon be questioned by a local Georgia prosecutor and her ad hoc investigative body about his protected ‘Speech or Debate’ related to the 2020 election,” the original Oct. 21 application reads. “This will occur despite the Constitution’s command that Senators ‘shall not be questioned’ about ‘any Speech or Debate.’ U.S. Const. art. I, § 6, cl. 1. It will occur in state court, without the consent of the federal government. And it will undisputedly center on Senator Graham’s official acts — phone calls he made in the course of his official work, in the leadup to the critical vote under the Electoral Count Act.”

In the reply brief, Graham reiterated the argument that he “shall not be questioned”:

The questioning, though, is the irreparable harm. See DA Opp. 5 (conceding likelihood of irreparable harm must “assum[e] the correctness of the applicant’s position” on the merits). After all, the text of the Clause says that “Senators and Representatives … shall not be questioned in any other Place” about their Speech or Debate. U.S. Const. art. I, § 6, cl. 1. That text cannot reasonably be interpreted to allow the District Attorney to question Senator Graham for the purpose of determining whether the Constitution allows him to be questioned — effectively turning an express constitutional immunity into a question-by-question common-law privilege. Needless to say, then, the point of this emergency application is to prevent that questioning — questioning from which the Constitution immunizes Senator Graham.

Willis’ office responded on Thurs., Oct. 27, by asserting that Graham’s litigation is little more than a delay tactic that might stymie the entire grand jury process based on its schedule. The grand jury’s term expires in April 2023, Willis noted:

The Fulton County Special Purpose Grand Jury seeks to question Senator Lindsey Graham regarding certain activities related to its ongoing investigation into possible criminal activity surrounding the 2020 general elections in Georgia. After two unsuccessful attempts to persuade a court to enter a stay delaying his appearance before the Grand Jury, Senator Graham now asks Your Honor to postpone any questioning until after the ultimate resolution of any appeals to this Court. The Grand Jury maintains that the Senator’s arguments in favor of a stay demonstrate no significant likelihood of future success or even a grant of certiorari, and the delay resulting from a stay would be unavoidably harmful to the administration of its investigation. While the harm to the public’s interest in the timely and effective resolution of this investigation would be certain, Senator Graham faces no danger of harm should a stay be denied. The Eleventh Circuit has approved an orderly process of questioning proposed by the district court, wherein Senator Graham is immune from questioning regarding legislative activities and can resolve any future disputes under supervision of the federal courts. Despite Senator Graham’s attempts to portray himself and the future of the Speech or Debate Clause as imperiled by the prospect of his questioning, the record and the orders of the lower courts demonstrate that his arguments lack adequate factual or legal support to carry his heavy burden before Your Honor. With the framework for a logical and constitutionally-supported form of questioning already in place, the Special Purpose Grand Jury respectfully requests that Your Honor deny the Senator’s application and allow the Grand Jury to continue its investigation unhindered by unnecessary delay.

Willis specifically noted that Graham had “participated in at least two telephone calls with [Georgia] Secretary [of State Brad] Raffensperger in November of 2020.”

Again, according to Willis’ brief:

The Grand Jury was empaneled to investigate “facts and circumstances . . . relating directly or indirectly to possible attempts to disrupt the lawful administration of the 2020 elections in Georgia,” Willis’ office wrote.

Graham, according to Willis, made statements that contradicted Sterling and Raffensperger, thus necessitating testimony that would clear the air.

Graham’s initial filing noted that after Graham’s calls, the senator “voted under the Electoral Count Act to certify Joe Biden as President, explicitly listing the outcome of his investigation among the reasons for his vote.”

The reply brief continued to lean into what it described as “two neutral doctrines of constitutional law: Speech or Debate Clause immunity” and “and sovereign immunity” as reasons to shut down Graham’s requested testimony in Georgia.

On Monday, Justice Clarence Thomas agreed to grant Graham a temporary reprieve from testimony pending the reception of the full smattering of usual documents herein referenced. As noted, now that the documents have been submitted, the Supreme Court can act when it wishes on the matter.