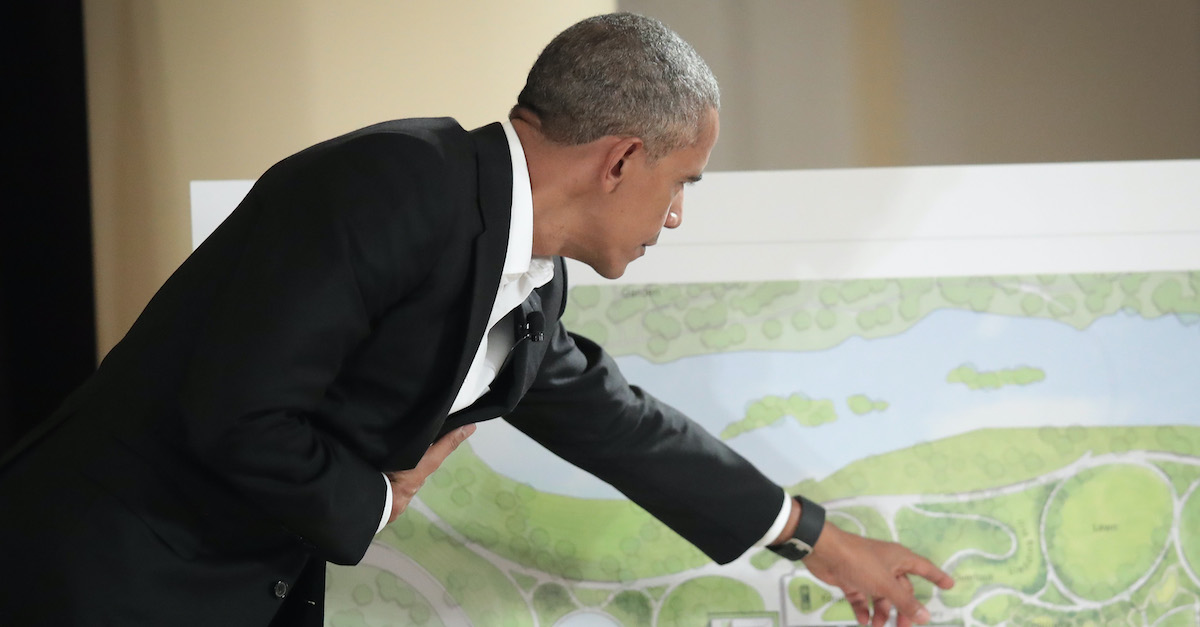 Former President Barack Obama points out features of the proposed Obama Presidential Center, which is scheduled to be built in nearby Jackson Park, during a gathering at the South Shore Cultural Center on May 3, 2017 in Chicago, Illinois. The Presidential Center design envisions three buildings, a museum, library and forum.

The day after former President Barack Obama’s foundation began breaking ground on a $700 million presidential center on an historic Chicago green space, Supreme Court Justice Amy Coney Barrett on Friday cleared the final hurdle that stood in the way of the opening stages of its construction.

“We greatly appreciate the continued support of our project and process by the courts, including now from the highest court in the land,” an Obama Foundation spokesperson wrote in a statement to Law&Crime. “With their support, and the outpouring of support we’ve received from so many on the South Side and across the city of Chicago, we were so pleased to be able to kick off our construction this past week and get us one day closer to doors opening at the Obama Presidential Center.”

Filed some three years ago, the legal challenge by the small Windy City group Protect Our Parks was never quite formidable. Barrett’s ruling upholds a lower court’s order that rejected the challenge as “not a difficult case.” The group has not, however, given up, announcing plans to pursue ongoing parallel litigation and a pending appeal on a separate issue.

The ex-president and former First Lady Michelle Obama announced the library project back in 2015, unveiling plans for a complex featuring three buildings, a museum, a library and a forum built on the South Side’s historic Jackson Park. The former president said the center would “attract the world to Chicago.”

Not all Chicago residents were grateful for the spotlight on their communities. Leaders for Protect Our Parks proposed moving the location from Jackson Park to a privately owned lot further southwest. Their attorney, Mark Roth, argued in 2019 that the city violated the public trust doctrine by effectively giving away nearly 20 acres of public land without evaluating other possible sites.

In 2019, U.S. District Judge John Robert Blakey rejected that proposition, finding the matter was not a close call.

“Even though this might be an important case, it’s not a difficult case,” Blakey said. “The park should [be] considered for what it is — a park and not a nature preserve.”

The U.S. Court of Appeals for the Seventh Circuit also rejected the group’s bid to block construction, leading Protect Our Parks to file an emergency petition for an injunction on Tuesday. The group argued that groundbreaking would “necessarily and irreparably demolish a Frederick Law Olmsted landscape park, including destruction of hundreds of trees and closure and destruction of its roadway systems, creating massive disruption from Northern Indiana to the Chicago Loop.”

On Thursday, two days after the petition was filed, the Obama Foundation announced construction had begun.

Justice Barrett, who served in the Seventh Circuit before she was appointed to the Supreme Court by ex-President Donald Trump, rejected the group’s last-ditch petition on Friday, without comment.

Even though construction is underway and unimpeded, Protect Our Parks signaled that their fight is not done.

“Today’s Supreme Court decision is disappointing, but not surprising,” their lawyer Michael Rachlis said in a statement. “We still believe that preserving the status quo is fundamental to preventing irreparable harm in Jackson Park. Nonetheless, our core arguments seek to protect the long-term environmental and historical resources in Jackson Park, and we look forward to presenting our evidence and these arguments in the appellate and district court in the coming weeks.”

They say their litigation is multi-pronged. The group says its main complaint has not yet been heard, and they plan to appeal a denial of a preliminary injunction to the Seventh Circuit.

Update—Aug. 20 at 2:05 p.m. Eastern Time: This story has been updated to include comment from Protect Our Parks.