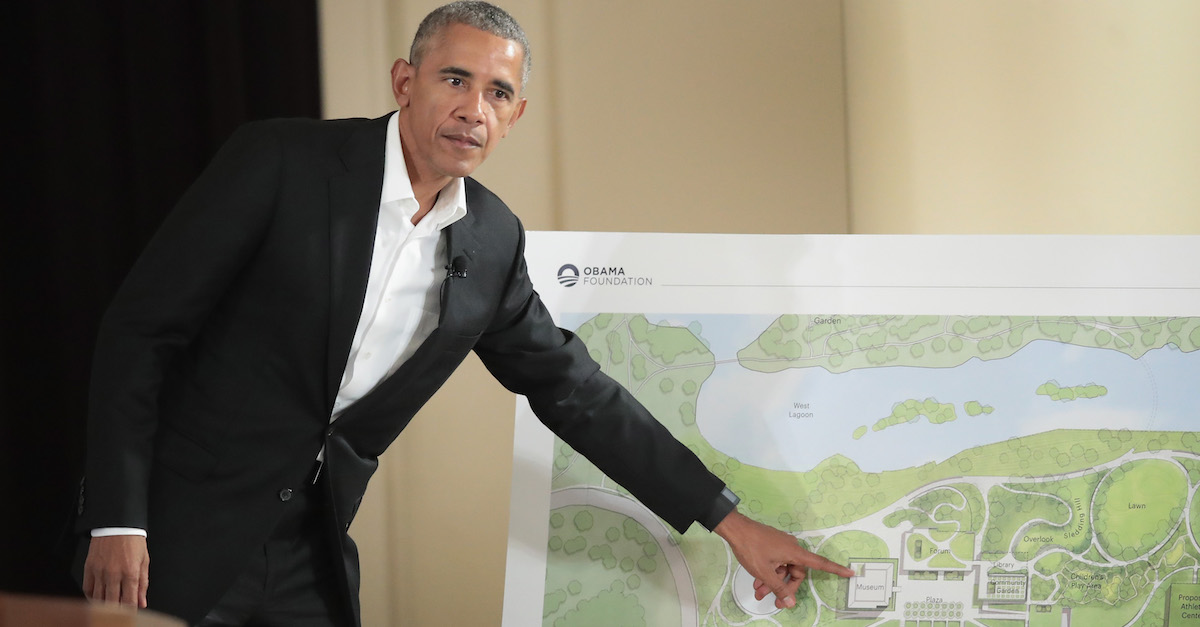 CHICAGO, IL – MAY 03: Former President Barack Obama points out features of the proposed Obama Presidential Center, which is scheduled to be built in nearby Jackson Park, during a gathering at the South Shore Cultural Center on May 3, 2017.

A federal judge on Tuesday threw out a lawsuit blocking construction on the Barack Obama Presidential Center in Jackson Park, which is located in Chicago, Illinois.

U.S. District Judge John Robert Blakey dismissed the 2018 lawsuit brought by Protect Our Parks and other environmental advocacy groups that claimed the city of Chicago and its park district could not legally transfer 20 acres of public land in Jackson Park to a private entity.

Leaders for Protect Our Parks requested the location of the center be moved from Jackson Park to a privately owned lot further southwest. The group’s attorney, Mark Roth, argued that the city violated the public trust doctrine by effectively giving away nearly 20 acres of public land without evaluating other possible sites.

The city contended that Protect Our Parks’s argument was based on a misguided understanding of the public trust doctrine, claiming that the Presidential Center itself constituted a public benefit.

Due to the high-profile nature of the case, spectators filled the courtroom to capacity for Tuesday’s closing arguments, according to the Chicago Tribune. After giving each side approximately one hour to argue their case, Blakey announced his reasoning on the case.

“Both sides have been given an opportunity to have a full and fair hearing,” he said. “I have not permitted needless delay. I have asked the parties to work with expediency and they have done so.”

“Even though this might be an important case, it’s not a difficult case. The park should [be] considered for what it is — a park and not a nature preserve,” he concluded.

Charles Birnbaum of the Cultural Landscape Foundation, an official consulting party in the federal review process, told Curbed Chicago that his group will continue fighting the decision as well.

“Today’s ruling, while disappointing, is by no means the final word,” he said. “Though the carefully orchestrated local approvals process has been enabled by pliant municipal officials, there are still federal-level reviews underway for this nationally significant work of landscape architecture that is listed in the National Register of Historic Places.”

The $500 million project, which was originally scheduled to break ground last year for a projected 2021 opening, will still be delayed until the completion of a federal historic review that is currently in progress.