Breyer, Kavanaugh, Kennedy and RBG: Everyone Is Talking About the Supreme Court 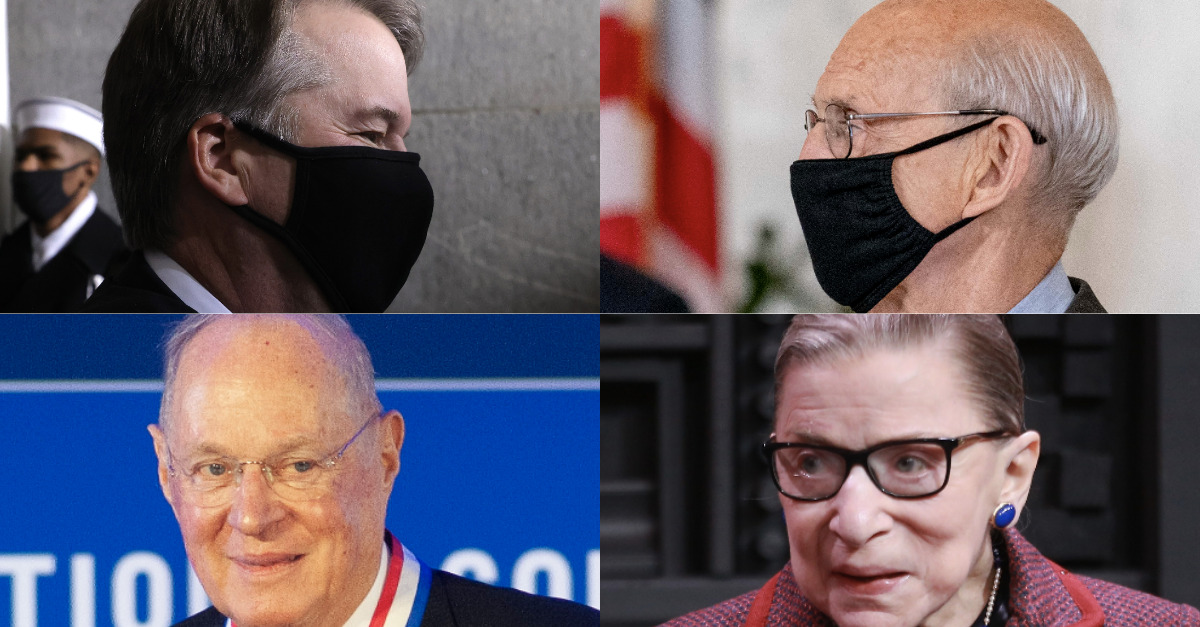 Several current and former members of the Supreme Court of the United States were the topic of trending conversations on Twitter throughout Tuesday. Here’s a brief explanation of what the online hubbub was all about.

Supreme Court discussions are permanent features of the micro-blogging website where takes are tossed blithely into the ether, but the broader U.S. news ecosystem is also occasionally focused on high court goings-on as well. On Monday, The New York Times ran an opinion piece by University of Colorado Boulder Law Professor Paul F. Campos arguing that Justice Stephen Breyer should retire immediately. It was ably yet predictably titled “Justice Breyer Should Retire Right Now.”

The upshot of the argument was simple: Democrats only control the U.S. Senate with an “extremely thin” margin—Vice President Kamala Harris is the tie-breaking vote—and there are 18 members of the Democratic Senate Caucus (which includes independent Senators Bernie Sanders (I-Vt.) and Angus King (I-Maine) who are over the age of 70. Several occupy states currently helmed by Republican governors. In sum, the caucus is old, and if and when a member does die, a GOP governor would be able to quickly claim their seat(s) for the Republican Party.

Such a senatorial death leading to a vacancy leading to a GOP replacement would swiftly deal Democrats an all-but insurmountable obstacle in the way of getting much of anything done under President Joe Biden—especially appointing a new Supreme Court justice.

Campos’s arguably cold but decidedly realpolitik entreaty for Breyer to shed his deep, black robes is a reoccurring criticism in left-of-center court-watching circles and not particularly newsworthy except, maybe, for the fact that the Times published it.

But Harvard Law Professor Noah Feldman apparently got the Campos argument—and/or maybe the months of online chatter—stuck in his craw. On Tuesday, Bloomberg published his implicit rebuke under the title: “Stop Telling Stephen Breyer to Retire.”

Feldman’s column immediately required a relevant correction. The Harvard Law professor originally thought the liberal justice was “a (healthy) 81.” and the subheadline reflected that estimate of the jurist’s age as well. Breyer is, in fact, 82 years old.

The gist of Feldman’s piece is that pressuring Breyer to retire based on partisan considerations is only likely to repel him from retiring any time soon. The professor agreed that it was probably time for him to go and agreed Democrats are in a perilous position, but argued every “prominent” request for a pre-death exit “traps Breyer into having to stay out so as not to appear to be acting as a partisan.”

With barrels loaded on both sides of the largely internecine issue, Twitter users had at it, with most falling into Campos’s corner.

There are 16 Democratic senators over 70 years old. The day any of them, uh, stop being senators, the Democrats lose their majority.

Stephen Breyer, what are you doing man?

Dan Riffle, a former senior counsel and policy adviser to Rep. Alexandria Ocasio-Cortez (D-N.Y.) who also previously worked with late representative John Conyers and Minnesota Attorney General Keith Ellison (DFL-Minn.), is emblematic of the retire-now contingent (and most of the Breyer sentiment overall.)

Most Democrats, from most of the party’s factions, are in agreement on this issue. It is an article of faith that Breyer needs to go and not repeat the mistake made by his former, longtime colleague Ruth Bader Ginsburg, who was pushed by the Obama White House to retire when the 44th president had control of the Senate—but who instead embraced the “Notorious RBG” moniker and mounted a media campaign to burnish her public image and institutional standing, beating back the Obama clique’s (and broader liberal legal community’s) calls to call it quits.

“Justice Ruth Bader Ginsburg was widely, and deservedly, criticized for her refusal to retire from the Supreme Court at a time when a Democratic president could have chosen her replacement,” Campos wrote as the introductory paragraph for his pro-retirement piece on Breyer, directly addressing the parallels—which were also repeatedly noted by numerous Twitter users on Tuesday.

Dems looked at what happened with RBG and said “let’s do that again” pic.twitter.com/st7kpm5wYj

The psychology of pubilcly saying a Justice should step down is way more complicated than it should be.

I used to blame Obama a little bit for this one, but that story came out over summer how Obama met with RBG in 2013 and was like “hint hint, please step down.”

If Breyer doesn’t step down and gets replaced by a Con, he also gets to be remembered as a selfish egomaniac https://t.co/YGGqMrcqUY

Others, of course, were still simply wishing happy, belated, would-be birthdays to the late feminist icon:

We honor her legacy by continuing to voice our dissent.

The stakes for the long term trajectory of the Supreme Court couldn’t be higher. And Democrats have been serially defeated in their efforts to reshape the court since then. Then-Senate Majority Leader Mitch McConnell (R-Ky.) refused to even consider then-judge and since-appointed Attorney General Merrick Garland as a replacement for legendary and late justice Antonin Scalia in 2016. That seat, of course, was ultimately filled by Justice Neil Gorsuch.

But Democrats telegraphed to their base and donors that they were on the cusp of denying former president Donald Trump his second preferred member when Christine Blasey Ford’s and Deborah Ramirez’s sexual assault and misconduct allegations against Brett Kavanaugh upended the conversation about who would replace retiring justice Anthony Kennedy in late 2018.

Famously, then-Senator Jeff Flake, a Republican, said his vote to move forward with Kavanaugh’s nomination was conditional on the FBI doing an investigation into Blasey Ford’s allegation. The Ramirez allegation was not, in any real sense, ever on the Senate’s radar—and not at all part of what the FBI looked into. The hastily concluded and limited FBI investigation turned up nothing new. Flake and otherwise reticent GOP members of the Senate easily had their consciences cleared, and Kavanaugh was confirmed by the smallest margin since 1881.

Friends and allies of Blasey Ford had, at the time, protested that the FBI ignored their corroborating accounts. Her attorney, Debra Katz, rubbished the notion that a genuine investigation could be conducted with “artificial limits as to time or scope.” But limits were imposed nonetheless. Many Democrats privately and publicly assumed that the fix was in from the jump—that the FBI under Trump was simply doing a pro forma “investigation” in name only.

Those suspicions were raised once again on Tuesday when Sen. Sheldon Whitehouse (D-R.I.) penned an open letter to Attorney General Garland asking for investigation into the FBI’s allegedly whitewashed investigation. Chief among the complaints lodged by the former prosecutor to the nation’s top prosecutor were those aforementioned concerns from witnesses that the FBI wholly ignored their evidence.

“This was unique behavior in my experience, as the Bureau is usually amenable to information and evidence; but in this matter the shutters were closed, the drawbridge drawn up, and there was no point of entry by which members of the public or Congress could provide information to the FBI,” the Rhode Island Democrat wrote.

And from one shady spot to another, the online discourse didn’t have too far to travel.

Kennedy’s decision to retire was abrupt and unexpected. Rumors have long circulated as to whether and what deals might have been cut between the infamously showy swing justice who loved to lord over the court’s jurisprudence—what on earth might have prompted him to secure an early exit.

Whitehouse’s Kavanaugh investigation investigation demand was a short line to dredging up Kennedy’s role in his successor’s ignominious route to a lifetime seat on the highest court in the land.

Of course, for now, it’s all just speculation (some of it of a familiar kind):

NOW We need to know who paid off all of Kavanaugh’s debts & why Justice Kennedy retired suddenly?https://t.co/BAr6WrS7Ux

Keep up the drum beat: Why did Justice Kennedy retire so abruptly? What role did his son at Deutsche Bank play? Who paid off Brett Kavanaugh’s $92,000 country club fees plus his $200,000 credit card debt plus his $1.2 million mortgage, and purchased themselves a SCOTUS seat?

On day Kavanaugh took his place:

We need to know if Justice Kennedy resigned prematurely to secure pardons for his sons. The one who loaned Trump $ from Deutsche Bank and the one who worked for Cambridge Analytica. Bartering pardons is a serious felony and impeachable offense.