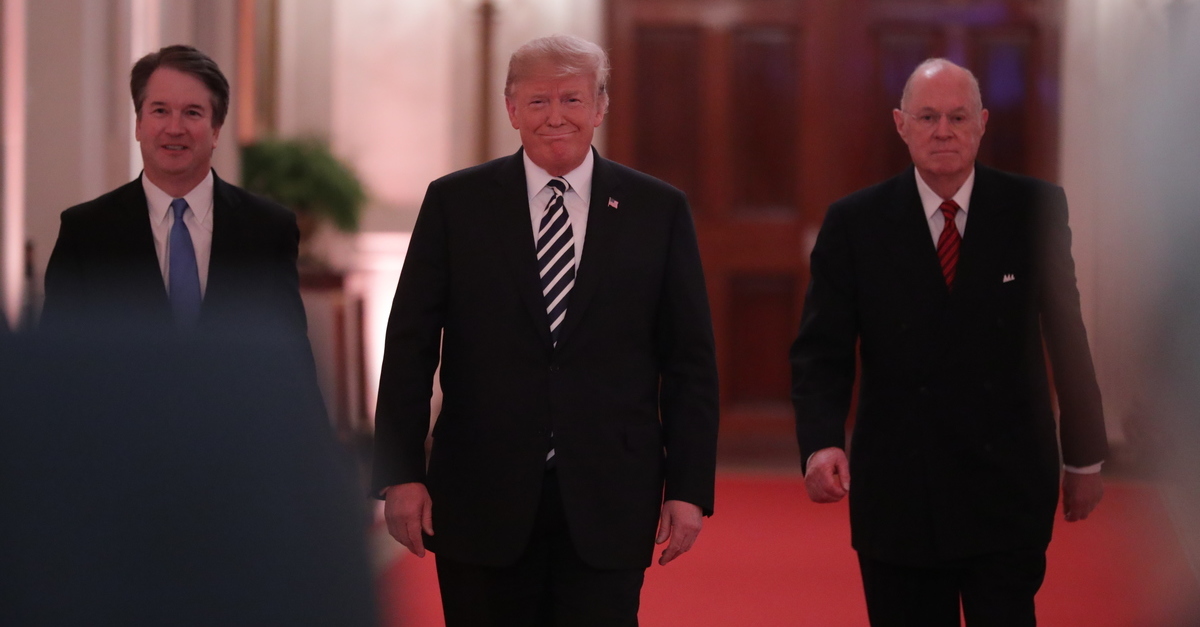 Former Supreme Court justice Anthony Kennedy‘s semi-moderate legacy is being called into question as critics and historians assess and reassess his role in elevating Brett Kavanaugh to the nation’s high court. Some even went so far as to suggest the decisions from Kennedy’s latter days on the bench were tainted.

As Law&Crime previously reported, Kennedy’s support for Kavanaugh was both direct and pivotal–in at least two ways–but it came well before Kavanaugh was nominated, accused of sexual assault, and confirmed to the Supreme Court.

Robert Barnes previewed the book by describing a suspicious scene in which Kennedy’s son allegedly met with Kellyanne Conway during a dinner just days after President Donald Trump was inaugurated in order to presumably set the Kavanaugh scheme into motion:

No one was happier about the outcome of the election than his father, Gregory Kennedy said, according to the book. Anthony Kennedy had been nominated by President Ronald Reagan in 1987, and Marcus writes he wanted to be replaced by another Republican.

“That’s good to know,” Conway replied, according to the book. “That happiness has consequences.” (In a footnote, Marcus says that Gregory Kennedy denied in an email this summer that he talked to Conway that night about his father.)

The official ask apparently came in April 2017–immediately after Justice Neil Gorsuch‘s swearing-in ceremony–when Kennedy “requested a private moment with President Trump to deliver a message about the next Supreme Court opening” and “told Trump he should consider another of his former clerks, Brett M. Kavanaugh, who was not on the president’s first two lists of candidates.”

Kennedy’s intervention in the nominating process now reads like something of a fait accompli; his resignation was framed as being premised on the selection of Kavanaugh filling the empty chair. Whether that understanding is technically and 100% accurate will be an increasingly relevant and politically-loaded question for historiographers and lawmakers in the years to come.

But the news contained in Marcus’s book is enough to keep that narrative in contention for the immediate and foreseeable future.

And it’s not being viewed in the greatest of lights.

And Kalhan’s criticism wasn’t limited to hashtag-coded outrage. He also called into question the legitimacy of Kennedy’s rulings during his final year on the bench.

“Kennedy made his request in April 2017,” Kalhan noted in a subsequent tweet. “He then proceeded to adjudicate cases involving major Trump priorities—like the #MuslimBan case—knowing Trump was weighing a decision about one of Kennedy’s own personal priorities while those cases were pending.”

Fordham Law Professor Jed Shugerman, who made a point to disavow traditional court-packing, elaborated on the idea.

“Outrageous,” he tweeted. “I’m not endorsing court-packing. But let’s recognize that Justice Kennedy engaged in a fundamentally illegitimate form of personal politics if he implicitly used retirement as leverage to handpick a buddy/former clerk.”

“I meant to say: Kennedy engaged in a fundamentally MORE illegitimate form of court-packing,” Shugerman amended. “If not court-packing, a more judicial solution might be to give the Roberts Court decisions no stare decisis weight for decisions after Oct 2018.”

In an email to Law&Crime, left-wing judicial advocacy group Take Back the Court’s Director Aaron Belkin claimed at length that Kennedy’s Kavanaugh recommendation and/or negotiation of “his chosen successor” was “corrupt”:

Does it really surprise anyone to learn of yet another corrupt connection between the GOP and the Court’s conservative majority? In 2016 the Chief Justice, who ostensibly cares so much about the Court’s legitimacy, stood by passively as Sen. [Mitch] McConnell stole it.

Earlier this year, Justice [Clarence] Thomas‘s wife lobbied the President about a lawsuit that was before the Court, and to which Trump was a party. This month, Justices Kavanaugh and [Samuel] Alito held a closed-door meeting with a homophobic party to a lawsuit. Now, we learn that a sitting Supreme Court justice used the leverage created by his lifetime appointment to negotiate his chosen successor, which is remarkably corrupt even by the laughable standards of this Court.

According to the group’s website, Take Back the Court is one of the leading groups arguing for expanding the number of Supreme Court justices “to nullify the stolen and illegitimate seats alongside other critical pro-democracy measures like restoring the right to vote and ensuring that all Americans are represented in Congress.”