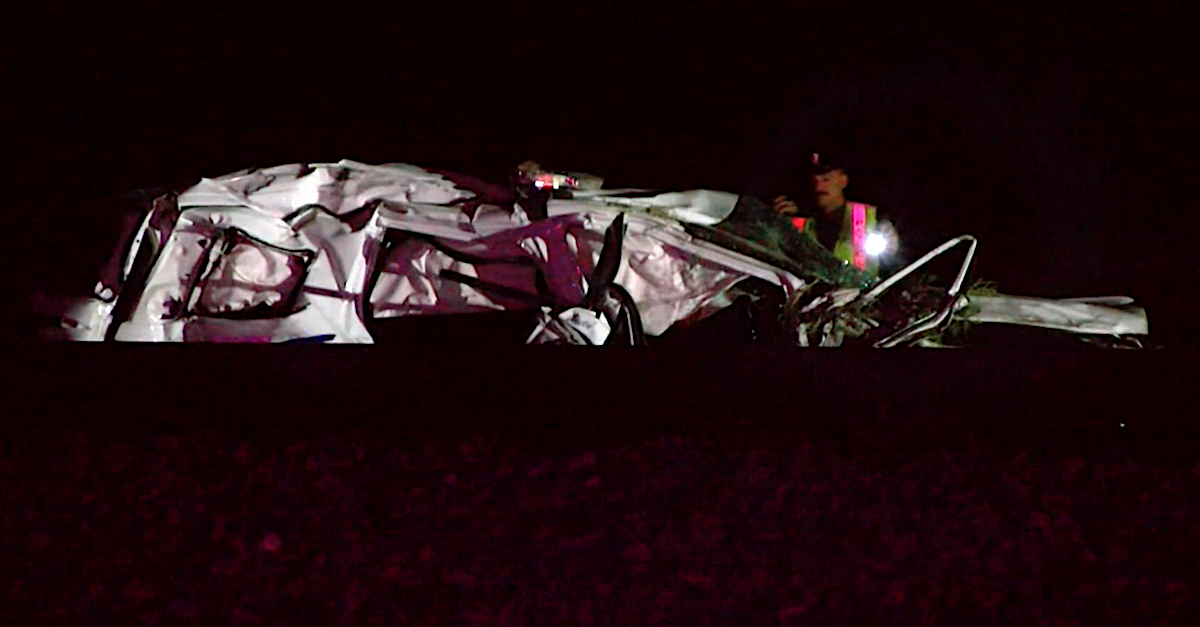 An officer inspects a severely damaged vehicle at a railroad crossing where a squad car containing a detainee was struck by a freight train. (Image via KUSA-TV screengrab.)

A Platteville, Colorado police officer has reportedly been placed on leave after stopping a squad car on railroad tracks, putting a detainee inside, and leaving the car and the detainee to be subsequently struck by a freight train.

The detainee, who has since been identified as 20-year-old Yareni Rios-Gonzalez of Greeley, was in serious condition as of Sunday. Denver FOX affiliate KDVR reported that she is expected to survive.

The Denver Post reported that Platteville Police Chief Carl Dwyer “didn’t divulge the name of the officer who was placed on paid leave” and “declined to answer other questions about the incident.”

Denver NBC affiliate KUSA said Rios-Gonzalez was believed to have been involved in a road rage incident in Fort Lupton.

Citing “police radio traffic,” KUSA said a 911 caller claimed a woman in a silver Toyota Tundra truck was tailgating the caller’s vehicle and had “pulled a gun.”

Local officers in Fort Lupton and sheriff’s deputies in Weld County searched for the truck, which was said to have been heading north on U.S. Highway 85, KUSA reported.  A Platteville officer said he saw what he believed to be the truck and pulled it over in the vicinity of U.S. 85 and County Road 38.

“The driver of the vehicle pulled to a stop just past the railroad tracks, with the patrol officer behind the car on the tracks,” the Colorado Bureau of Investigation (CBI) said in a statement obtained by Law&Crime.

Radio chatter obtained by KUSA suggested that officers held the suspect “at gunpoint.”

“Two Ft. Lupton officers arrived on the scene and the team conducted a high-risk traffic stop and detained a lone female occupant (age 20, Greeley) placing her in the back of the Platteville patrol car detained on suspicion of felony menacing,” the CBI statement continued.  “While the officers cleared the suspect vehicle as part of the investigation, a train traveling northbound struck the PPD patrol car.”

The collision resulted in a frantic call by one officer on the scene, according to KUSA’s retelling of the radio chatter.

“Dispatch, Lupton 346: patrol car was just hit by a train,” the officer said.

“Dispatch, Lupton 346: get medical emergent [sic],” that same officer — who was not the officer whose squad car contained the suspect — continued.  “The suspect was in the vehicle that was hit by the train.”

Then the officer whose car was apparently totaled chimed in.

“Just advising: we can’t get the doors open on the unit, and the female passenger is inside my unit,” that officer said.

KUSA’s video of the scene showed a stereotypically narrow rural road with no center line and dirt shoulders. The crossing was guarded by red stop signs and by black and white “crossbuck” railroad crossing signs.

Markings on the pavement and an adjacent stop sign attached to a “CR 38” highway sign, however, suggest that the span between the tracks and Highway 85 is quite short. 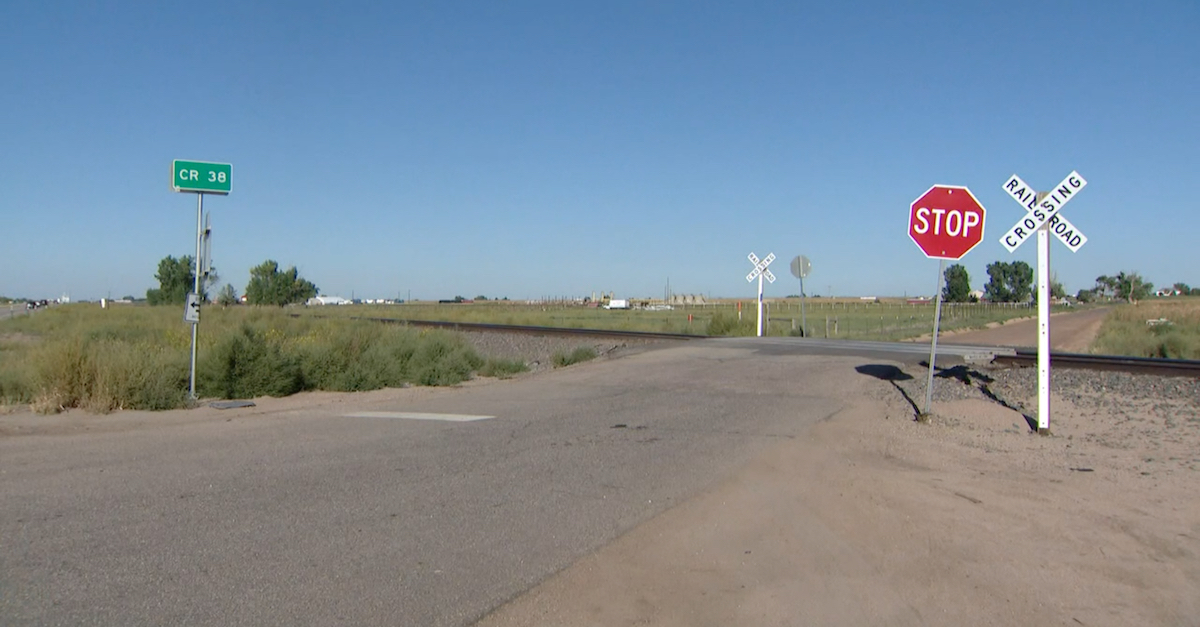 A Platteville, Colorado squad car was struck by a freight train at this crossing with a detainee inside. (Image via KUSA-TV screengrab.)

The CBI said the woman inside sustained “serious bodily injuries.”

The CBI is investigating Rios-Gonzalez’s injuries, the Fort Lupton Police Department is looking into what led to the initial 911 call, and the Colorado State Patrol is handling the “serious-injury traffic accident” which resulted from the train hitting the car, the CBI said.

A California-based expert in police tactics told KUSA that he “can’t fathom” why the officer left his squad car on the tracks.

“Why didn’t you move the vehicle off the tracks?” asked Ed Obayashi, a California sheriff deputy, in rhetorical fashion for the latter television station’s follow-up report on the incident.  “That’s going to be the biggest question.”

Obayashi, according to KUSA, said the officer should have ordered the suspect vehicle to move forward so that his squad car could clear the crossing.

“Those who are in your custody, you’ve detained them or they’re in the back of your patrol car, you have a duty of care towards that subject,” the expert posited.  “In other words, since you have assumed control, physical control, over them and their movements, you are by definition responsible to protect them in any situation.”

Obayashi predicted that a civil lawsuit was highly likely, according to KUSA.