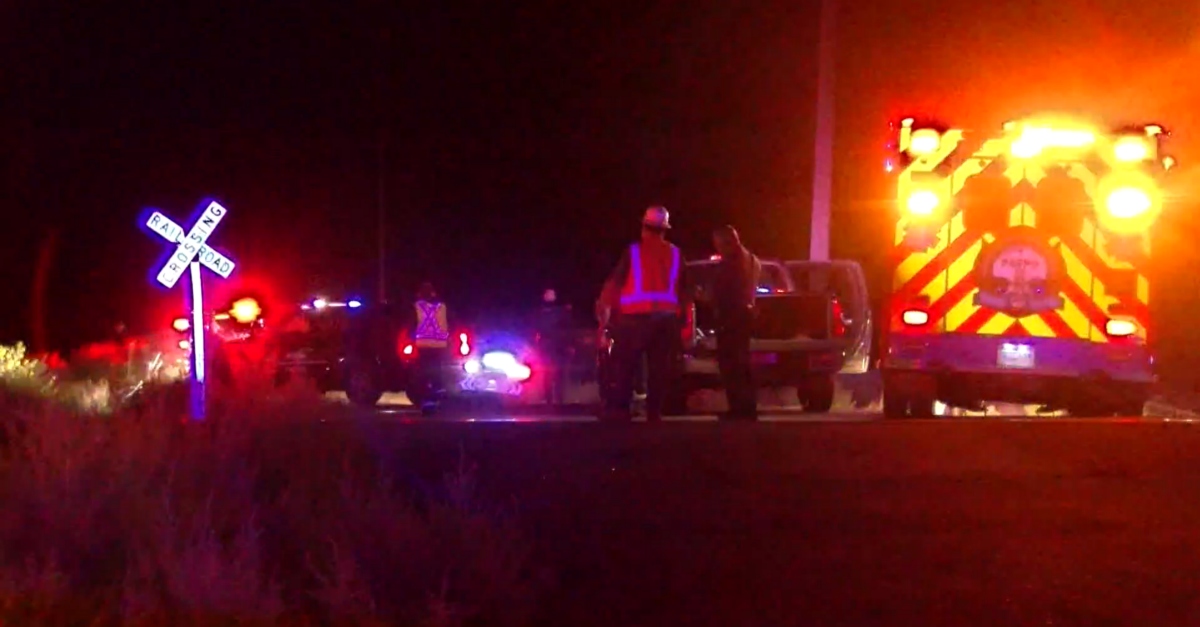 First responders at site of collision between train and police vehicle in Platteville.

Cops allegedly left a female suspect inside a patrol vehicle that one of them parked on train tracks — a train struck it. Now the young woman is in “serious” condition.

All this stemmed from an alleged road rage incident.

“Although early in the investigation, it’s believed the initial call was reported as an alleged road rage incident involving a firearm in Ft. Lupton earlier in the evening,” the Colorado Bureau of Investigation said in a statement obtained by Law&Crime.

An officer with the Platteville Police Department found the vehicle on U.S. Route 85 and County Road 38, the agency said.

“The driver of the vehicle pulled to a stop just past the railroad tracks, with the patrol officer behind the car on the tracks,” the CBI said. “Two Ft. Lupton officers arrived on the scene and the team conducted a high-risk traffic stop and detained a lone female occupant (age 20, Greeley) placing her in the back of the Platteville patrol car detained on suspicion of felony menacing. While the officers cleared the suspect vehicle as part of the investigation, a train traveling northbound struck the PPD patrol car.”

The woman, identified only as a 20-year-old from the city of Greeley, was taken to a hospital there for treatment, authorities said. She sustained “serious bodily injuries,” the CBI said.

“Her condition is unknown at this time,” they said.

Authorities are splitting up this investigation because of the various elements involved, the CBI said. Fort Lupton police are looking into the incidents leading up to the initial call to cops. The Colorado State Patrol is handling the “serious-injury traffic accident” of the train and Platteville police patrol vehicle.

“The Colorado Bureau of Investigation has been requested to investigate the serious bodily injury to the individual while in police custody,” the CBI said.

The investigation is ongoing. Platteville Police Chief Carl Dwyer said in a statement that the officer involved is on paid administrative leave during the investigation.

“The Town of Platteville is cooperatively working with CBI and CSP during their investigation regarding this incident,” he said. “The Platteville Police Department has nothing to add to CBI’s press release yesterday.”