But … What if Trump Had Testified? 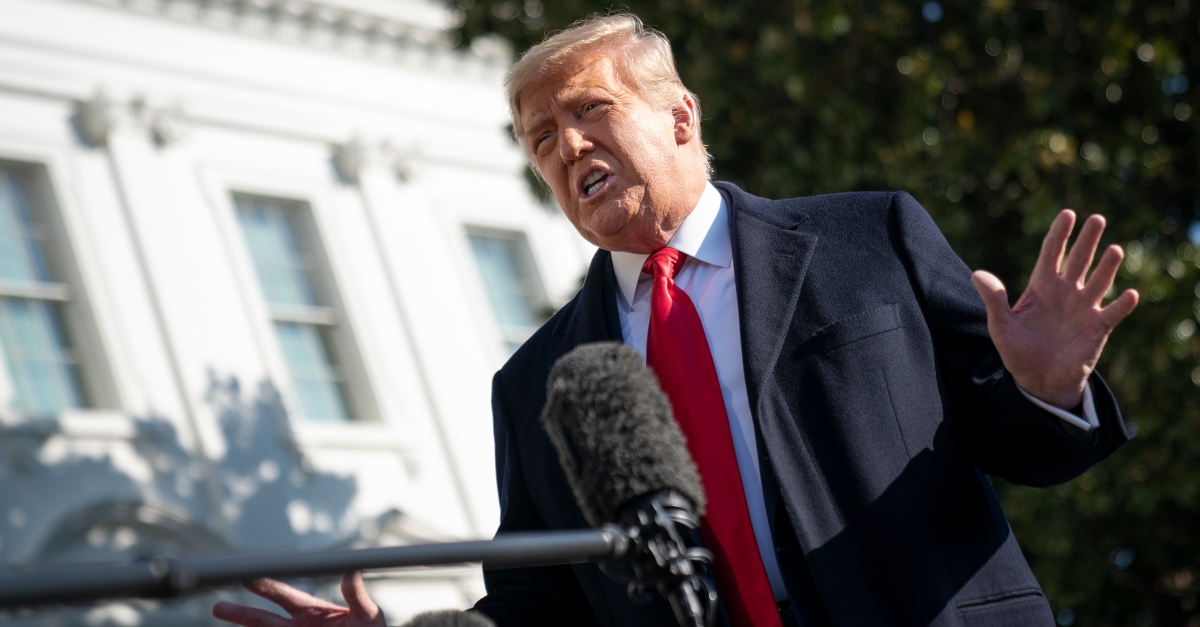 The impeachment trial of Donald Trump was brief. It’s now over. The result? Totally predictable. Going in, each “juror” inescapably suffered from bias. The outcome, largely decided on party lines, was therefore preordained. Literally everyone knows exactly what happened that awful day in January. Yet 43 senators weren’t persuaded to convict.

But could it really have been otherwise? Could anything have changed it — when 43 Republican senators reflexively concluded that the Senate simply lacked jurisdiction to try a president no longer in office?

The one thing missing that might possibly have forced the reflexive “acquitters” to convict, was direct evidence of the president’s “state of mind.” Meaning, what was in Trump’s mind on Jan. 6 when, as any sentient being would admit in the dark night of his soul (including Mitch McConnell), Donald Trump poured gas on an event and people already inflamed.

Did Trump intend, or even perceive as foreseeable, that his antagonizing words at the Ellipse would lead to a riotous insurrection that failed? Or, as Trump’s lawyers would prefer to call it: an “action.” After all, for a specific time and date directly connected to the election certification, Trump had invited an already angry crowd — true believers in his “Stop the Steal” mantra. The message of his “invitation” was inescapable: “Be There. Will Be Wild.”

Yet, what was in his mind? We’ll never really know for sure. John Henry Wigmore, the heralded expert on the law of evidence, called cross-examination “the greatest legal engine ever invented for the discovery of truth.” And so, without cross-examining Donald Trump we — maybe, astonishingly, even he — will never really know the exact “truth” of what was at play in the deep recesses of his mind when he told the crowd to march.

Nota bene, Trump’s “state of mind” when exhorting the crowd to “march” is not only determinable by what he thought at that precise moment, but also by his relevant thoughts and actions both before and after that moment. Indeed, what existed in Trump’s mind beforehand, and what Trump did and said afterwards also dramatically reflect on his mindset at the critical moment when he uttered those simple, yet rousing words: “March to the Capitol.”

Yes, the House Managers did try to get to the bottom of it. They did forward an effete “request”  — not a subpoena — “asking” Trump for an interview (designed to get at that state of mind). There was no chance that he would submit, though. Trump’s lawyers blew off that request immediately (unlike Rudy Giuliani jerking Special Counsel Mueller around for nearly a year before declining Mueller’s request for Trump’s testimony), knowing exactly what the Managers were trying to accomplish.

Whether or not Trump’s lawyers even knew Trump’s “truth” — or had even discussed it with him — they surely recognized that even if Trump was totally “innocent” of the lone Impeachment Article alleging that Trump had incited insurrection, they recognized that Trump idiosyncratically lacks the capacity to weather a storm of hostile questions. The clever witness answering a hostile questioner’s fusillade anticipates the next question. Would Trump, however, be able to? Or would he reflexively try to swat away the immediate question, or lash out against the questioner for her insolence in even posing it? Every criminal lawyer knows that a defendant’s testimony to defend himself can wrest defeat from the jaws of victory. And here, “victory” was almost certain – so why risk it? Some wonder, still, why the House Managers let Trump “off the hook” by not subpoenaing him.

All this said, could anything have possibly changed the result, making it impossible for the Senate’s 43 “acquitters” to vote to acquit? To try to answer that question, let’s hypothesize the almost unimaginable — that Trump had agreed to submit to an oral deposition or testimony. Twelve questions, no more. No follow ups. No demands or requests for clarification. Just twelve questions. What, optimally, might those questions have been to get at Trump’s state of mind? To that end, consider these and Trump’s likely answers, keeping in mind the limitations imposed by this exercise:

1. Mr. President, on January 6 you had absolutely no desire whatsoever to encourage the thousands of people at the Ellipse to storm the Capitol and engage in an insurrection, riot or any violence whatsoever, isn’t that correct?

2. In fact, sir, as your lawyers have argued to the Senate, the Capitol storming intended to “Stop the Steal” was pre-ordained and premeditated. Those who stormed the Capitol and engaged in the violence that occurred had planned it long before you uttered a single word on January 6, correct?

3. And, sir, their actions turned out to be totally antithetical to what you personally wanted. In fact, on January 7, you unambiguously condemned the storming and, at the Ellipse, you had told the crowd to protest at the Capitol ”peacefully” — correct?

4. So, sir, given that, when you realized, moments after your speech ended, that many in the crowd were breaching the Capitol, climbing its walls, piercing doors, violently breaking windows, and fighting with police officers, you were outraged, appalled. What you stood for as President — namely, Law and Order — had been overtly violated by the mob, correct?

5. So, Mr. President, facing that, you turned directly to your Twitter account, went right to the White House media room, to “demand” that the rioters immediately desist from what they were doing and leave the Capitol, correct?

6. And, sir, without a moment’s hesitation, you, as Commander in Chief, called upon the National Guard and any regiment you could employ to immediately quell the violence you were actively watching on your screen, true?

7. That’s right, no. The reason that you didn’t do that was because you were actually delighted by what you saw occurring at the Capitol for hours following your speech, isn’t that a fact?

8. So, if, as you maintain, you weren’t happy with what you were seeing, why in God’s name didn’t you move heaven and earth to immediately to stop it — fully aware that you, sir, more than anyone else in the world, had the ability to ask, to persuade, to even demand, your followers to withdraw and immediately leave the Capitol?

9. I ask you sir, under penalty of perjury, isn’t it a fact that Minority Leader McCarthy called and pleaded with you to call off the riot and employ the military to immediately quell the riot because the rioters were “your people,” but you responded that some people apparently cared more about the election than McCarthy?

10. Again, under penalty of perjury, when you spoke to Senator Tuberville during the riot he told you that Vice President Pence — who had refused your demand that he not certify the election — had been evacuated from the joint session given dire threats to his personal safety. Did you in the wake of hearing that from Tuberville tweet that Mike Pence “lacked courage” or did you not? Again, sir, penalty of perjury.

11. Mr. President, late that same afternoon, after the horrendous riot that followed your speech at the Ellipse, your tweet, intended for your crowd that had stormed the Capitol, said: “We love you. You’re very special. You’ve seen what happens. You see the way others are treated that are so bad and so evil. I know how you feel.” But, yet, you said absolutely nothing to suggest that the rioters had been wrong to storm the Capitol, correct?

12. And last question, sir, on January 7, the next day, when you condemned the demonstrators who stormed the Capitol, saying that you were outraged by the violence, lawlessness and mayhem, you specifically said that “I immediately deployed the National Guard and federal law enforcement to secure the building and expel the intruders.” Pain of penalty again — that sir, was an outright lie, wasn’t it?

Now, we all pretty much know how Trump would have answered these questions. Would gaining those answers at the trial — basically, admitting that he did nothing to quell the riot, yielding added proof that he actually had wanted it (somehow believing that the riot would somehow delay the electoral vote certification) have mattered to senators who voted to acquit? No. They were locked in to their tactic, and it was clearly a tactic, that the Senate couldn’t try a president no longer in office.

Would his answers have influenced that segment of the public that had been willing to give Trump the benefit of the doubt, given that the House Managers couldn’t magically invade Trump’s head for his true intentions? Would hearing directly from Trump, no longer having to rely on the circumstantiality of the evidence otherwise presented, have changed the minds of his supporters? We’ll likely never know the answer to these questions.

The perspective of history? Any hope there? Maybe the “truth” that Wigmore viewed as best discoverable through cross-examination, sometimes requires the passage of time to finally rise to the surface. We, each of us, observe current events through the cloudy, even dirty, windows of partisanship (and subjectivity). The more pristine perspective often exists through the far clearer windows of retrospection. But by then, when time has passed, even without cross-examination, those who wish to consider the events of January 6 won’t require President Trump’s testimony to tell them what was truthfully his intention.

The videotapes will tell them all they really need to know.