Robert Durst is seen in a March 10, 2020 courtroom photo. His attorneys say his condition has deteriorated since then.

Attorneys for real estate heir Robert Durst have filed court papers seeking an indefinite delay in the accuser killer’s already-delayed murder trial. Citing Durst’s “physical incompetence to proceed with trial,” the defense is asking a California judge to release Durst on bail — and for a Monday evidentiary hearing to support their claims that Durst is too ill to proceed.

Durst’s trial was scheduled to resume on May 17. It had previously been delayed because of the COVID-19 pandemic, despite opening arguments occurring in March 2020. That was right before massive shutdowns plagued the country and its courts.

“Specifically, Mr. Durst has a myriad of life-threatening health issues, including bladder cancer (which is not being treated),” the defense wrote. “In addition, Mr. Durst respectfully requests an Order of release on bail with conditions including:  (1) GPS Monitoring; (2) A high bail amount; (3) Release to a medical facility so that Mr. Durst can receive appropriate treatment; (4) Additionally, Mr. Durst will pay for and provide his own security.”

“Here, if Mr. Durst is forced to undergo the rigors of trial (and trial preparation), he faces serious risks to his health, and possibly to his life,” the defense added — citing a medical report prepared by Dr. Keith L. Klein which the defense characterized as “alarming.”

Klein’s report, cited in part within the defense motion, referred to Durst’s “debilitating condition,” his “difficulty in daily travel to an outpatient clinic,” and the need to “urgently hospitalize” Durst for “intravenous nutrition” and other treatments. Klein also said Durst’s care should be “rendered by Board Certified academic faculty and not by nurse practitioners, medical students, or residents in training.” It warns of “gait and bowel disturbances preceding dementia.”

The defense argues that these and other ailments make it impossible for Durst to receive a fair trial under the Due Process Clause (under the Fifth and Fourteenth Amendments) and under the Sixth Amendment.

“Mr. Durst seeks to testify in this case,” the defense said. “If so, he would likely be on the witness stand for several days during which he could be expected to be subjected to thorough and intense cross-examination. This would be particularly difficult since Mr. Durst would necessarily testify several months into the trial, after the prosecution presented their case in chief. As such, Mr. Durst, would face the dilemma of deciding to either forgo what may be his best and intended defense, or to take the risk that the stress of testifying might result in serious injury or death. As such, the medical evaluation from Dr. Klein indicates that Mr. Durst cannot withstand the rigors of trial.”

Durst is accused of murdering his friend Susan Berman in California on December 23, 2000. That killing is the subject of the current proceeding. He is also accused by California prosecutors of killing his wife Kathie Durst in New York in 1982, though he has not been directly charged in that case. Robert Durst was sentenced on a gun charge in New Orleans in 2016 after pleading guilty in that case. He was tried but acquitted in the death and dismemberment of his neighbor Morris Black in Galveston, Tex., in Sept. 2001. Durst was living there disguised as a mute woman.

The defense followed with scads of case law involving other cases which were shut down on account of a defendant’s health. The defense included a chart which suggested how difficult a trial would be if the Durst case was forced forward: 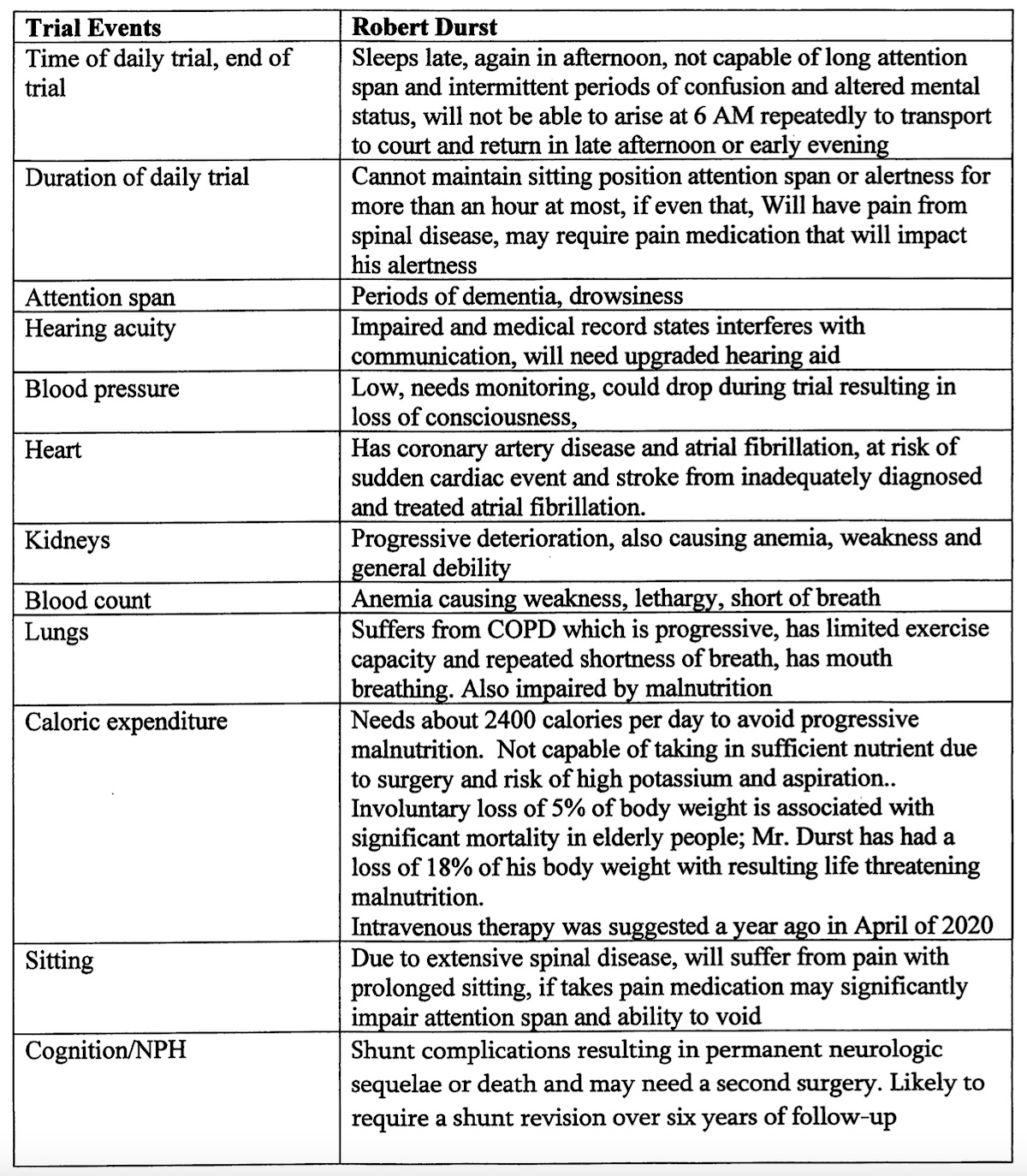 “As detailed in Dr. Klein’s report, it does not appear that there are any suitable measures that could be under taken to minimize the risks to Mr. Durst’s health,” the defense said. “Mr. Durst is in need of significant treatment, and he is not receiving the proper treatment in custody.”

The motion is not the first time the defense has moved to shut down the case. The defense moved for a mistrial after the COVID pandemic shut down the case. It also moved for a mistrial by arguing that the lead prosecutor in the case, John Lewin, qualified as a witness. Ethics rules prevent attorneys from serving as witnesses in the same cases they litigate, though there are exceptions.

Durst was described as “frail” in a New Orleans newspaper article in 2016.

The Law&Crime Network will cover Monday’s hearing. You can watch the hearing on LawAndCrime.com and on select streaming and cable providers.

Read the Durst motion below: