Robert Durst Trial Is Going to Be Suspended Because of Coronavirus Outbreak, Report Says 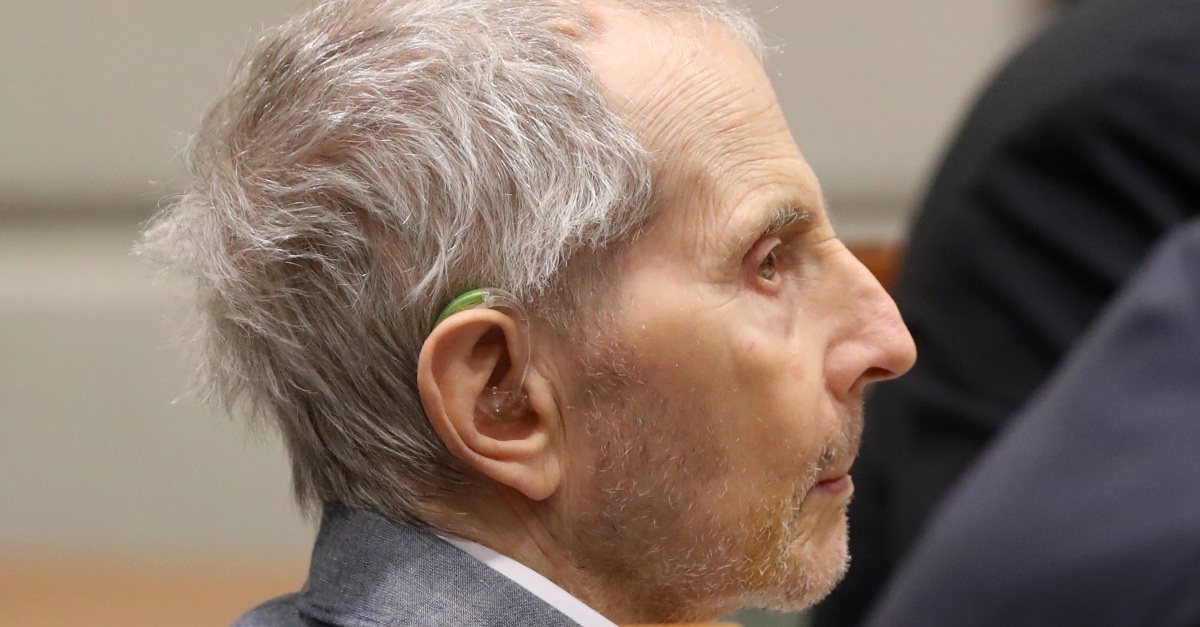 It took years for Robert Durst to go to trial for allegedly murdering his friend Susan Berman in December 2000. Now we are going to have to wait a little longer before it wraps up. The proceedings are going to be suspended until April 6 because of the “coronavirus” (COVID-19) outbreak, according to two sources cited by CNN. Los Angeles Police department spokesman Josh Rubenstein also confirmed an internal police memo that said all jury trials in Los Angeles County would be suspended beginning Monday.

There was no live stream of the trial, but the Law&Crime Network was set to air audio.

Depending on who you ask, Durst needed to face justice for almost 40 years. His wife Kathleen McCormack Durst disappeared in 1982. Then-Westchester County District Attorney Jeanine Pirro reopened an investigation into the matter in November 2000. Prosecutors say that Durst went to Beverly Hills, and killed long-time friend Berman at her home. Then, after that, the defendant went to Texas, and posed as a mute woman. Durst shot and killed neighbor Morris Black, and dismembered the body.

#RobertDurst – Lewin: What the evidence is going to show is that Bob Durst killed his wife and then he told Susan Berman it was an accident and he needed her help. pic.twitter.com/ryw3PLR83T

#RobertDurst – Lewin: Susan Berman dated a man with two kids, when they broke up she was extremely close to them and the daughter even lived with her. Mella Kaufman will testify that Susan told her she had been the alibi after Durst’s wife disappeared.

#RobertDurst – Lewin: Susan Berman dated a man with two kids, when they broke up she was extremely close to them and the daughter even lived with her. Mella Kaufman will testify that Susan told her she had been the alibi after Durst’s wife disappeared.

The defendant went to trial for killing Black, but his defense (including current co-counsel Dick DeGuerin) got him acquitted for murder in 2003, arguing the shooting was self-defense. Durst testified, and admitted to the dismemberment and to posing as a woman. Black’s head was never found.

#RobertDurst – DeGuerin says Durst knew police would never believe him that the shooting was an accident. He tried to move the body, but couldn’t. He decided he needed to dismember the body. “Bob doesn’t make good decisions,” DeGuerin tells the jury. pic.twitter.com/aPStdf4Mz6

#RobertDurst – There is no evidence to connect the death of Morris Black to the disappearance of Kathie Durst and more importantly the only thing you can decide in this case whether Bob Durst is guilty of killing Susan Berman. He did not kill Susan Berman. DeGuerin sits down.

The defendant is only currently charged in Berman’s death, but Los Angeles Deputy District Attorney John Lewin is trying to argue that Durst not only murdered her and Black, but Kathie McCormack too.

Naturally, the defense asserts their client is innocent. In opening statements, DeGuerin told jurors that Durst walked in on Berman’s dead body. The defendant panicked, ran, then later wrote an anonymous letter to cops about her, said the attorney.

#RobertDurst – DeGuerin says Bob went to Susan’s as they had planned and he found her dead. He panicked. He sent the cadaver letter and ran. “That’s what Bob did. He ran.”

Clearly, both sides agree that the letter ties Durst to the crime scene, but the prosecution presents it as evidence of guilt.

#RobertDurst – Lewin: “Susan was executed, shot in the back of the head at close range.” Police received an anonymous letter w/Berman’s address and the word “CADAVER”. Lewin says that’s an interesting word for someone to use. Kathie Durst was in medical school and used that term pic.twitter.com/UGgecpUcuP

Durst is 76, and has been having health problems the past several years. He turns 77 on April 12.