Attorney Michael Avenatti listens to a question during a news conference with Battle Born Progress, a progressive communications organization, on Aug. 31, 2018 in Las Vegas, Nevada. (Photo by Ethan Miller/Getty Images)

Reaching a new nadir for the celebrity lawyer, Michael Avenatti racked up more federal convictions on Friday, as a second Manhattan jury found him guilty — the time of defrauding Stormy Daniels and stealing her identity.

Over the course of a little more than a week, federal prosecutors laid out the case of Avenatti’s rise to prominence and his free fall through the story of his former pornographic film star client. Daniels had been trying to wiggle out of her non-disclosure agreement that kept her from going public with her alleged affair with former President Donald Trump. Avenatti represented her in that fight—and made them both social media and cable TV stars in the process.

For both, fame and notoriety came with other other opportunities, like a book deal that Daniels described as the culmination of a decade-long dream to write a memoir. She scored that deal, with the help of Avenatti and a ghostwriter, for a book ultimately published by St. Martin’s Press under the triple-entendre title “Full Disclosure.”

On the third day of deliberations, a jury note suggesting one female juror refused to budge from her position.

“We have one juror who is refusing to look at the evidence and acting on a feeling,” the note read. “We need assistance in moving forward. She does not believe she needs to prove her side using evidence and refuses to show us how she has come to her conclusion. Please help us move forward.”

The handwritten note’s entreaty was underlined in original, and it added that this juror was not “going on any evidence, all emotions.” Dozens of text messages showed Avenatti telling Daniels that her publisher hadn’t sent her advance payments, after the date bank statements showed he received and spent it. 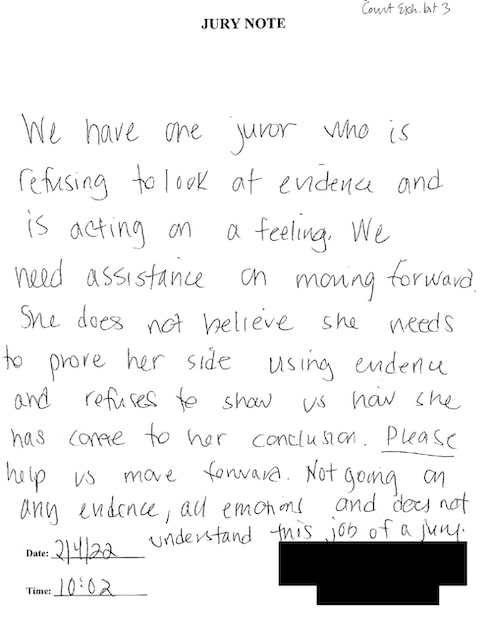 The jury that convicted Michael Avenatti of defrauding Stormy Daniels entered this note hours before reaching their verdict.

After the apparent deadlock, U.S. District Judge Jesse Furman ordered the jurors to return to their deliberations with an open mind and scrutinize the evidence. He denied multiple motions by Avenatti for a mistrial.

Hours later, the panel finally reached a unanimous verdict. They convicted on both counts, apparently accepting Daniels’s charge against her former lawyer over the course of two days of grueling testimony: that “he lied to me and stole from me.”

As the jury entered the courtroom and took to their seats, they cast their eyes toward the judge rather than the defendant. The judge recited their two counts of conviction, as Avenatti clasped his hands together and shot his gaze alternatively toward his hands and in front of him.

Asked by a reporter outside the courtroom if he regretted representing himself, he replied: “No, not at all.” He dropped his attorneys early during the trial—except as standby counsel—and grilled Daniels and other witnesses himself.

For Avenatti, the verdict marks the latest humiliation from a man once rumored to be contemplating a presidential run and esteemed in some corners as a legal superstar of the Twitter-branded #resistance to Trump.

That plummet began nearly three years ago, when federal prosecutors in late March 2019 from coast-to-coast announced three indictments on an array of alleged financial crimes. Though Avenatti described the charges as a payback for his vocal opposition to the Trump administration, two sets of juries in the deep blue state of New York have now ratified the charges leveled there. He was previously sentenced to two and a half years in prison for conspiring to extort Nike. He was released early from pre-trial confinement, in light of the COVID-19 pandemic, and his remand to serve that term was delayed by a pending appeal and his other trial.

Avenatti faces yet another federal trial in California, where the first attempt to prosecute him ended in a mistrial when the government failed to turn over potentially exculpatory evidence.

“As an attorney and fiduciary, Michael Avenatti pledged to advise his clients and act in good faith,” Williams said. “As evidenced by his second conviction by this Office in just three years, this time for stealing a book advance from his client, he did just the opposite. Rather than advise his clients in their best interests, Avenatti instead used his law degree as a license to steal. Michael Avenatti has once again been convicted by a unanimous jury for blatant abuse of his privilege to practice law and for betraying his solemn responsibility to his clients.”

“The text communications between Stormy and Mr. Avenatti in real time was overwhelming proof of his deceit and embezzlement,” her statement reads. “The forgery of her name and his concealed directive to wire the money to him was irrefutable. Still, Mr. Avenatti possesses the uncanny ability to steadfastly deny the crimes and persuade others that he was entitled to the embezzled funds. Stormy is pleased that the justice system worked.”

Avenatti insisted that he was innocent and that he was entitled to the hundreds of thousands of dollars in book advances that landed in her bank account. Prosecutors entered numerous text message exchanges with his former client undermining that defense. Over the course of several months, Avenatti apparently told Daniels that he did not know why the publisher was late on her payments—long after the time prosecutors say he received and spent that money.

Expressing disappointment in the verdict, Avenatti told reporters he is disappointed in the verdict and is “looking forward to a full adjudication of all of the issues” on appeal.

Though Avenatti faces up to 22 years in prison, his actual term is expected to be much lower. Former federal prosecutor Mitchell Epner expected Avenatti’s federal sentencing guideline calculations to fall somewhere above five years at the bottom end and below seven years at the higher end. Those guidelines are congressionally-mandated metrics prosecutors use to recommend a sentence to a judge, who can go above or below that.

Avenatti must surrender by 5:00 p.m. Pacific Time on Monday. His sentencing date has been tentatively scheduled for May 24 at 4 p.m. Eastern Time. Though his retrial in California is slated for earlier that month, Avenatti said that it’s likely to be delayed pending his appeal there to the Ninth Circuit.

Update—Feb. 4 at 5:09 p.m. Eastern Time: This story has been updated to add context and statements by the U.S. Attorney and Avenatti.