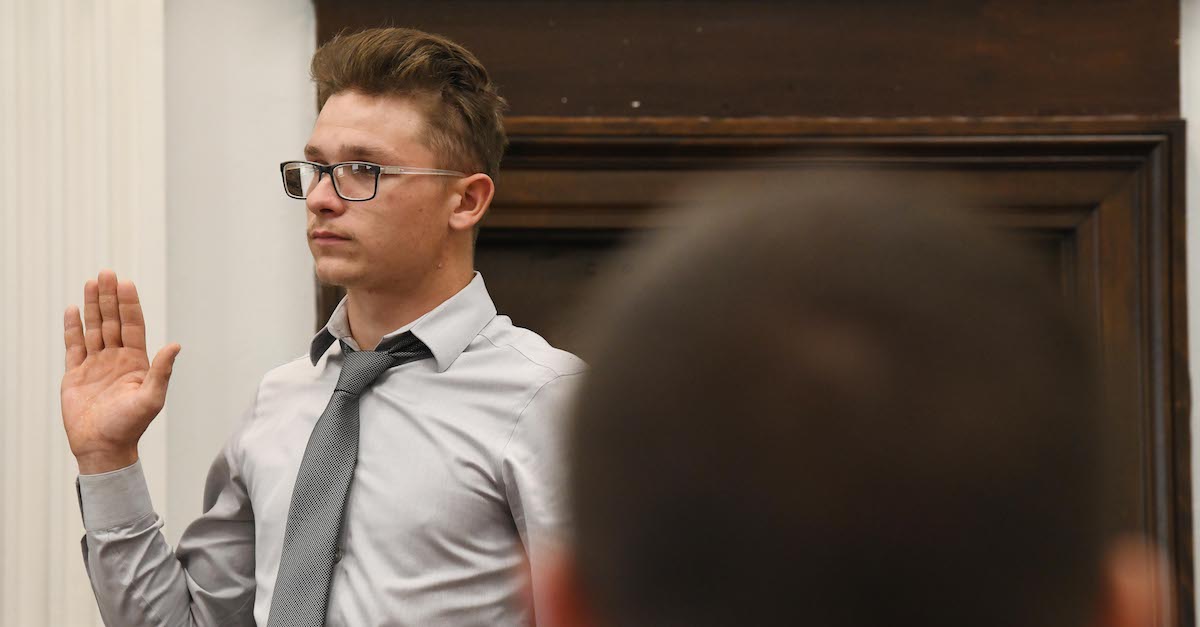 Dominick Black, who bought the AR-15-style rifle used by Kyle Rittenhouse, prepares to testify in Nov. 2, 2021.

Dominick Black, who bought Kyle Rittenhouse the AR-15 used in the Kenosha shootings, has taken a plea deal on weapons charges, which was accepted by a judge on Monday.

“We have agreed to a fine of $2,000 here that Mr. Black will be responsible for paying as a consequence of this citation, and I believe that that does serve as a form of punishment and a deterrence to anyone going forward,” Kenosha County District Attorney Thomas Binger, who prosecuted Rittenhouse, said at the hearing.

Judge Bruce Schroeder, who presided over Rittenhouse’s trial, accepted Black’s no contest plea to a count of contributing to the delinquency of a child.

“I do want to close by saying that I do believe that it is a serious offense to purchase a firearm for someone who is not legally able to do so,” Binger continued, adding that “it is still our office’s position that 17-year-olds should not go off with firearms.”

That was Rittenhouse’s age when he brought an AR-15 to a Black Lives Matter protest in Kenosha over the police shooting of Jacob Blake on Aug. 25, 2020.

There, in a sequence of events that divided the nation, Rittenhouse shot three men, killing two. The first, Joseph Rosenbaum, chased Rittenhouse and was seen lunging for his weapon before the then-17-year-old shot him to death. Anthony Huber, the second man killed, hit Rittenhouse with a skateboard before being shot. Gaige Grosskreutz, who survived being shot, conceded on the witness stand that he pulled out a weapon on Rittenhouse first and did not tell police he had one.

Before Rittenhouse’s acquittal on homicide and other charges, Judge Bruce Schroeder dismissed a more minor count: possession of a dangerous weapon by a person younger than 18. The semi-automatic firearm did not fit the definition of “short-barreled rifle” under Wisconsin law.

“The jury can measure it,” Schroeder said before dismissing the charge, referring to the barrel length.

That finding weakened the case against Black, who was the first witness to testify for Rittenhouse. Black, 20, previously faced two felony counts of intentionally giving a dangerous weapon to a person under the age of 18 causing death since November 2020, court records show.

Black’s attorney Tony Cotton emphasized that the resolution avoids a criminal conviction for his client.

“Justice was done,” Cotton told Law&Crime in an email. “The District Attorney’s Office did the right thing by amending the felonies to a non-criminal ticket. Dominick is a fine young man with an incredibly bright future and it is good that he was given a resolution that allows him to keep his clean record intact.”

Judge Schroeder accepted the stipulation “with a few changes,” court records show. He then dismissed the criminal case, imposing the $1,500 fine plus costs.