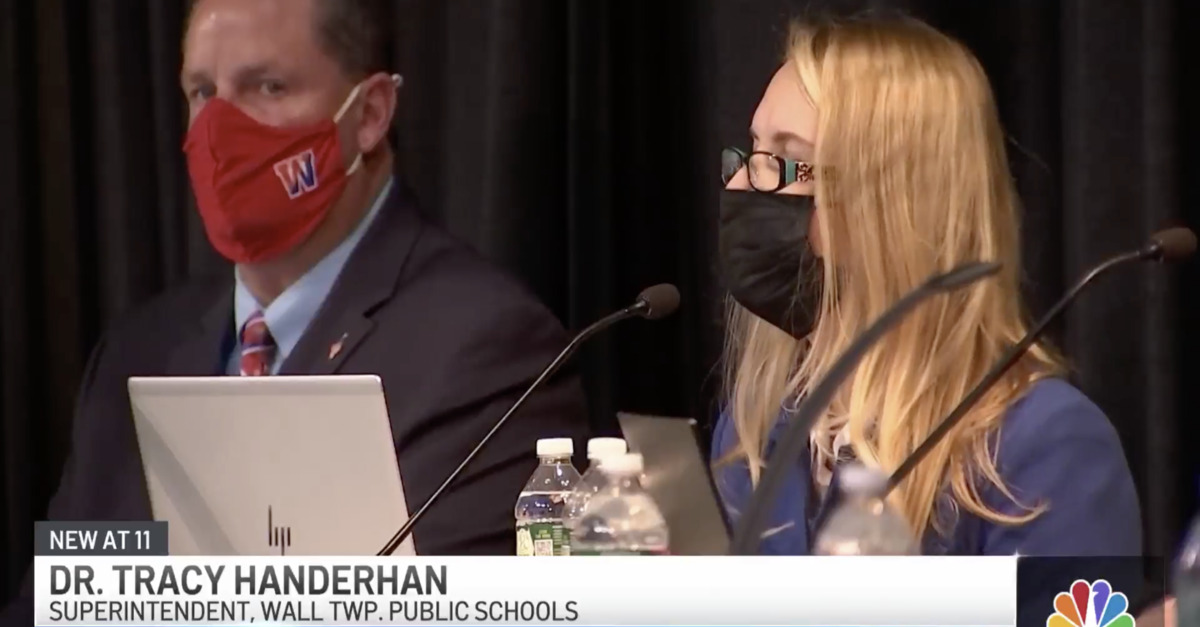 A series of criminal complaints have been filed against an unspecified number of high school students in New Jersey.

According to Acting Monmouth County Prosecutor Lori Linskey, the charges are being filed “as the result of two separate investigations” into hazing allegations that have scandalized the Wall Township High School for several months starting late last year.

A press release from the prosecutor notes that juvenile complaints charge the students with hazing, attempted criminal sexual contact, criminal sexual contact, false imprisonment and harassment. The release says “the specific number of juvenile defendants involved is not being disclosed” in accord with “the confidentiality tenets” of the New Jersey Code of Juvenile Justice.

Under Garden State law, the juveniles’ identities cannot be released by law enforcement.

“The results of our investigations necessitated the filing of juvenile complaints against those involved in order to serve the interests of justice,” Linskey said. “[I]t is imperative that victims of hazing, harassment, intimidation, and bullying know that such conduct is not a ‘rite of passage’ and should not be endured without consequence in order to gain acceptance in social, club, sport, or academic settings.”

The charges are said to stem from “a series of incidents” in the football team’s locker room during September and October 2021.

According to NJ.com, videos of the hazing incidents have been shared among students and parents since October. The contents are both graphic, unsettling and contain what appears to be sexual violence.

One clip obtained by the outlet features four football players holding their victim and spreading his legs as a fifth boy “moves in holding a broomstick.” Others watch as “the victim is fighting back desperately.”

The thrashing victim eventually wrests free and grabs the broomstick but is quickly dragged across the floor as his assailant tries to recover control of the weapon. Someone off-camera shouts out, “Get his legs!” as music blares and the players can be heard giggling.

In a similar incident, another clip shows an entirely different football player pinned down on the locker room floor by his teammates and poked though his shorts with a finger by another student.

The hazing scandal was first reported on Nov. 9, 2021. That’s also the first time that any school authorities acknowledged the problem existed, with a typically anodyne and vague statement from Wall Township Board of Education President Ralph Addonizio.

Seven students were suspended from school in the immediate aftermath after media reports, according to Patch.com. The first student was suspended on Nov. 10, 2021, the day after New Jersey Advance Media first reported on the locker room attacks. The six subsequent suspensions occurred over the course of the next two weeks. In late December, during a special session, Wall education board members rescinded suspensions for six of those students.

The fallout has had numerous repercussions in the community, including electoral. One fierce critic of how the education board handled the controversy ended up winning election to the board itself on the strength of write-in voters–but declined to take her seat due to pending litigation against the agency.

The school’s athletic direcor Tom Ridoux was placed on leave as well as multiple coaches. Several football games were canceled.

After the hazing scandal broke, allegations also surfaced that multiple female students at the school had been sexually assaulted.

Parents and alumni have alleged that Wall High School officials have, for decades, downplayed and covered up instances of homophobia, bullying, hazing, racism and sexual assault.

“It’s obvious to all students and alumni that these recent situations are not isolated tragedies,” one student said at a board meeting in the days after the scandal broke. “They instead speak to a larger corrupt pattern of administration shrugging off incidents in order to save face and protect those who they deem their most valuable.”

“Initially, despite actively seeking information surrounding the rumors, nothing concrete emerged,” Wall Township Superintendent of Schools Dr. Tracy Handerhan said in the board’s defense. “We did not stop there. We continued to actively investigate.”